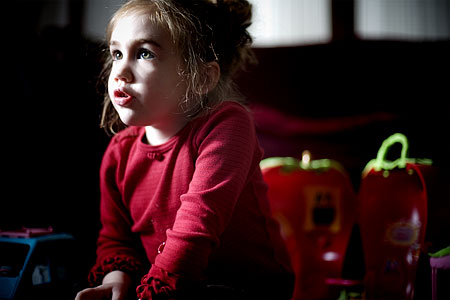 Yesterday you turned forty-six months old. I’m not sure where the last thirty days went, cannot believe that there are only three weeks until Christmas, but that’s not something I’m allowed to bring up in front of you because that means there’s only three weeks until that strange, gray-haired man breaks into the house and touches your stuff. Seems we’re having trouble communicating to you the whole idea of Santa Claus because every time I bring him up and try to celebrate the fact that he brings presents, you start looking around for places to hide your garbage, so he won’t be tempted to steal it. This puts Santa Claus into the same camp as the guy who washes the outside of our windows once a month and the employee from the city who checks our water meter: all are large, strange men who occasionally visit the house, and any one of them could be the reason your gum wrappers suddenly went missing. I know when I’m covertly leaving presents under the tree in someone’s living room, I’m looking out for empty pudding containers I could grab before flying back up the chimney.

This has also been the month of bargaining, of seeing just how low you can get us to go on the price, and I’m not sure yet that I can forgive your father for this development. He says that he and his siblings were masters at it in childhood, and that he knows exactly how your brain is working when I’ve told you that you can’t have a treat and your response is, “Can I have a treat soon? How about a treat in a minute?” This back and forth happens all day long, over every single decision that is made, from what we put in your lunch to how many stories we read before bedtime. Can you have this soon? What about later? How about tomorrow? And when I say no, not tomorrow, not even the day after tomorrow, you’re all, what about the day after that one? It doesn’t stop until I agree to give in at a specified time in the future, until I have given you hope of it ever happening. So I’ll finally cave and say, fine. You can have a cookie. In twenty years.

Your eating habits are as awful as they’ve always been, and your diet consists of about four beige foods: crackers, quesadillas, burritos, and Cheerios. In fact, you were the only one in your preschool class who refused to eat any turkey or stuffing during the Thanksgiving party and instead ate a heaping pile of goldfish crackers. This happened only a day after you had eaten nothing but raisins for six meals straight. According to some people, this alone is proof enough of my depravity, and that I’m probably right now hiding a bomb in my underwear. I guess there is some test out there that can directly tie my ability as a mother to the content of your stomach, which is weird because all this time I thought it was directly correlated to how many fingers you could fit up your nose.

Over the last few weeks your love for Dora has been slowly replaced with a raging passion for princesses, specifically Ariel the mermaid, and if you aren’t stroking her silky orange mane you’re saying every line out loud as you watch the movie. You also love to sing the songs, love to sing any song for that matter, even though you either haven’t developed a sense of tone or were not born with one. There is one particular song in the mermaid movie where she’s singing ah-ah-ahhhh up a string of notes, down a string of notes, and then back again as the evil squid witch steals her voice. I remember the first time I heard you singing along, it was this dead sounding EHHHHHHHHH, like a sick cow had fallen over in the mud.

I stopped whatever I was doing in the kitchen to listen more intently, to see if maybe I needed to run in and make sure you hadn’t broken a limb, and as the song grew louder, so did your forlorn accompaniment until the entire house was filled with the sound of your voice. It didn’t matter that you weren’t anywhere near the right key, that raucous, bellowing note electrified every joint in my body. I couldn’t see your face, but knew you probably had your hands above your head and were feeling it every bit as much as that mermaid. I lingered for a second on the thought that you might love music as much as I do and what that means about the years to come and the things we will both look forward to when your father looked at me and asked, “Is that our daughter, or is someone fondling a llama in our living room?”