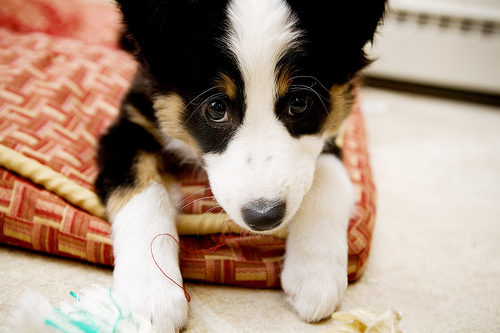 Last night it was my turn to take over the night shift with Coco, which means I had to sleep in the spare bedroom next to her crate and be available to take her outside when she needed to go to the bathroom. We know she is capable of going several hours without needing to go out, she did it the first night she was with us, slept nine straight hours and woke up refreshed and chipper and so incomprehensibly sweet that I gained five pounds just by looking at her face. But that was just a trick. A lie! An EVIL UNTRUTH. Because the second night she was here she woke up every single hour and cried until we took her out. And I had a hard time not calling her names and making crass jokes about her mother behind her back.

She’s down to two times a night now, and we’re trying to break her of one of those times, but she’s not having it, and last night I only got two hours and 24 minutes of sleep. But that’s okay because tonight it’s Jon’s turn with Miniature Satan, and I get to sleep in our king-sized bed alone after a brief affair with a large dose of Nyquil. I plan to kiss it with tongue.

Remarkably, I’m not feeling panicked about living with a puppy like I did when Chuck was this age, and that’s due to a number of reasons. One, we’re not living in an apartment where every thirty minutes I have to run down a long hall, down one flight of stairs, across 20 yards of concrete to the one patch of grass on the block. Here she has a huge yard to roam, and all I do is open the back door and point outside. Chuck reluctantly accompanies her and, following his lead, they both begin sniffing and circling the yard going, no, not there, not there either, maybe here? No, not here, wait, not yet, I think I’m getting closer, here? YES. HERE. THIS IS THE SPOT I WAS LOOKING FOR. Because that spot of yard is so very different from the THOUSANDS OF OTHER SPOTS IN THE YARD. DOGS ARE SO WEIRD.

It’s also quite nice to have an extra set of hands around, and knowing that Jon can take over watching her when I’m needed elsewhere has made it so that I’m not at all anxious even though I haven’t slept more than a total of 10 hours in the last week. And maybe it’s because Chuck was such a frat boy when he was a puppy and Coco is more of a scientist, but it’s just so much easier this time because her level of shitness is so much more manageable than his level of shitness. She doesn’t bite us or hide under the bed where we cannot reach her, she doesn’t steal toilet paper off the roll and leave it in saliva-soaked piles along a path from the bathroom to a mound of poop in the middle of the kitchen. Chuck was such a turd, and I remember one of those long nights that I stayed up with Leta when she was just a few months old thinking, yeah, this is hard, but at least she’s not chewing on my underwear.

Also, she’s just so adorable that having her around makes me feel like my veins have been injected with glitter. It’s impossible to focus on the sleepless nights when you walk from one room to another and she’s so excited to see you that her tiny docked tail starts wagging so hard that it makes her whole body tip over, like HI! IT’S YOU AGAIN! I HAVEN’T SEEN YOU IN AT LEAST TEN SECONDS!