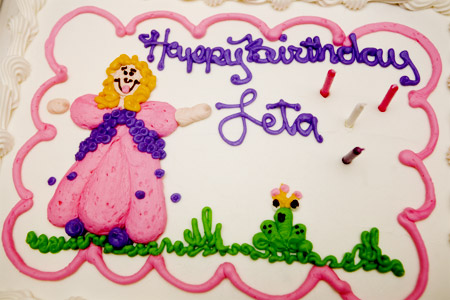 You are now four years old. To celebrate we gathered all the aunts, uncles and cousins on my side of the family to eat pizza and birthday cake, although you didn’t have a single bite of either. Why? Because that would have made sense? I’ve stopped trying to figure you out. Sometimes when I tell people about your horrible diet they assume that all we do is feed you junk, but I only wish we had it so easy. You’re so picky that you don’t even like chocolate milk. Or brownies. OR BIRTHDAY CAKE. If given a choice between a potato chip or starving to death, well, if it’s not the right kind of potato chip, and if it’s not sitting exactly where it should be on your plate? Then we might as well pour you a tall glass of embalming fluid. Over ice.

I guess it didn’t help that Grandmommy ordered the tackiest cake on the menu, either:

I think that’s supposed to be a princess? Maybe someone’s sickly Aunt Maude who battles recurring goiters? I had to laugh when I first saw this cake because that doesn’t look like any Disney Princess I know, and you’re very particular about your Disney Princesses. That company is very good at marketing to kids your age, and I was naive to think that you’d be able to escape its clutches. One night a couple of weeks ago we sat down to read a bedtime story, some book about a kid and his red winter mittens, and after demanding to do all the reading you go, “This boy has red mittens, and Disney Princesses are now available on DVD and VHS. The end.”

I guess the most significant thing that happened in the last month was that awful trip we took to San Diego, and I’ve put off writing about it because it makes me physically ill to think about it. I wonder if you’ll have any real memories of that trip, maybe of how excited you were to stay in a bed that wasn’t your own. Your father booked us into a pet-friendly hotel on the beach, and although I wasn’t expecting the walls to be lined with gold leaf, I certainly didn’t think I’d walk into that room and be smothered with the smell of urine. That was the scariest hotel room I’ve ever been in, and I was afraid to touch any surface for fear that I’d catch a deadly disease. This didn’t stop you from running right in and throwing yourself head-first onto the couch, a piece of furniture covered in mysterious stains, and shouting, “Are we here to play princesses?” That was so refreshingly innocent of you, to be able to overlook the fact that already half of your face had started to peel off, and be all, so? So what if there is a puddle of strange fluid on this pillow? What has that got to do with Cinderella?

We ended up driving to a different, much nicer hotel the following day, and you were just as excited to stay there as you were at the dumpy one. That night when we were all a bit too sick to try and eat out at a restaurant we ordered room service, and the cart they wheeled our meal in on was so fancy you declared, “This is so lovely!” It was, in fact, rather lovely, was perhaps the highlight of our entire vacation, right behind the couple of walks we took on the beach with the dogs. You came with us on one of those walks but only lasted five minutes on the beach because the wind was so overpowering. Plus, you didn’t want your feet to touch the sand, even though you had shoes on. I laid out a towel for you to sit on, but the towel itself was touching the sand and that meant there would only be one degree of separation between you and the sand, and you were perfectly fine hanging there from my neck, thank you very much. There’s a sinister part of me that wants to start sprinkling sand in your covers while you’re sleeping. And then tell Coco to sit quietly next to your bed so that when you wake up, the first thing you see is her looking at you. We’ll call it Therapy.

I was surprised how well you did with the long drive to and from Southern California as it was by far the longest ride in a car we have ever taken with you. We spent six to seven hours each day on the road, and before then the longest you’d ever had to sit confined in that back seat was an hour and a half. I was so proud of your patience and willingness to roll with the punches, at least until we came down a large hill close to San Diego and your ears popped. I think your personality can best be summed up by those last two hours in the car, by the intense screaming you did because your ears hurt, understandably, and the way you refused to listen to any of our suggestions to make things better. Both your father and I yelled ideas from the front seat — yawn! swallow! chew a piece of gum! — and each time we were met with BUT I DON’T WANT TO. I am not even kidding, this went on for an hour, the screaming about NOT WANTING TO until you were so exhausted from fussing that you passed out cold. For the next forty miles you slept soundly until a bump in the road woke you up, and for a few quiet seconds you looked around like, hmm, where am I, what’s going on? Until you realized, wait, wasn’t I in the middle of doing something? Something important? Oh yeah, right! I was in the middle of letting them know that AHHHHH! I DON’T WANT TO YAWWWNNN!

As I think over the last year that we’ve spent with you I’m forced to admit that it hasn’t been the easiest. Three kicked our asses and was by far more difficult than two. Maybe because you’re so much more verbal and have very specific ideas about the way things should be. Maybe because your feet are bigger, and it hurts more now when you kick our shins. I think I’m having a hard time writing this newsletter today because the last few weeks have just been so incredibly hard, and even this morning after several hours of fighting you over every little thing your father and I looked at each other like, can we make it through another day alive? His money was on “no.”

Just yesterday I got a letter from a reader of my website who said she felt inspired to send me the story of her son who died when he was very young, how she feels that he had chosen her as a mother before he was born because she was the one best suited to take care of his specific needs before he died. I’m not a very spiritual or religious person, but her story was something I desperately needed to hear yesterday if only as a means to give me some perspective. And however asinine it sounds, it helped yesterday thinking that you were sent to me for very specific reasons, that something inside of me is supposed to be called upon in regard to who you are as a person. You are unlike any other kid I’ve known, more challenging, more stubborn, often more cantankerous. And maybe I’m the one who is supposed to be able to see through all that and realize it’s because you’re smarter, more intuitive, and often more sensitive. And not just because we are bound together by blood, but because certain situations and relationships in my life previous to you have prepared me for what you can throw. It’s a comforting albeit fantastical thought that maybe you knew before I did that you’d really need me. So just in case, I want you to know that I’m honored you had so much faith that I was up to the task.