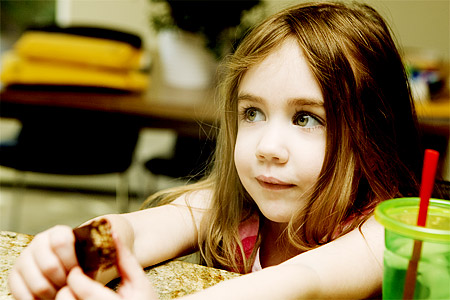 Tomorrow you turn fifty-two months old. It’s a number you can easily count to, although recently counting things has become much too boring to hold your interest. Counting and the porn business that we run out of the basement, you’re all ANOTHER HOOKER IS USING MY TOOTHBRUSH, ARE YOU SERIOUS? That’s what someone suggested to me the other day, that our lives must be nothing but drugs and sex and guns going off in the middle of the night, or at least that’s what they hoped was the life of someone who blogged for a living. What do you think, should I tell them the truth? That yes, that’s exactly what our lives are like, and it’s made even better by the orderly way you’ve taken to organizing our cocaine in straight, easily-snortable lines? At least you used to until your father and his hookers started staying up all night, and you couldn’t go another day without sleeping. You’re so over it now, kind of like when I ask you if you can count to one hundred and you go, “One, two, three… blah blah blah… one hundred.” I guess they have calculators for that now anyway.

People had always told me to look forward to your fourth year, so the magical transformation that has happened to you in the last month may just be a part of the whole fourth-year phenomenon (PLEASE GOD, DON’T LET THIS BE A PHASE), or maybe it’s just because it finally stopped snowing (great, now that I brought the Universe’s attention to that fact it’ll snow tomorrow, and when it does you’ll know why Mama took a rifle and shot the weatherman). For months you have begged us to go outside and blow bubbles and swim, and we’ve said we had to wait until all the snow melted. And for months you would wake up in the morning, look hopefully out your bedroom window and ask today? Has the all the snow melted today? And I had to say, no, not today, even though there are kids right now sunbathing in Alaska, today the kids in Utah are totally screwed. AGAIN. And then I blamed it on the Republicans and the fact that they eat babies.

But look! I didn’t blame it on the Mormons! LOOK AT ME GROW!

Well, the snow finally melted, and we have been swimming and blowing bubbles like mad, and the change in your mood has been so exaggerated that I think maybe you had a hard time living through this winter, too. You seem much more invigorated by life, much more inspired to create stories and tell wild, imaginative tales. Your favorite stories are silly stories, all of them of course involving some form of donkey belly, bonkey delly, dookey boppy, or poopy smelly. At night after we read you a book or two you want us to lie with you for a few minutes before you sleep and tell you a silly tale. I’m not as good as daddy is at this activity because he was once a 13-year-old boy, and I don’t have that kind of experience. But you love it when I talk about pink apples (!) or purple bananas (!!) or orange limes (!!!), because HOW SILLY IS THAT? Quite silly, apparently. One night we were both laughing so hard that your father asked what we’d been doing in there, he could hear us all the way across the house. And I was all PURPLE BANANA, GET IT? And he was all, excuse me? And I was all OBVIOUSLY YOU HAD TO BE THERE.

You still love to tell stories about princesses, and I get the feeling that your princess obsession has only just begun (along with my slow descent into hell). It’s recently become so bad that you refuse to wear anything but a dress and will not let me pull your hair out of your face “because Sleeping Beauty doesn’t wear her hair that way.” Do what? I’m sorry, but you cannot sit there and tell me that she didn’t get fed up once or twice and stick that wiry mane in a pony tail. I’d like to take that woman out back and say a few things about the example she’s setting, because do you know how many times a strand of your hair will get caught in your meal, and then there’s AHHH! THERE’S HAIR IN MY SPOON! SCREAM, SCREAM, SCREAM, TEARS, GNASHING OF TEETH, TORNADO, EARTHQUAKE, SECOND COMING OF JESUS CHRIST. Sometimes my entire existence is reduced to a hair on a spoon. A HAIR. ON A SPOON. Not unlike that time it was reduced to A FRENCH FRY. TOUCHING A PIECE OF CHICKEN. or COCO. LOOKING AT YOU. Your typical end of the world scenarios.

Speaking of That Awful Dog.

Last week you spent several days with my mother while your father and I took a trip to Canada, and when we returned you were happier to see us than you’ve ever been. My mother reports that you were nothing but polite and delightful the entire time we were gone, and you remained that way for, oh, an hour. Right up until we got into the car to go pick up the dogs. Maybe because you were exhausted from having to hold your shit together for so many days, or maybe because you really do hate Coco that much, but something switched and you cried and whined for over an hour while we navigated traffic, mostly about how Coco was going to eat your toys and you did not want Coco to eat your toys, but she was going to eat your toys AND IT WOULD MAKE YOU SAD! SAAADDDDDDD! I kept reassuring you that we would not let Coco eat your toys, but COCO! SHE WAS GOING TO EAT YOUR TOOOOOOOYYYYSS! And just when I started to get really annoyed, your whining became a little too familiar. You started to do something I tend to do when I’m feeling frustrated: what was initially the fear of Coco eating your toys turned into WE’RE ALL GOING TO DIE. You saw the connection perfectly, and I have to be honest. I could totally understand. Often for me the end result of not being able to open a jar of pickles is death by a swarm of diseased locusts.

You were inconsolable, and whenever I am in a similar state all I want your father to do is shut up and listen to me. His instinct is to fix it, and that’s not at all what I want. I don’t want him to open the jar of pickles. I want him to understand HOW FRUSTRATED I AM THAT I CANNOT DO IT MYSELF, and then he needs to let me enumerate on every other issue that THAT GODDAMN JAR OF PICKLES is bringing to the surface. Sometimes my instinct with you is to plug my ears, but I’m learning to take your frustrations much more seriously. Your fear of Coco eating your toys is significant in that it represents something larger, other fears, perhaps the perception that we don’t take Your Stuff seriously enough, or maybe you think she gets more attention than you do. Whatever the case, I stopped banging my head against the dashboard and really listened to what you were saying. As family we owe each other that. I let you wail about how you’d never be able to sleep again because Coco eating your stuff was making you too tired to sleep (I AM NOT EVEN KIDDING, YOU ACTUALLY SAID THAT), and then let you work through your emotions like I try to do, like your father always waits for me to do. And when we got home you stiffened your upper lip, took one stern look at that dog and said, “Don’t even think about it.” Leta, I am right there with you, sometimes the path to victory is paved with a lot of crying. I will be there offering tissues.