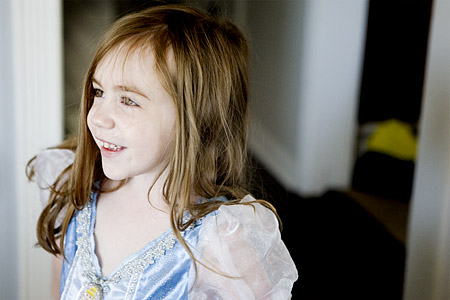 Last week you turned fifty-three months old. I should have written this then, but the actual day fell right in the middle of a series of major events, the most noteworthy one being that I finished my manuscript. Leta, pretty soon you’re going to learn that life is basically one final exam after one final exam, and in between each exam you’re busy writing term papers. Every time you finish one exam you’ve got about a day to celebrate before you have to start studying for the next one, and if you’re not careful your celebration may land you in the ER. In college I used to go back to my apartment on the last day of finals week, put a Pearl Jam CD into my stereo, and head bang to a song called “Alive” for three hours. And since I was a conservative, white Mormon I wasn’t very good at head banging and would always sprain my neck while trying to sling my hair around like Eddie Vedder.

The day after I finished my manuscript I didn’t listen to Pearl Jam, but I did have a couple glasses of wine. And then I tried to do a backflip on a trampoline. Why your almost thirty-three-year-old mother was anywhere near a trampoline is a question you will hear your father mumble under his breath for the rest of your life, but there I was, and then suddenly there I wasn’t. I can’t imagine what I must have looked like to the dozen or so people gathered for a barbecue, four gangly limbs shooting through the air, crashing with a thud on the ground three feet below. Luckily I landed flat on my back and was able to stand up and walk, but then I had to endure days of family of friends going, you did what? I did learn that if you ever have to go to the ER you should try to time your injury before dark on the fourth of July. You’ll get right in and have the full attention of the staff because it’s early enough that your shirtless neighbor Wade hasn’t started setting off bottle rockets in his mailbox. Or in the crease of his butt.

The following day I was barely able to move, and more than once you walked over to my lifeless body on the couch and pressed your hand to my head. You offered me your blanket, tucked it up under my chin and said that you hoped I would feel better, all in imitation of what I do and say to you when you aren’t feeling well. I notice you doing this a lot, mimicking how we act in certain situations or repeating phrases we often use. One morning I walked into your room when it was time to get up, told you good morning and then headed to your window to open your shades. You sat straight up in bed and said, “Do you have something to say to me?” Now, that is something you say to your husband when he comes home late smelling of someone else’s perfume, and since I didn’t remember participating in anything so scandalous I just shook my head and continued going about the morning ritual. But you were adamant and repeated that question emphatically several times until you’d had enough and screamed DID YOU SLEEP OKAY! DID YOU SLEEP OKAY! DID YOU SLEEEEEEEEEP OKAAAAAAAAAY! And then your face fell off. That’s something I usually say to you right after I say good morning, and here I was deviating from the script. So I paused, asked you if you had slept okay, and you picked your face up off the floor, attached it to your head and said, “Why, yes, thank you very much.”

This month your relationship with Coco had improved slightly, enough that you now tolerate her. In fact, sometimes you even engage with her, albeit usually when you’re trying to stave off bed time. One night a few weeks ago you were coming up with every excuse to stay up late and got so desperate that you started encouraging Coco to chase and lick you. That dog had been waiting almost seven months for such an opportunity, and the fact that you paid her even the tiniest bit of attention almost sent her into cardiac arrest. Your father and I just stood back and let it happen, and within a couple of minutes she had licked you to the point that it looked like you had been doused with a bucket of water. Other times your interaction with her is more of an older sibling who is looking for any possible way to get the younger sibling in trouble, and if you hear either of us groan or grit our teeth you come running and say, “WHAT DID COCO EAT NOW?” That is your immediate assumption if it appears anything is wrong, and it is your hope that we will threaten to throw all her Polly Pockets away.

Earlier this month we took a vacation to Florida, and the trip there was the longest day of traveling we’ve ever attempted with you. Surprisingly you held up quite well through both plane rides and the two-hour-drive to our condo, and the only time we thought you were going lose it was on the descent of the second flight into Mobile, Alabama. The pressure in the cabin started messing with your ears and at one point you started yelling, “I DON’T HAVE A VOICE!” Which I thought was a pretty hysterical description of that sensation, but you did not find it funny at all and continued to lament your muteness, vocally, going on and on about how your voice was all gone and gone forever. It was kind of like how you tell the Sleeping Beauty story, how you like to say that she pricked her finger and then died and died and died, and she was dead a long time. And then she was dead. From dying.

We spent seven days in Florida, and although we tried to get you to enjoy the beach you would not put your feet down and touch the sand. So you spent the majority of the time in the pool. It was a little sad not to have created a few memories of us together on the beach building castles or dipping our toes in the ocean, but if there is one unassailable truth that we keep butting up against as your parents it’s that you will try something new only when you are good and ready. This has been true of every milestone in your short four years here, from sitting up to crawling to walking, from eating and sleeping to meeting new people. Everything is and has been a battle, and the more we try to force something the more you resist. Our instinct as parents is to panic and try to fix the problem when in reality there is no problem. You are just taking your time. And really, all you want from us is to give you that time.

On the last night of our vacation we were out getting dinner at a restaurant on the beach when suddenly I looked up and saw you running after the two kids who had been with us all week. On the beach. In the sand. WITHOUT SHOES. All of us just sat there in silence and stared. I know it sounds weird to say that I was proud of you for walking on the beach, but there it is, I WAS SO PROUD. That moment was just a continuation of so many other moments when you were saying to us, hey, everything is fine, I’m just deciding for myself when I’m ready. And right now I’m ready.