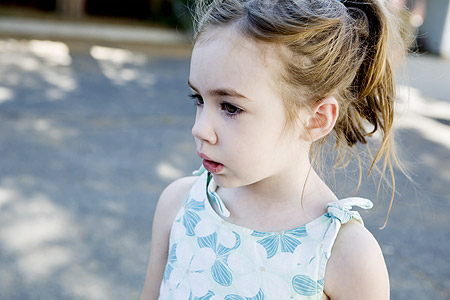 Last week you turned fifty-five months old. Yes, yet again, I’m late writing this, and I know you’re tired of the excuses. You’re going, seriously? AGAIN? Yet another piece of evidence that I don’t love you. That I never loved you. And that’s a big bucket of evidence, isn’t it? Filled to overflowing with all those times I wouldn’t let you wear that Cinderella costume to school or eat that bowl of M&M’s for breakfast. AWFUL AWFUL AWFUL. Leta, if there were any evidence that I did not love you it would be that one time you were in the room and I refused to turn off the TV when “Rock of Love” came on. And really, all that shows is how much I hate myself.

So the summer is almost over — GAH, WHY AM I REMINDING MYSELF — and there is now one more reason to dread the winter to add to all the other obvious ones (like, um… WE’RE ALL GOING TO DIE): I don’t know if I’m ever going to be able to convince you to wear pants again. You haven’t worn a pair of pants in over three months because of all your summer dresses, and believe me, I think it should be legal to walk around without pants on, I would sign that petition and vote for the person who would pass that legislation, but sometimes it’s just not practical. Take for instance, when it’s 12 degrees outside. And lucky for us we live in a place where the average temperature in the winter is about 100 degrees below that. I AM NOT EVEN KIDDING. I’m exaggerating, but that’s different. Luckily I cannot be arrested for either because if I could you’d be coming to see me once a month in a maximum security prison.

Last week my half of the family wanted to get together at a local park to celebrate Labor Day, and I made the huge mistake of telling you about it without first checking to make sure that nothing was going to disrupt those plans. I mean, usually I do my research, and before I tell you about an exciting upcoming activity I make sure there are no asteroids headed toward Earth, because SO WHAT half the continent erupted in flames, you wanted to go to Grandmommy’s house.

So I told you about the park and that’s all you talked about for two days, and then that Monday morning it was pouring down rain and the temperature had dropped almost thirty degrees. Plans changed and now we were going to meet at Papaw’s house, and when I told you about that minor adjustment, explained the change in weather, you went NUTSO, exactly as I knew you would, all BUT I WANTED TO GO TO THE PAAAAARRRRK! And I was all, really? I never would have guessed that. And you’re all BUT WE CAN PUT ON A JACKET AND GO TO THE PAAAAARRRRK! So I said, look, we can go to the park, but you’re going to have to put on pants. You blinked very rapidly for about ten seconds, in silence, and then said, “I think we better go to Papaw’s.”

HA! SEE? I AM A GENIUS! At that moment in my head I was dancing around, giving myself a high-five and mooning you.

In a similar vein, your father offhandedly mentioned Halloween to you about two weeks ago, and guess what every conversation since then has been about? I could wring his neck for doing that, because had he checked for asteroids before bringing that up? NO HE HADN’T. And every morning you ask us if today is Halloween. No. Is it soon? Not really. Is it in a few minutes? Not at all. But you want it to be today! Soon! IN A FEW MINUTES! RIIIIGHT NOOOOOWWW! And when that starts up I tell you to go take that up with your father, he’s the one who started this mess, and while you’re at it, could you please tell him that he’s been in there for over forty-five minutes, can he even feel his legs anymore?

Also, does a copy of MacWorld even last forty-five minutes? Some people run marathons faster than your father uses the toilet.

So last week was a bit of a strange week, and weird things were happening all over the place, some things that I won’t even be able to talk to you about for another twenty years, and during all that mess I wrote something on my website that was misunderstood by a lot of people, people who feel like I was calling them names and making the gap wider instead of trying to bridge it. Why am I bringing this up here? Because it’s important for you to know that I don’t want to be that person. And I want you and them to know that that was not my intention.

My website has taught me so many things, chief among them to be more compassionate to everyone who crosses paths with me. And I have learned about that compassion from being beaten in the head with some of the really stupid things I have done here, and also by the horrible way people have talked about and treated me publicly. Do I think that what I wrote last week was stupid? No. Emotional? Absolutely. And I think it was through that emotion that I hurt some people when what I thought I was doing was stirring them up. I did not intend for that to happen, but it did. And while I’m happy I stood up for what I really believe in, I feel terrible that so many people felt like they were being slapped across the face.

Because I know exactly how that feels. And I hate that I contributed to someone feeling that way. Does this mean I’m sorry for what I wrote? Not exactly. Every one of those words came straight from my gut, and I still feel so passionately about it now that I’m afraid to turn on the television lest I throw a rock at it. But I am sorry that the way I wrote it was taken as an insult to so many people, and I know I could have been more compassionate when stringing together my thoughts. Because compassion is the only way that most of the things that are wrong in this world are going to get better. And Leta, they must get better. For you, for every other child alive right now. Your parents and so many others have a lot of things to fix and to answer for. And I’m willing to stand up right now and go, you know what? I could have done it better. I’m sorry I didn’t, but I’m willing to try harder next time.