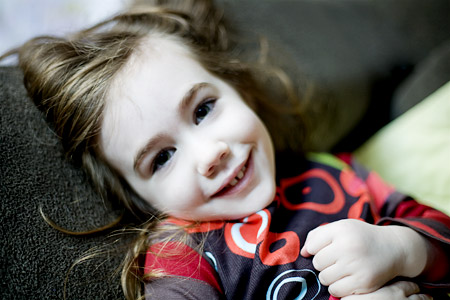 Last week you turned fifty-eight months old, and this may just be the latest I have ever been in getting around to writing your newsletter. But! I have excuses! Each one of them wrapped neatly in stomach acid and topped with a bow of mucus! What, you don’t like those? Then how about a box filled with a terminal case of heartburn, lovingly lined with burps that smell like ginger ale? No? This has been working on your father, he leans in for a kiss only to be greeted with a cloud of barf breath, and every time he recoils in horror I’m quick to remind him that it was his penis that did this to me. What is a penis, you ask? Don’t worry, we’ll have that conversation. When you’re thirty.

Earlier this month we spent several days with your father’s side of the family at a cabin in Northern Utah for Thanksgiving, and it marked the first time we’ve ever taken a vacation where you were not totally freaked out about the change. In fact, the change energized you, and for three straight days you played with your nine-year-old cousin, occasionally coming downstairs to announce that you loved it there and were never leaving. You loved it so much, in fact, that you barely noticed the large number of strange people coming and going. You even interacted with people you had never met before, STRANGERS, something I didn’t expect to happen for several decades, perhaps not until your own kids forced you into a convalescent home and a new nurse showed up to clean out your colostomy bag.

The night before we left when I tried to prepare you for the fact that we were leaving the next morning, you started bawling into your bowl of Cinnamon Toast Crunch, something you had eaten at every single meal. So I tried to cheer you up by mentioning the fact that we were driving to Granmommy’s house the next day, and your countenance changed immediately. You asked if we were staying there “for a lot of nights,” and jokingly I threatened to leave you there forever. “FOREVER?” you asked, and just as I was about to assure you that I was only kidding you dropped your spoon, wiggled your fingers in the air and shouted, “I WOULD LOVE TO STAY THERE FOREVER!”

The past month has been dominated with the idea of the new baby, and in trying to describe the timeline of events your father momentarily lost his brain and told you that the baby would be here when the snow melted. Such an explanation would hold up if this winter were exactly like the last one when we didn’t see actual patches of grass until May, but already we’ve had snow come and go, and that baby isn’t here yet. So when your father picked you up from school today your first question was, “Is Mom’s baby out?” And when he answered no you were quick to point out that the snow had melted. So here, since your father isn’t the one throwing up twice a day and will never know what it’s like to feel his thighs unhinge and move in opposite directions, let me clear it up for you: ETERNITY. THAT’S HOW LONG THE BABY WILL BE IN MY TUMMY.

Several times in the last few weeks you have pointed toward your own full stomach and announced that you’re having a girl, an excruciatingly adorable habit that turned sour once you started pointing to overweight people in public and wondering out loud about the sex of their babies. You know, I’m sure it’s a lot of fun to have a one or two or three-year-old running around when you’re pregnant, if you’re the type of person who enjoys pain and routinely drops fifteen-pound dumbbells on her toes for the adrenaline rush, but I have to say that going through this experience with you as a four-year-old could not possibly be more enjoyable. I love your curiosity and concern, your anticipation, how you repeatedly assure me that when the baby gets here you will totally share your nachos with her. And I refer to the baby as “her” because you will not even consider the alternative, and there are times when I bring up the possibility and you will hold up your hand to silence me, as if I’m talking about something as appalling as genocide or anal fissures.

Mostly, I am excited that this baby will have you as an older sister, and not just because you will both need someone to call to complain about the fact that your parents are nuts. Sure, there will be times when you’ll both try to kill each other either through physical brutality or embarrassment, but I know that at some point this baby is going to look up to you and think you are the coolest thing that ever walked on the planet. And while there is no way to predict the lasting dynamic of a relationship between siblings, I can only hope that you will have with this one what I have with my own, a bond so strong that it doesn’t even matter that we have nothing but our parents in common. They are lifelines, people who were there, who were witnesses to everything that made me who I am, and I am the same for them in return. Is the relationship perfect? No, but we all know that we would sacrifice anything for each other, and one of the many reasons we decided to have another child was to give you the possibility of that friendship.