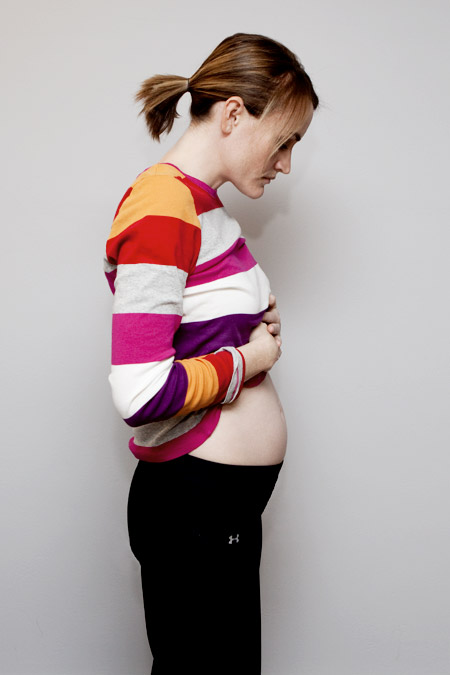 I am as large at 14 weeks this pregnancy as I was at five months with Leta. It probably doesn’t help that we took this shot not twenty minutes after I had eaten an entire plate of classic nachos at Chili’s. I’ve been craving beans and cheese, and conveniently Leta has wanted to have nachos for dinner every single night for the last fifteen days. We have a quick recipe for making them at home, and more than once Jon has given me a desperate look, like he might keel over and die if he has to eat nachos one more time. Internet, isn’t he brave? To suggest to his pregnant wife that he is allowed to have an opinion about food whatsoever?

I was hopeful that the nausea would subside at the beginning of last week like it did when I was pregnant with Leta, but no such luck. It doesn’t last all day long like it did for the first three months, but every night at about 7:30 PM that queasy feeling starts to settle in and I want to die. I remember succumbing to this hopeless feeling last time, thinking that I would never again feel normal or healthy. And there have been so many nights in the last couple of weeks when I have believed that I would feel sick like this forever. Jon has tried to comfort me, but the thought of anyone touching me or getting close enough to breathe on me is enough to turn me into a homicidal maniac, and I assure him that he shouldn’t take it personally. If Brad Pitt were to reach over and caress my face I’d whip around and bite off his arm at the elbow.

Note to partners who are feeling neglected: PREGNANCY IS BLIND TO CUTE AND SEXY.