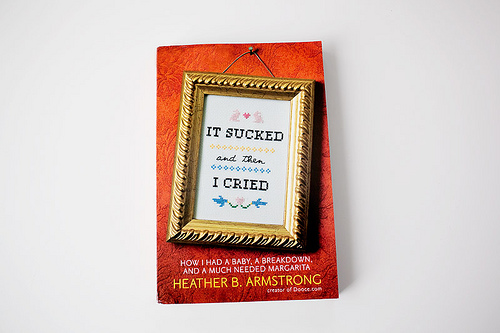 This is the memoir I wrote about my pregnancy with Leta and the subsequent postpartum depression that landed me in the hospital, all wrapped up and tied together in a handy little book that you can take with you to the toilet. Your grandpa is going to love it.

It comes out on March 24th, but you can pre-order it at Amazon

. Jon and I designed and photographed the cover together using a framed cross stitch lovingly executed by Julie Jackson of Subversive Cross Stitch and Kitty Wigs fame. My personal opinion is that the only way the book could have turned out any better was if it came with a free sample of Prozac, a week’s worth of babysitting, and a back rub from Clive Owen who would be required to administer it while nude. Only.

Also, I’m going on a book reading and signing tour, and since I will be over six months pregnant at the time you know it’s going to be one big party. Me and my swollen ankles back at the hotel swigging prune juice and channel surfing, hoping the local CBS affiliate is airing an episode of 48 Hours Mystery that I haven’t seen already.

I will have much more to say about the book and the experience I had writing it as the release date draws near, but in the meantime I wanted to publish the dates and venues for the book tour so that anyone who needs time to plan has some. A bit of fair warning, though: I take no responsibility for any emotional damage caused by the sight of my bloated face. I say that because I met one of my dear friends when I was six months pregnant with Leta, a friend who had no idea what I looked like when I was not pregnant, and when I saw her for the first time after giving birth she fell over, got back up and said, “Um, your face isn’t fat! How did you do that?!” How? HOW? I survived the brutal initiation ritual into motherhood otherwise known as CROWNING and EPISIOTOMY. AND THAT WAS ONLY THE BEGINNING. She didn’t have to take birth control for years.