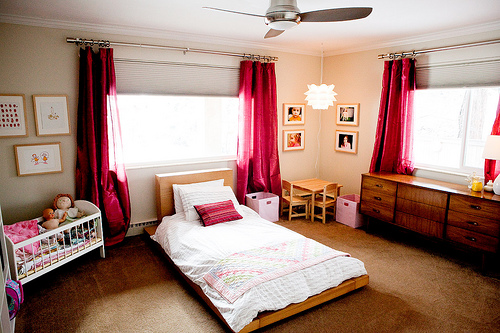 Last week I channeled my nesting instincts into organizing Leta’s room, a task I very much looked forward to after spending two weeks knee-deep in files and old CDs we’d yanked out of the office closets. That would have been a much more enjoyable project had any of the crap we’d been storing inspired any nostalgia, but all that space was filled with random papers like heating bills from 2005 and a Home Depot receipt for a switch plate, papers we should have thrown away long ago but didn’t under the ridiculous suspicion that maybe one day they’d be needed in an emergency. Because you just know that the day you toss that program to your cousin’s 1991 high school graduation some scientist is going to discover that the cure to cancer was written on page two, right after the lyrics to the alma mater, and if only someone in the world had saved a copy! See! Pack rats aren’t crazy, we just want to save the world!

Although I did stumble upon a box of mementos from the jobs I worked in Los Angeles, and tucked inside an envelope full of indecipherable meeting notes was the headshot of one of my actor boyfriends, the one whose apartment was across the hall from my own. The one who, after Jon and I had been engaged for several months, rang our doorbell at 2 AM because he was scared he had overdosed on cocaine and espresso. This has long been a bone of contention in my marriage to Jon, the fact that I invited this ex-boyfriend in and let him sleep on our couch, because I don’t know, HE COULD HAVE DIED or worse, he would have done a thoroughly convincing imitation of Ty Pennington.

And sometimes if Jon is trying to explain to someone why his wife said or did something crazy he’ll stop mid-sentence, wave his hand and go, “Let’s put it this way: this is a woman who once let her high ex-boyfriend sleep on her couch.” Men who hear this invariably shake their heads and go, “Duuuuuuude.” Women, however, will shrug, wait for the rest of the sentence and ask, “Your point is?”

Anyway, the office is finally clean, except for the menacing stack of old computers that we need to run to a recycling site. They are all currently sitting in the middle of the living room floor as a constant reminder to GET IT DONE, and when I use the pronoun “they” I am being purposefully misleading. I don’t think a pronoun exists in any language to quantify the number of outdated computers we’ve had stored in our office. “A ridiculous amount” is too humble. “Embarrassingly dumb” doesn’t even begin to include the number of PCs from 1998 alone. We still have the computer I was using when we first started dating, and I made sure that Jon erased the hard drive so that years from now some alien doesn’t go digging through some scrap yard, find the transcripts to our first Instant Message conversations and make the sweeping conclusion that humans were totally gross.

Organizing Leta’s room was an easier task by far because it was just a matter of thinning out her collection of princess crap. The tricky part was deciding which princess crap to get rid of, and that was a matter of weighing potential freak outs, therapy sessions, or death from abject sorrow. So while she was at school we combed through all the stuff and asked ourselves, “Will she even remember she had this?” But then we’d promptly disregard the answer and get rid of it anyway. The following day when she was looking for a particular princess book to read I held my breath and braced for the windows to crack against the waves of her inevitable fury. But instead of screaming about how she couldn’t find the book she wanted, she squealed at the discovery of all these other books that had been hidden under a stack of crap, books she’d totally forgotten about! HA! SUCKER! That’s a little trick I like to call LIMITATIONS OF A FIVE-YEAR-OLD BRAIN.

Here are a few pictures of her finished room: That platform bed is something we bought a couple of years ago to transition her out of a toddler bed. It’s low enough to the ground to accommodate her violent sleeping habits, ones that usually send her head-first onto the floor. Bed linens are from Ikea except for the pink quilt at the foot of the bed. It was handmade by Jon’s mother. The white crib was a handmade gift from my step-father when I was 11 years old. The long, mid-century dresser was a find at a local antique store, and the white shelving unit is the Expedit from Ikea. Overhead fan is the Minka Concept I flush mount.

I give this room two days tops before it’s a complete disaster again.