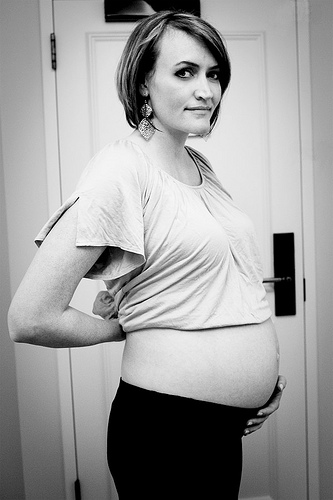 Last week marked my 30th week of pregnancy (tomorrow marks week 31), so I had Jon snap this photo last Wednesday night in Austin at our hotel room a few hours after the book signing: Friday morning I had an appointment with my OBGYN who made a point of telling me that she was much more pleased with this month’s weight gain, a surprisingly low three pounds, than with my weight gain throughout the rest of my pregnancy. THIS DOES NOT MAKE ANY SENSE. Internet, I have been eating room service and airplane peanuts for three straight weeks. Readers brought me doughnuts and rice krispie treats and enormous chocolate cupcakes, and I ate all of it. Plus, I slept like total crap. I’m surprised the scale did not start screaming when it saw me waddling down that hallway.

Whereas in the months before my book tour I was much more careful about the quality and quantity of food I put into my mouth and maintained a three-to-four day a week workout schedule, and every time they weighed me it was all ARMSTRONG, THAT’S ANOTHER TWELVE POUNDS. So she can sit there and wave her finger at me and tell me to lay off the potato chips, but come on! Those numbers don’t lie! I gained less weight by eating more sugar! That’s called science! It was my body’s way of saying HEY HEATHER! WE NEED MORE CUPCAKES!

I don’t know if I can find the words to describe just how happy I am to be home. Even though I came back to Utah on the weekends throughout the tour, those days were always filled with the chaos of laundry and administrative work that made it impossible to relax. I think Coco summed it up nicely last Friday morning after she had been home for about 18 hours from the kennel. We’d picked her up late Thursday afternoon, and she was understandably happy to see us, but it wasn’t until the next morning when we let her out of her crate and she realized she was still at home that she began what would end up being a thirty-minute crying jag. On and off the bed she jumped, and then back and forth between our room and Leta’s room she charged with the speed of a rocket, and the whole time this distressed, ear-piercing wheeze came out of her mouth, HAAAAYYEEEEEE HAAAAYYEEEEEE HAAAAYYEEEEEE, to express her disbelief. It’s like she was so filled with joy that the only way she could communicate the magnitude of it was to cry inconsolably. I knew exactly how she felt, minus the desire to walk into the bathroom and eat whatever was in the toilet.

Chuck sat silently at the foot of our bed watching the blur of her body whip between rooms. It looked like he was watching a tennis match. At one point Jon seized Coco and tried helplessly to calm her down, and Chuck just stared at him without an ounce of sympathy. I imagine that if I had just been forced to sleep with her inside a cage for six straight nights that I would have been feeling just like Chuck in that moment, like how much can you people take? No really, how much? Because all we need is a box and some tape, and we can send her back. Poke some holes in the top, she’ll be fine. I didn’t have a camera on me that morning, but I can confirm that Chuck was absolutely adorable sitting there plotting Coco’s mysterious disappearance.