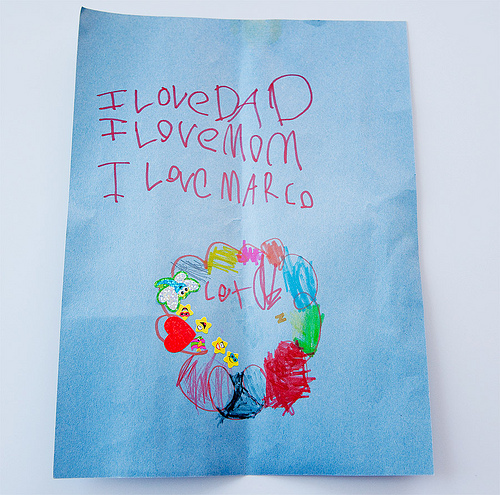 Last week Leta learned how to make get well cards at school, and so over the weekend she ran with that idea, holed herself up in her room and started her own printing press: I have to admit, yes, this is adorable and such a sweet gesture, but the first thing I thought is OH GOD. MARCO? Not only do we have to deal with the whole MARIO scenario, now people might mistake the L for a C?! Are we going to spend the rest of our lives going, no, in fact I did not name my daughter Marco, but I appreciate your concern. Now, let’s have a talk about your son, Kayedynne.

Sorry, that was mean. But if you live in Utah YOU TOTALLY UNDERSTAND, AM I RIGHT?

Anyway, we suggested that it might be a good idea to make cards for all the grandparents; for Grandmommy, for Grandpa Rob, for Grandpa Mike, for Grandma Nelta, for Grandma Della— and she was all, WAIT WAIT WAIT. That’s WAY too much, and she says, “How about I just do one for Linda and Rob?”

“Why just one for Linda and Rob?” I asked, learning for the first time that she knows my mother’s first name.

“Because I don’t want to have to do all that writing. I’d get SO tired.”

I told her we’d help her with all those other names, and as she handed me this card she leaned in close to my ear and whispered, “Guess what Linda does sometimes?”

Always eager for gossip on my mother I said, “Please tell me what Linda does sometimes!” I cannot wait until she is old enough that I can follow up that sentence with, “How about another martini!”

“Sometimes,” she said, “sometimes Linda calls Rob, ‘ROBERT’!!” And then she gasped as if she had just revealed that Grandmommy is actually a baby-killing liberal who hopes for a public option.

My eyes widened as far as they could go, and I was all NO SHE DOESN’T! And Leta was all OH HELL YES! Except without the HELL. It’s just, that was the expression on her face. And if she knew that I wouldn’t take away her Nintendo DS for saying it, she probably would have.

So I called my mother and said, dude, do I ever have the dirt on you.