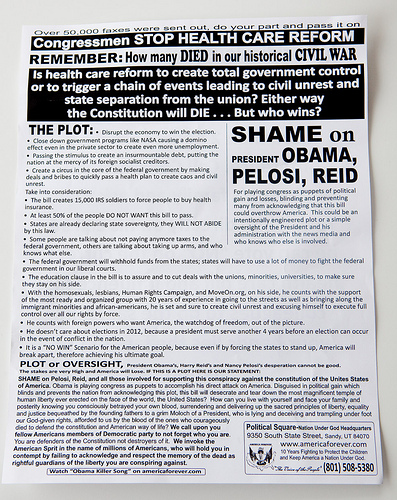 Yesterday was a nerve-wracking, twisting, twirling, everyone walking around with an accidental mohawk kind of a day in our house as we waited to see what would happen with health care reform. Now, before I go any further, this is not going to be a rant or an attempt to shove my liberal agenda down your throat. And if it were possible I’d pass out cookies and Tic Tacs at the end. And of course we’d bless them first and ask the Lord to make sure that everyone had a safe trip home.

Many of you I’m sure disagree with me when it comes to health care reform, and that’s fine. But I was really hoping that this bill would pass because it affects Leta directly and immediately (and Jon and me eventually). When we started this business five years ago we each had to apply for private insurance individually, and each of us was denied because of pre-existing conditions: Jon for hay fever, me for depression, and Leta because of a skull disfiguration at two-months of age that healed itself within a few months.

We applied to three different companies, and each company denied us. So we qualified for the state-run high risk pool. Which is basically catastrophic insurance. And it costs a fortune. But now Leta cannot be denied insurance for her “pre-existing condition” and no longer has to depend on the state-run plan. I heard a lot of talk about how this bill was going to socialize medicine, when in fact just the opposite is happening, at least in the case of my six-year-old daughter. We can now pay into the private sector for her health insurance. Boom.

Also, if Marlo gets sick, she can’t lose her insurance.

Is this bill perfect? No. Is it a start in the right direction? I personally think so. Do I expect to change anyone’s opinion? Of course not. But I thought it was important to show you that we are a living, breathing example of how this bill is changing things. For the better, I think. This is healthcare for my children.

I guess I wanted to put this example out there for a couple of reasons. One, I just had a friend call and ask if I could explain some of the minutia of the bill because she couldn’t make heads or tails of it. (For a more in depth look at what all this means you can read here, here, and here). And two, just when the stress of yesterday had reached such explosive proportions that the windows started to vibrate, I noticed a flyer tucked inside the handle of our front door. You are not going to believe what was printed inside: Here are some of the highlights:

“Is health care reform to create total government control or to trigger a chain of events leading to civil unrest and state separation from the union? Either way the Constitution will DIE… But who wins?”

“States are already declaring state sovereignty, they WILL NOT ABIDE by this law.”

“The education clause in the bill is to assure and to cut deals with the unions, minorities, universities, to make sure they stay on his side.”

“With the homosexuals, lesbians, Human Rights Campaign, and MoveOn.org on his side, he counts with the support of the most ready and organized group with 20 years of experience in going to the streets as well as bringing along the immigrant minorities and african-americans, he is set and sure to create civil unrest and excusing himself to execute full control over all our rights by force.”

YOU HAVE GOT TO BE KIDDING ME.

The whole point of the flyer was to get us to call Congressman Matheson to get him to vote NO on the bill, even though he declared more than two days earlier that he was planning on a NO vote. Personally, I’m sad that he cannot ever claim to be a part of this historical moment.

Forget tornados and leprechauns and spiders, that is some of the scariest shit I’ve ever read. I know people hate it when I get all political, but I had to bring this up at least to say WHAT?!?!? Do some people really believe this?!