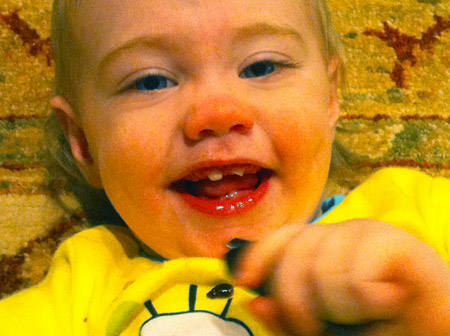 Let’s start this off by reminding everyone that the woman who sold us this house used to let a bobcat sleep in the shed. A bobcat who seemed nice because it purred. She told us this after she had walked us through the house to “explain” a few things. Only, later we found out that all those explanations were lies. So we started to think that maybe it was a mythical bobcat. Which, hey. That’s kind of awesome. We bought a house with its own mythical bobcat. What can your house do?

And then the first few nights we slept here we heard critters in the ceiling above our bedroom. No problem! Call the critter catchers! People so enthusiastic about their jobs that if they don’t come out of a crawl space without a few scratches in the face and a missing earlobe, they consider it a wasted day.

Now, they couldn’t assure us that it wasn’t a possum or raccoon or WHATNOT, but they were pretty certain there were just a whole bunch of birds nesting in the soffit of our roof. Those birds now have homes elsewhere, except… we’re still hearing noises here and there. Nothing like before, but enough that we think maybe the critter catcher wanted to screw with us and left behind a few tenants. And if that were the case, how do you get back at a critter catcher? It’s not like you could break into their house and let loose a bucket of snakes. They’d wake up and be all, CHRISTMAS!

So. Fast forward to Monday, my birthday. Things were normal until Marlo disappeared from sight for less than ten seconds. We didn’t even hear the usual thud, but once she started crying I came to her rescue only to find that she had somehow chipped off half of one of her four teeth. HALF. That tooth is now so sharp we’re afraid she’s going to slice her lip open. Or, worse, since she’s taken to head-butting her sister when she doesn’t get her way, use that tooth to commit felony homicide.

Please someone assure me that this has happened to their infant and that the solution doesn’t involve the use of a tool you’d buy at a hardware store.

Then my father called and said he wanted to stop by and drop off a birthday present, which is awesome except that he was driving all the way over from his house. His house that is located so far to the west that he has to be careful backing out of his driveway so that the car doesn’t fall off the edge of the earth.

So I took that time to write a little bit of a letter to myself to commemorate my birthday. And about a couple paragraphs in I knew I wanted to include one of my baby pictures in the post. I keep all of my baby pictures in a black scrapbook with acid-free paper (so very Mormon of me, I know!) that I remembered setting aside before the move. But no amount of hunting or turning over boxes could locate it. I hunted through the entire office, off into the basement where all the boxes that haven’t been unpacked are sitting like lonely little prisoners who violated probation by leaving the country and partying in Cannes and… oops. Wrong prisoner.

In the back of my mind I knew my dad was on his way over, so I ran up to the office to see if maybe Jon had shoved some of my stuff into one of the closets up there. Two of the closets are finished and have walls and floors, but the other four open up into the attic crawl space and are filled with air conditioning duct work and insulation. I hadn’t checked any of those closets yet, so I moved some boxes out of the way, flung open the door to the closet at the far south of the house, and standing not a foot away from my face was a very large, very hairy animal with giant shining eyes.

Okay. What would you have done in this situation?

That’s what I thought.

The whole time thinking OH MY GOD I FOUND THE MYTHICAL BOBCAT.

I ran into the kitchen still screaming AAAAAHHHHHHH-HHHHHHHHH-HHHHHHHH! And Jon is all, dude, are the kids okay? And I was like, THE KIDS? Are you kidding? The mythical bobcat could have jumped out of that closet and clawed my face off! I’m lucky to be alive!

It took several minutes for him to calm me down enough to talk coherently:

What had I seen? I didn’t know, I didn’t get a very good look, but it was really hairy and looked like a cat! A big cat!

Was I sure it was a cat? I DIDN’T KNOW. I wasn’t going to spend the time inspecting the intruder only to have it jump out and tackle me to the ground! YOU GO LOOK.

But, Heather, you know how allergic I am to cats. I can’t go look. YOU DON’T LOVE ME.

At this point I saw Tyrant grab a broom, and I said, please! Please don’t hurt it if you find it! And he said, “Oh, don’t worry. I’m just going to give it a little shove.” And then he walked over to the stove and grabbed the butcher knife.

Jon and Tyrant both started laughing, and I was like SERIOUSLY. THERE IS A FOREIGN ANIMAL IN OUR HOUSE. So Jon straightened up a bit, ran to the basement and grabbed an old dog crate. Then he handed it to Tyrant and bid him good luck.

My father finally arrived, and I was a total mess. He and my stepmother sat in the living room while I paced the kitchen and tried to engage in conversation that had nothing to do with wild, fanged animals. Nearly impossible. How was your drive over, dad? Were you chased by any tigers?

A few minutes later Tyrant walked into the living room, broom in one hand, crate in the other.

“Heather,” he said gravely. “It’s a good thing you found this cat when you did. It’s skin and bones. I doubt it would have survived another day.” Wait a minute, it’s not a mythical bobcat? You mean a poor little cat has been stuck in our attic crawl space? Am I allowed to bawl uncontrollably on my 35th birthday without looking like I’m pining for my youth?

I called animal control immediately hoping they’d arrive before the poor thing collapsed from dehydration, and after they showed up Tyrant told me to spend some time with my father while he walked around the neighborhood to do some investigation. I did everything I could to focus on my father who had travelled light years to wish me a happy birthday, but all I could think was, how long had that cat been in the attic? How did it get in there? How could it have survived without food or water? Why can’t we all just get along and save the world?

I apologized to him for being so preoccupied. And he was like, Heather, do you not remember taking road trips years ago, and if you saw a dead animal by the side of the road everyone had to assure you that it was taking a nap? Because otherwise you’d cry for three days? You just started your thirty-fifth year of life by saving an animal. And it didn’t cost him any money. So, good day all around!

And now I’m going to cry just typing the end of this:

Tyrant got some information from a neighbor who was pretty sure that the cat was the pet of another neighbor. He found that woman’s phone number, called her, and said, I don’t know if you’re missing a cat, but— and she couldn’t talk she was crying so hard. Yes, she was missing a cat. In fact, the cat had been missing for four weeks. She’d gone around the neighborhood before we moved in asking everyone if they had seen him. And after four weeks, she’d given up hope. She was currently in Oregon, but she’d have a friend go and pick him up. His name is Diego.

She had never been on good terms with the previous owner of this house, and she’s certain that Diego was locked in that closet intentionally. I can’t let my mind go there.

If it hadn’t been my birthday, I never would have walked into that closet, never would have found Diego. Yesterday the owner flew in from Oregon to see him and thank us. And I was like, don’t thank me, thank my mom! She went into labor on July 19th, and that’s why I opened that door.

He’s going to be totally okay.

However, I’m still a little jumpy and afraid to open closets.