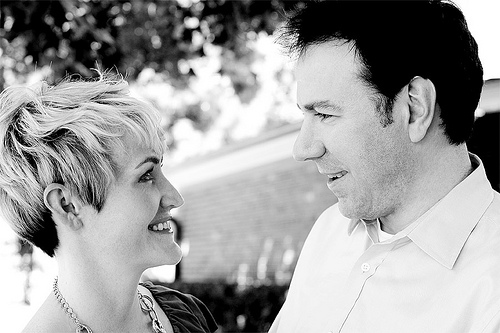 I figured this was an appropriate question given that Jon and I eloped on a cliff at Yosemite eight years ago this week, and that Monday morning we were sitting together on a couch across from our therapist. I like to compare her to a chiropractor: we see her when we need some adjustments. Except instead of popping a bone in my neck she just rolls her eyes and says, “I thought I told you to stop being so dumb.”

Jon and I see our therapist at least twice a year, more if there’s a lot of stress in our lives. Sometimes we can slip back into behaviors that we thought we’d overcome, but you know… low immune system, lack of sleep, etc, and next thing you know Jon is on the toilet with his iPad and I’m standing on the other side of the door, Marlo in a death grip around my neck, and I’m screaming THERE ARE NO LEISURELY POOPS IN PARENTHOOD, JON.

That’s one of the things I love about him most. Not the hour-long poops, no. GOD, NO. It’s his willingness to work on things, to take a look at himself and see his role in whatever is going on between us. He goes to therapy with me without dragging his feet or covering his ears with his hands. I feel very lucky to have found someone with this mentality, because I know some men would very quickly change the subject from “therapy” to “you’re acting like your mom, now excuse me while I openly scratch my junk.”

I love that he knows how to wear a pair of pants so that they hit his shoes at just the right angle: not too high, not too low. Trivial, perhaps, but I guess this speaks to his style. He’s got just enough. He knows how and when to look good, but not so that it would take him longer than I do to get ready. That may be old fashioned of me, or it could be that I dated quite a few closeted gay men in Los Angeles to know. You never want your man taking longer than you to get ready. Because if he does then odds are that he really wants it up the pooper.

And then third? I have to mention that he is an amazing father. He steps up. Sometimes (like many men I know) he has to be reminded to step up, but that’s usually because he knows I’m a control freak and doesn’t want to mess up whatever system I have in place. THAT was a fun therapy session:

Me: I need you to help more on the weekends.

Jon: I would, but last time I did you got mad at me for every little thing, like putting Marlo to bed so early!

Me: RIGHT! BECAUSE YOU DON’T KNOW HER SCHEDULE!

Jon: You mean the schedule you have written down only in your brain?

He’s particularly amazing with Leta and usually has an endless well of patience when it comes to her quirks. I’m much more like my father’s side of the family, the one that throws rocks at cars and approaches discipline as if we’re raising a military. He’s incredibly skilled at working through her brain to find out why she’s reacting a certain way when my knee-jerk reaction would be STOP ACTING THAT WAY. NOW GIVE ME FIFTY PUSH-UPS. ONE ARM.

I have a lot to learn from him. That’s a number four, I know, but it needs to be said.