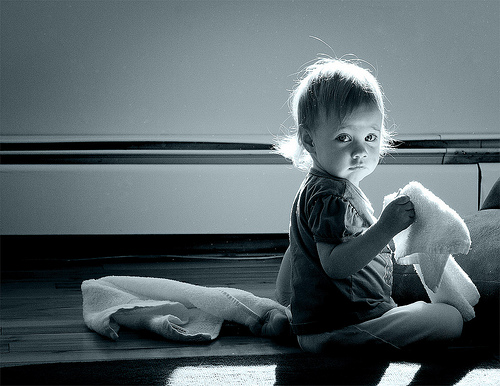 I’M ALIVE! ALIVE! I was doubtful that I was going to be able to say that yesterday afternoon after watching Marlo alone for four straight days, and then last night… oh god. I wouldn’t describe what I did as sobbing because that word doesn’t pack enough punch. Is there a level of crying that comes after sobbing? Howling? Waterfalling? Recreating that one scene in the bible where the bearded dude has to build the boat?

Wait. Didn’t every dude in the bible have a beard?

Marlo’s illness just got worse and worse over the weekend, to the point that this is what she was doing for hours and hours and hours (and hours, just so you get the point) (also, I don’t pick her up here because that’s the exact opposite of what she wants):

Yes, I know, it’s cruel of me to have recorded that for the sole purpose of sneaking into her room when she’s fifteen and playing it at 4:30 AM while I laugh maniacally. Because that’s what time she woke up on both Saturday and Sunday. I could have left her in her crib until a more civilized time, I suppose, but wouldn’t that have been cruel? Instead, I quietly tiptoed to her room, swung open the door and yelled BOO!

At one point I tried distracting her with some sharp tools in the mud room, and she stopped crying and became engaged enough in the danger that I was able to sit on the floor to browse the Internet on my phone. I saw her slip out of the room from the corner of my eye, and I let her wander into the living room knowing that we have removed anything potentially dangerous to a baby from every surface. No, seriously. Our living room looks like a prison cell. My mom walked in and was all, why is there a poster of Rita Hayworth on the wall?

Trust me, we hung it high enough so that Marlo couldn’t reach it, rip it off the wall and and roll it into a bat to beat Coco.

Suddenly, three silent minutes had passed, and as every parent of a mobile child knows silence is NEVER a good thing unless Benadryl is involved. So I ran into the living room to find her perched on the couch waiting for me, the TV remote in one hand, the cable remote in the other. And when she saw me she waved both remotes and snickered because she knew she was being evil.

That is some sick shit.

My child has cold sores all over her mouth, red bumps covering her face, a fever, AND RINGWORM. And still she has the energy to find something she knows she’s not supposed get into.

HOW HAVE YOU PARENTS OF BOYS BEEN DOING THIS?