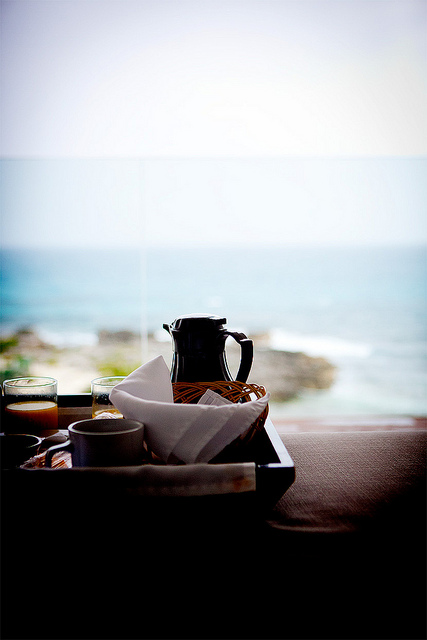 (I am writing this in bed, my back wrapped in an ice pack, my legs elevated so that I might stop screaming. Reality really missed us while we were gone.)

Several months ago our friends Kate and Dave asked if we’d like to join them on a trip to Mexico in January, that time of year in Utah when three-foot snowdrifts are covered in the black, grimy soot of traffic and polluted air. I immediately called my mother, asked if she’d be available to watch the kids while we were gone, and then double checked to make sure there wasn’t some arctic Mexico we didn’t know about. Like some little known Mexico, Alberta, which I’m sure would be totally charming, and the inhabitants exceedingly polite while asking if we’d like another round of caribou tacos, eh?

I’ve been to Mexico once while I lived in Los Angeles, but it was only for a day. And I don’t remember much because of all the homemade tequila. And because of all the work both Jon and I have been doing in the last month, the two weekends in a row we had to work to make sure all loose ends were tied up before we left, we failed to do any research that would have made the transition a bit easier. However, Tyrant did prepare a giant list of common questions we might have so that we could ask them in Spanish, including, “Where are all the good looking young men whom I might bring home to my assistant?”

We used that one all the time.

Tuesday evening we got off the plane in Cancun, and the humidity swarmed every inch of our bodies, including Jon’s hair which immediately stood on end, straight out from his head and remained there for the rest of the week.

He would have looked horribly frightened, except he was warm and smiling, so he just looked crazy.

I was indescribably giddy. Wide-eyed. Drunk on the thought of roads with no snow. And so after we breezed through customs and were about to make our way out to the van we had requisitioned, I must have looked like the gullible freak that I am. Because two men dressed in uniform stopped us, asked us who would be transporting us to our destination, and then one of them pulled us aside to give us the good news and the bad news.

You guys, I have watched way too much National Geographic and those shows where people try to smuggle drugs out of foreign countries and end up in prison where gangs man the hallways with Uzis.

Not that I was transporting any drugs, unless you count Prozac and that suitcase filled with Advil.

Turns out he was trying to sell us a timeshare (phew!), except Jon was becoming increasingly impatient (not phew!), and the mounting tension between the two of them had me imagining a future where both of us were trying to recover from gun shots to the chest.

I’m horrible with conflict, especially when the other person is becoming so agitated that he’s starting to speak in sentences that contain both Spanish and English.

Jon says that I’m exaggerating the situation, but he wasn’t INSIDE MY MIND. I really thought someone was going to get hurt, and it’s just as likely that it could have been the Mexican trying to sell us shit, because my husband was so frustrated that he started to talk to himself underneath his breath. That’s THREE DIFFERENT LANGUAGES BEING SPOKEN.

And the only thing I understood was, “Calm down!” AND THAT WASN’T COMING FROM ME.

Luckily we made it out to our van in the almost oppressive heat of the evening, except oppressive isn’t the right word. It’s like saying, “Clive Owen oppressively seduced me.”

From there we drove to Puerto Juarez where we caught a ferry to Isla Mujeres, a small island about eight miles off the coast of Cancun, away from the Outback Steakhouses and Burger Kings that have infested most of the tourist areas. In fact, that night we had fresh shrimp ceviche for dinner while sitting on the beach, a light breeze blowing in off of the ocean to remind us that we had made it to the first non-working vacation of our marriage.

I’m off to the chiropractor, so I have to stop here. But there are a few more stories to tell from this trip. Also, Leta turns seven years old tomorrow, and the preparations around that may be one of the reasons my back won’t let me stand up.

In the meantime, here is the first small sampling of the photos I took: