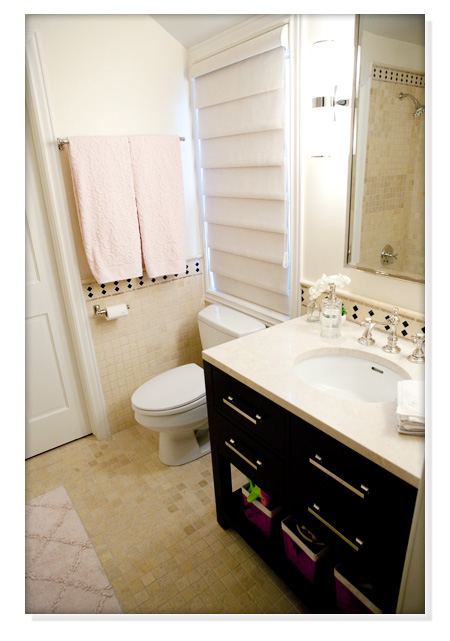 The final bathroom I want to share (at least until we get the master bathroom organized) is the jack and jill bathroom that Leta and Marlo share, the one between their individual rooms. I imagine that we will hear a constant stream of WHINE when the two are older and cannot believe that we are forcing them to share a bathroom. And when that time comes I’m going to remind her that we didn’t force her to dress like a polygamist while singing, “Ain’t gonna pee-pee my bed tonight!” on a stage in front of an audience.

Also, be glad we don’t have to go poo in a wooden shed that isn’t attached to the house.

Since Leta is a fiend for pink, I thought I’d bring in some but not so much that it would look like a princess exploded. You’ll notice that there is no shower curtain in here. Let me introduce you to my daughter, Baby Rambo. If we hung a shower curtain she’d rip it down and cut it into strips to wrap around her forehead to keep her hair out of her eyes as she flees the police and their dogs in the forest.

When Leta takes a shower she uses the one in our bathroom. Makes her feel special, and that’s one less household item we have to replace because Marlo had to go and turn it into a weapon. To hide all the blinding neon toys that accompany every child’s bathroom I found some pink storage bins to store them underneath the vanity. They’re waterproof, so we can just transfer the toys straight from the tub to the bins so that they can mildew and grow harmful bacteria. The accessories on the vanity are, in fact, quite delicate and would probably sound spectacular if thrown through a window, but Marlo can’t reach up there. So I actually got to get all pretty with it. Leta got upset when she noticed that the soap in her bathroom is colorless, and yet the soap in the powder room is pink. Why can’t she have pink soap, too? I don’t know, Leta. I certainly wouldn’t mind pulling a giant golden booger out of my nose, but sometimes life isn’t fair, am I right?