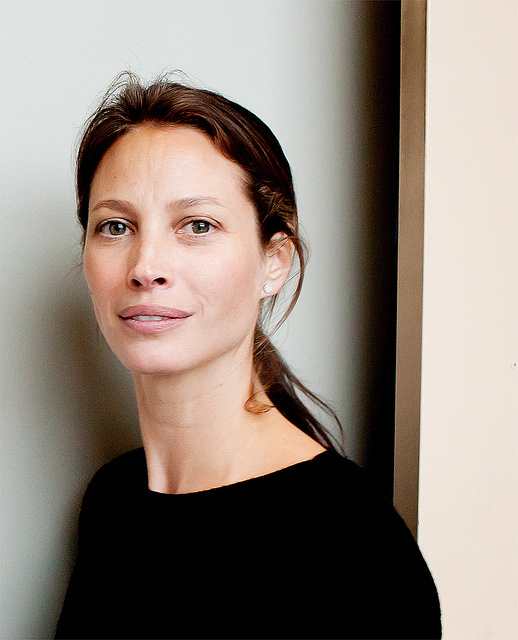 About a month ago Jon and I spent an afternoon at the Salt Lake City Public Library to catch the screening of the documentary No Woman, No Cry by Christy Turlington Burns.

Yes. The supermodel. This one: Yes, I got to meet a supermodel, one whose photos I had splashed all over my walls when I was in high school. And it was as surreal as you might expect because you really can’t capture her beauty in a photograph. She’s one of those people who walks into a room and you can actually feel time stopping. But this film, one about the challenges women around the world face in terms of prenatal and postnatal care, is really what I want to talk about. I think it reached inside me so profoundly because of all that I learned in the research I did leading up to Marlo’s birth, one I prepared to do without drugs. And I was fortunate enough to achieve that goal.

I had choices and options. Which doctor did I want to be there when I delivered my child? Which hospital? Which doula? What did I want playing on the stereo? I had Radiohead playing when Marlo entered the world, I had that ridiculous option, and yet so many women around the world are alone or ill-equipped or too poor to have adequate care when pregnant.

Women are routinely dying because of complications during pregnancy, and I got to choose which damn song I wanted to listen to. Hell yes, I’m giving this film every ounce of free publicity I can.

Christy really wants to solve this problem, and you can feel her soul in this film. After the delivery of her first child she hemorrhaged, and in many parts of the world such an occurrence is a death sentence. She wants to change this.

The movie features the stories of at-risk pregnant women in four parts of the world, including a remote Maasai tribe in Tanzania, a slum of Bangladesh, a post-abortion care ward in Guatemala, and a prenatal clinic in the United States. Here’s the trailer:

So. What can we do? Well, furious handwringing hasn’t ever worked. I’ve tried that many times and all I ever got was a callus.

First, you can visit Every Mother Counts where there are a ton of resources and information (here’s the Facebook page). Second, you can follow Christy on Twitter where she posts frequent updates. And finally, you can watch the film when it debuts on television: Oprah Winfrey Network, Saturday May 7th at 9:30 p.m. (ET/PT) the evening before Mother’s Day.

I’m going to host a viewing party with several of my close friends, and I encourage anyone interested in this issue to do so as well.

This is only the beginning for me as this is an issue I really want to get involved in and bring attention to. This is a problem that can be solved, and I’m going to help in whatever way I can to make that happen.