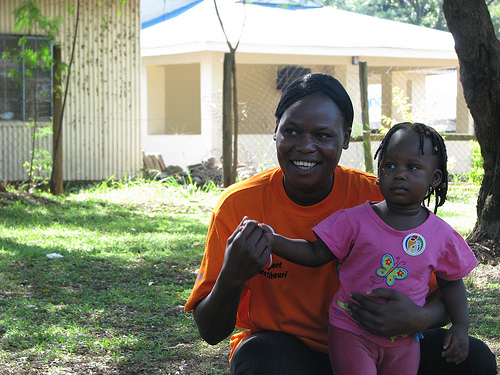 I don’t like to make a fuss about Mother’s Day in our house, but not because I’m a selfless angel. It means we don’t have to make a huge fuss about Father’s Day. See how that works?

We like to celebrate these days in small ways: naps, a vase of flowers, perhaps breakfast in bed. This year all I really want is a day free of snow. But since my husband and children can’t really guarantee that, I’ll just take an extra hour in bed. ALONE, JON.

I’ll call my mom and tell her how thankful I am for all the help she gives me, for how much she loves my children, for being a good sport when I tell her that Marlo saw an old woman with gray hair at the store the other day and shouted, “Granmommy!”

I’ll hug my own kids and feel grateful that they are healthy, and I’ll know that I am lucky that I had access to the means of bringing them into this world safely.

I also want to celebrate the women who are trying to make that a reality for every mother.

Today I want to use the platform I have here to feature the story of a mentor mother, a woman in Africa who has been trained by an organization called mothers2mothers to empower women in her community. This organization was founded with the idea that if you support a mother, you can change the world.

I want to introduce you to Jackline Odongo. Her story is both heartbreaking and hopeful, one that will go a long way in helping mothers who live with HIV/AIDS to live more fully and with less fear.

My name is Jackline Akinyi Odongo. I’m a single mother living positively with HIV/Aids. I stay in Kenya, Nyanza Province in Kisumu County and I have a story.

I stand before you as a mother who has passed through prevention of mother to child transmission of HIV, PMTCT successfully with a baby girl who is now 2 years old exactly.

I knew my HIV status 3 years ago when I attended the antenatal clinic. I underwent a pretest and a post test counseling. I was shocked to be told that I was HIV positive. I cried a lot and refused that the result was even mine.

I was then referred to the mothers2mothers program to be counseled more on my HIV status. In the counseling room, I was welcomed and was told that having HIV virus is not the end of living and that life had to continue. They gave me hope for living. I was taught on several issues like exclusive breast feeding, the importance of the CD4, disclosure, the ARV prophylactic drugs for me and for the baby and the importance of joining the support group.

I went back home to disclose my status to my husband because it was important for him to also know his status. To my amazement, I was beaten thoroughly by my husband and even thrown out of my matrimonial home. He shouted and threw my clothes all over; he made sure that everyone in the homestead knew why he was chasing me away. Before that, I was so loved and cared for by my in-laws including my mother in law, but this day nobody even tried to defend me, I was abused and called all sorts of names and everyone thought that I was an outcast who had brought death to that homestead. My husband later married another woman and I’ve never gone back to that homestead.

That was the longest day in my life, I didn’t know what to do or where to go being that I was an orphan. I thought of killing myself or even get rid of the baby. It was also the month that I had just lost my job, tested positive and now thrown out of my home.

I went and took refuge in a friend’s house. I was still bitter but forced myself to disclose my status to her. She welcomed and consoled me.

After one week of thinking, I went back to the heath facility to join the mothers to mothers support group. When I entered the room where the meeting was being held, to my surprise, I saw very healthy women, pregnant and breastfeeding mothers who had babies below the age of two. The women were bright with healthy babies unlike what I expected, to see very sick women with rushes all over.

Then the introduction started and they each stood up and said their names and all were HIV positive. That is the day I said that I was not going to infect my baby and that I was going to follow the doctors instructions and keep all the appointments. I started living positively.

I gave birth in a health facility normally, was given all the ARV prophylactic drugs. My baby girl was very healthy, weighing 4.3 Kgs birth weight and the nurse who was attending to me was so happy with the baby. I named her Aki Amor, in my language it means that am so happy (it means joy, happiness and love). I breast fed my baby exclusively for the first six months. She was very health and fat. I kept my appointments and with the mothers2mothers support group, I was staunch member and everyone knew me and my baby because she had a unique name. At six weeks, the baby was tested by PCR and the results were HIV negative. At six months she was again tested and it was HIV negative.

When my baby was six months I saw an advert that the mothers to mothers were looking for peer educators to work as mentor mothers, I applied and was successful and was taken through a two week training course on PMTCT (prevention of mother to child transmission of HIV) and HIV/AIDS basics.

I started working as a mentor mother helping HIV positive women like me to accept their status and live positively. I disclosed my status to those women who are in denial, convincing them that they could be healthy like me and have HIV negative babies if they followed the doctors’ instructions. The women believed in the mentor mothers because they were living examples.

During this period, my baby was still on care and I could bring my baby to the support group as an example to see how breast milk is the best food for babies and to show how healthy she was being that she was born of an HIV positive mother.

My baby was tested again at nine months and the final test at 18 months was done last year September – it proved that she was HIV negative. The baby has been weaned off from the program and she’s still doing well.

I believe my story will help women who are still in denial and also help reduce stigma.

Much love to you, Jackline. You are a hero.