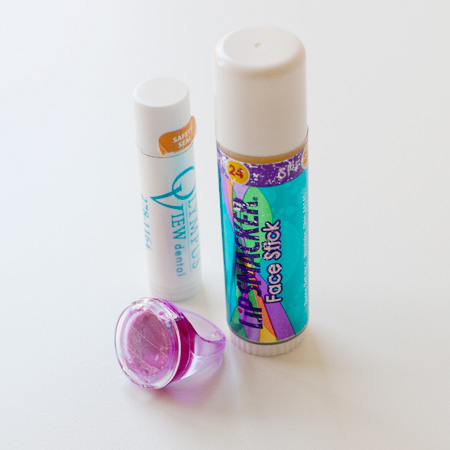 Tuesday morning Leta could barely wait to give me my birthday present. I think she may have even been so excited about it that the thought of it woke her up early. Fortunately, seven-year-olds can occupy themselves that early in the morning. They can also dress themselves, brush their own teeth, and pour themselves a drink of water. Parents of toddlers: YOUR FUTURE IS AWESOME.

Parents of teenagers: KEEP ME IN THE DARK.

She wanted to wait until Jon was in the room to hand me the present, but he was taking too long to get ready and she couldn’t take it anymore. It was, ahem, “creeping her out.”

“Stand there, and I’ll be right back,” she said, and then she ran upstairs to her room. I heard some scuffling, hoped it wasn’t a raccoon, and followed her instructions. When she returned her hands were behind her back, and when she slowly moved her arms to her front I saw that in each hand she was holding a pink sock. Her pink socks. I don’t know who told her that I wanted a pair of her pink socks for my birthday BUT OBVIOUSLY SOMEONE DID.

“You got me some of your socks!” I said, trying to act as stunned as possible.

“No, silly! The present is IN the socks,” she explained.

I took the sock from her left hand, reached inside it and pulled out a stick of sunscreen that you rub on your face. A stick of sunscreen we’ve had in the junk drawer for about a year. In the other sock I found a tube of lip balm we brought home from the dentist several months ago and a ring I bought her from the dollar section at the grocery store. She wanted me to know that she really wanted me to have that ring, even though it was hers. I had a really hard time holding back the tears.

That night before Jon and I headed out to a celebratory dinner he pulled out the present he had bought me, a huge three-by-two foot jewelry stand. All my jewelry is sitting in a giant pile on the floor in the middle of our closet. You guys! He’s paying attention! Or at least giving me a huge hint!

Leta watched as I opened it, and immediately her expression turned sour. I asked her what was wrong, and it took several minutes for her to compose herself enough to say, “I’m sorry my present isn’t as good.”

I knelt down so that my face was at her height, hugged her as hard as I could without crushing her and said, “I absolutely love the presents you gave me. In fact, I’m going to wear your ring to dinner tonight with this fancy outfit I’m wearing!”

Fancy meaning I had taken a shower and was wearing clean clothes, of course.

She perked up, nodded and said, “You could wear the lip balm, too!”

“I will!” I said, and then I watched her skip into the other room.

Parents of toddlers: YOUR FUTURE IS AWESOME.