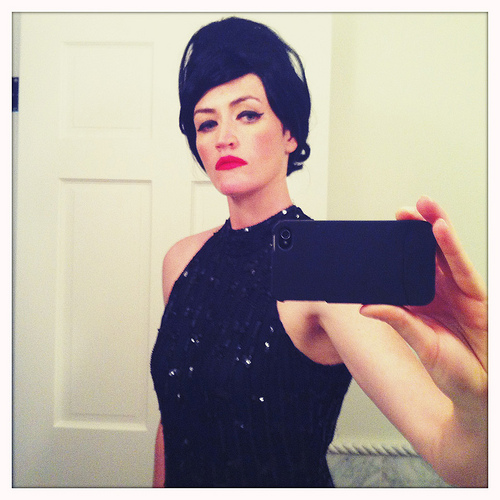 I wanted to post the video yesterday of our roof so that it could simmer before I gave you the whole story, and there is indeed a story, what website did you think you were reading? At the end of winter… no. Scratch that. Winter didn’t end until the middle of summer SO THAT’S JUST CONFUSING. Was it March? April? One of those months when I see pictures of friends in other states walking around in short sleeve shirts while I’m wearing four layers of flannel at my desk sitting in front of one of those light machines that’s supposed to take the edge off of homicidal tendencies.

(Those lights work. I haven’t killed anyone. Yet.)

We had found pieces of the roof in our yard after every snow storm last season, but one morning when Coco brought us a giant chunk of it in her mouth so that we could play fetch we realized, huh. By next winter that chunk could be insulation. Maybe we should let that happen in case the 25-year-old chemicals counteract her personality. Coco! HERE! THIS IS CALLED ASBESTOS.

Next thing you know Jon’s called five different companies to come out and give us a bid. The man was obsessed, and I guess I can understand? Maybe? Yes, it is literally the roof over our heads, except that I think our kids would benefit way more from new carrara marble countertops in the kitchen.

But then those bids started to come in. And the first thing I did was fall over.

When you added in the cost of shingles, demolition and removal of the old roof, rain gutters, snow melters, installation of the new roof, and hot dogs for Mama, the total cost came to a hundred million NEVER GONNA HAPPEN.

“Heather, we have to do this. We can’t wait,” he said one night while we were walking the dogs and brainstorming creative ways to list “slightly-used children” on Craigslist.

“But I thought we’d have at least another year to save up for this kind of emergency.” Yes, a roof qualifies as an emergency IF YOUR DOG CAN PLAY FETCH WITH IT.

We walked a few more blocks in silence when I suddenly remembered that bout I had with SHINGLES! in 2009.

“Oh my god. You’re thinking we should make a sequel. Heather, there is no shingle company on earth who is going to see that video and think, ‘Refreshing to find someone SANE in this world!'”

“OH, COME ON. That video only gave you two nightmares at most. It’d be worth a try, right?” Cut to that night in bed where Jon sat with his laptop open, and I lay next to him rattling off ideas. It’s called foreplay.

“How about, ‘Dear GAF, Hi! We are huge fans of asphalt shingles.'”

“Then how about, ‘Dear GAF, My husband is an asshole.'”

While reading out loud Jon began to type, “‘Dear GAF, About a year and a half ago after delivering our second child, my wife came down with a case of shingles.'” He continued as eloquently as he always does to lay out an idea, that shingles don’t have to be scary at all, and if GAF was up for some fun then so were we.

Fast forward to twelve days ago, after almost three weeks of demolition and a team of men hammering and pounding and having to rent an industrial crane to lift the air conditioning unit off of the roof and problems we did not foresee concerning the gutters or downspouts and HOPING PRAYING that Marlo could nap through all of it…

There I am in a ten-pound dress I found at a vintage clothing shop, a mangled wig on my head, and as I’m climbing out the window onto the second story roof a thunderstorm swoops across the valley and I’m almost struck by lightning.

ALSO! The only window we can use to access the roof won’t stay up and is barely two feet wide. Jon is holding twenty pounds of camera and sound equipment WHILE HOLDING UP THE WINDOW so that I can dive back in before the rain causes all that mascara to run into my eyes and blind me.

We waited, climbed back out, another lightning strike. Three different times. Can you even imagine what the neighbors would have thought if they had been watching?

Honey, I know those blogger people don’t go to church anymore, but are you sure they aren’t into something sinister?

Yes! I like to dress up like Elvira and dance on my roof during thunderstorms! Don’t worry! The kids are inside gutting a pig so we can climb inside its carcass and nap! Jon films the whole thing because this circus addresses some fetish out there and, wow, are those people easily extorted! We finally broke out a weather map on Jon’s iPad and saw a five-minute window in the satellite imagery of the storm. FIVE MINUTES. Once that pocket hit we climbed back out the two-foot opening — me in my ten-pound dress, Jon with twenty pounds of equipment — and I shingled the shit out of that roof.

It still cost us a fortune, but the good people at GAF® have a sense of humor and provided the materials. Thanks to GAF® for helping us with the better kind of shingles, specifically, the kind that come with a lifetime warranty. GAF® has reduced the amount of resources used in the manufacturing of shingles (read more here) and do indeed offer a lifetime limited warranty on all of their laminated shingles.

So we don’t have to worry about our roof ever again. However, is there a third kind of shingles? Because I’m sensing a theme to the story of my life.