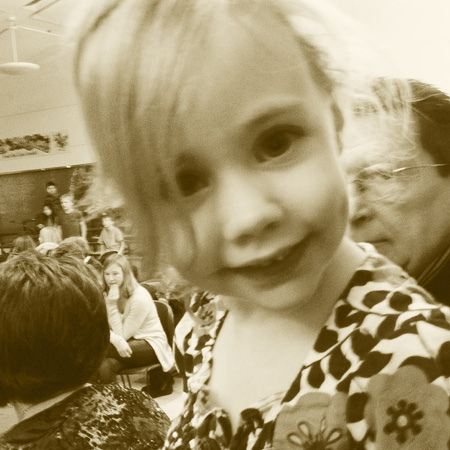 Marlo woke up at 6 AM on Saturday morning and, having grown suction cups on every limb overnight, attached herself to my body for the next seven hours. I had to be holding her or actively interacting with her every single second. I dated four guys in Los Angeles who acted exactly like that, except in this case I can’t just stop returning her calls.

I may have lost it mid-morning and told her I wanted to break up.

We’ve raised both girls under very similar circumstances if you don’t count the year Leta spent locked in cage at the bottom of a swamp (she had to learn to swim SOMEHOW). And yet, Leta looks forward to spending time alone. In fact, I saw her only twice Saturday morning: at breakfast and then three hours later when she realized she had yet to roll her eyes at me.

When Leta was two she liked having us in the room, but she most certainly did not want us all up in her stuff. Whereas, Marlo wants to paint us with her stuff. Here are her two stuffed kitties, HOLD THEM. Her puppy, HOLD IT. Her blankie, HOOOOOLD. And if you let any of it go the screws holding her brain together fall out and their tiny clink, clank against the wooden floor is our signal to protect our head from shrapnel.

I spent hours “coduring pitchers” with her, and then we moved on to making shit. That’s right. Shit. What the rest of you guys refer to as crafts. I know. I was a Mormon. When you’re born into the faith they pluck you from your mother’s arms within seconds of exiting her canal and hook you up to an IV of pipe cleaners, yarn and googly eyes. How could I possibly not love crafts? No way I’m getting my own planet with this attitude.

She likes to cut and glue construction paper. So we didn’t really make anything but a huge mess. That’s not the point. WE WERE MAKING. And I kept repeating this mantra in my head: This is fun. This is fun. This is— OH MY GOD GET THE GLUE STICK OUT OF YOUR EAR FOR CHRISSAKE.

These moments with her are fleeting, you do not have to tell me this. But I’m not going to sit here and lie and say that when she finally wanted to watch something on TV that I mourned getting up from that sticky, debris filled table and reluctantly gave in to that request. Nope. I clapped my damn hands, took a loving, sepia-toned snapshot in my brain of the previous hour and then performed a rather artful swan dive thirty feet across the room onto the couch.

Where I immediately assumed the fetal position.