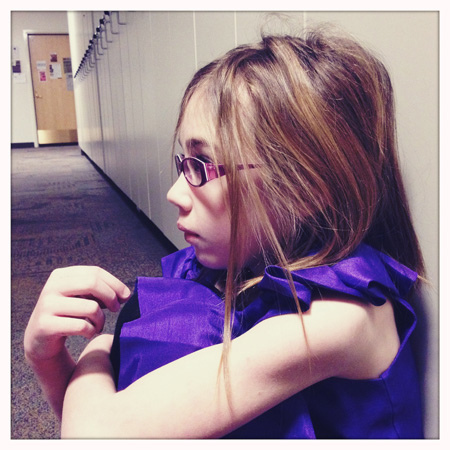 I’m going to give those who have been reading about you since your birth a chance for that to sink in. Hell, I need a chance for that to sink in. And yes, I’m going to use foul language because last year when I tried reading you the newsletter I had written for your birthday you stopped me two sentences in and said, “UGH. Are you done yet?” As if I were maliciously yanking out your toenails.

I figure you won’t be interested in reading these until you’re at an age when the use of “hell” is at the bottom of the list of things I’m worried about. No matter what your age, the first thing on that list will always be, “Is today the day I have to bail your sister out of jail?”

You’re a full-fledged second grader now who has physically taken off in the last year. My little girl who walked so late, who endured all those months of physical and occupational therapy because of motor delays can now tear across the monkey bars and swim by herself in the deep end of the pool. If we lived in a perennially warm climate you’d probably live in a pool, you love swimming so much. Which is saying a lot about someone who used to loathe the idea, who earlier last year would have stood at the edge of the water and said, “Surely this is where all the dead bodies go.”

The passionate intensity of your earlier years, an intensity that sometimes filled our days with exhausting drama has waned and given way to a much more casual temperament. You dress yourself in the morning, brush your own hair, pour your own cereal and clean up after yourself without being asked to do so. There is no more struggle. And Leta, struggle used to be at the core of your dynamic with everything in your world. You loved to struggle. You were Rocky and struggle was your Adrian.

We still see hints of that intensity, but now I would call it perfectionism. Hello, daughter of Heather Armstrong, granddaughter of The Avon World Sales Leader.

When you attempt something, you don’t want to be good at it. You want to be the best. This personality trait bares its fangs most noticeably when you practice piano. And here’s the thing: your skill level has far surpassed everything I know about reading music, so your father has to help you practice. Your father is very good at everything he tries, but he’s not a crazed fanatical overachiever like I am. Like you seem to be. So I’ve had to walk him through what goes on in your brain when you hit a wrong note or can’t hear a rhythm.

“Jon, that wrong note makes her think she’s going to end up homeless.”

“But that doesn’t make any sense,” he’ll say.

“True,” I concede. “But if you raise your voice while she’s in that spiral, not only will she end up homeless, she’ll end up homeless and then someone will steal her cardboard box.”

Sometimes when you guys are practicing and I hear you getting frustrated, I’ll peek my head around the corner, make eye contact with your father and mouth CARDBOARD BOX.

Last week you attended what is called Federation, a program where you play a couple of memorized songs in front of some independent experts who critique your performance. You’d been preparing for this occasion for a few months, and in the hours leading up to it you were so nervous, a bundle of trembling worry. We told you that it was okay to be nervous, that most people get nervous in situations like this. And then I excused myself and threw up because OH MY GOD. WHAT IF WE END UP HOMELESS?

Homeless and alone and covered in sores and cuddling our pet rat.

While waiting for your scheduled time you got very quiet, so I sat beside you and rubbed your back. I told you to try your best. That’s all that mattered. And then we entered a small room with five other kids. We sat patiently while the first three played their pieces, and then it was your turn. They called your number. Had there been a trashcan next to me I would have filled it with my breakfast. You confidently walked up to the piano, announced the name of your songs, and then sat down to play. Leta, sometimes I go through the day and I’m like, yeah. I’m a parent, this is what I do. I make sure my kids are safe and loved. And then there are moments like the one before you put your hands on those keys, when my heart tries to claw its way out of my body and I’m like, HOLY GOD. I AM A PARENT.

I’ve heard you practicing those songs for months, and never have you played them more perfectly than you did in that room under all that pressure. You nailed it. You totally kicked its ass. And when you walked back to your seat the look on your face let me know that you knew it. You were feeling the win.

I was so proud of you, but more than that, I was so happy to see you so proud of yourself. To see you feeling what it’s like to work so hard for something and reap success, to experience a win. Your life will be filled with so much more of this, and those two songs in that room will probably end up being a speck in your memory. Which is why I wanted to write it down. So that later I can show it to you and tell you that I was there. I was there in that room and I saw it happen. I witnessed it: my oldest child growing up.

Thank you for that gift.