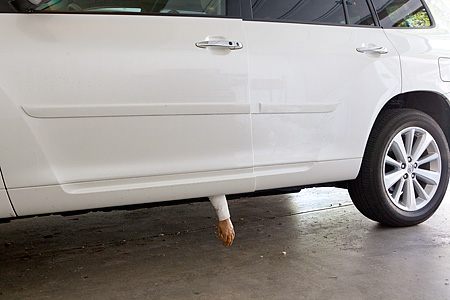 You guys know how much I hate Halloween, right? Like, the worst holiday of the year, loathe it, would rather skip over it and land right inside the open end of a Thanksgiving turkey. I know that makes me a horrible person because I have kids and I’m supposed to be sewing their costumes with my own two hands but HEY. I bet you have character flaws, too. Do you procrastinate? Do you leave dirty dishes in the sink? Do you litter? MIGHT AS WELL HATE HALLOWEEN.

There is, however, a day of the year I hate even more than Halloween. And I’m willing to bet more of you will side with me on this one: seriously, could someone please take an ax and bludgeon April Fools’ Day? Knock its head off. Lock it in a cage and drop it in the sea. Tie its hands behind its back and tickle it until it cries.

This year I was happy that it fell on a Sunday so that my exposure to it online would be minimal, and Tyrant, Cruelest Person Alive, wouldn’t be in my home. Before I go any further I should probably tell you that I’ve got a bear of a week ahead. I’m overwhelmed. I’m emotional. I’m worried about balancing everything to the point of waking up in the middle of the night with panic attacks. I tell you this not to elicit pity, only to give you a frame of reference for where my mind was when I opened the door this morning to leave the house. And this is what I saw:

Guys, I have not ever screamed like that in my life. Not even during childbirth. It was primeval. It shot up involuntarily from the bottom of my feet and out of my face. So loud, it was, that I temporarily lost my voice. I’m lucky I did not lose consciousness or a pulse.

Unfortunately, Marlo was standing a couple of feet behind me telling me goodbye when all of this went down and my scream in turn scared the shit out of her. So she started to cry right as my horror turned into tears, and there we were, the both of us crying. I felt like offering her one of my tampons.

Meanwhile Tyrant was trying not to fall in the floor he was laughing so hard. And, fine. Whatever. Now that I’m several hours away from the actual incident, okay. It was funny. You could have bottled up that scream, sold it to haunted houses and made millions. A video of my reaction to finding that arm hanging out of the car would have gone viral and next thing you know they’re playing it on the Today Show and Al Roker is standing in front of a weather screen dancing to a mash-up of my voice and “Thriller.”

But here’s the really evil part: Tyrant snuck into the garage LAST NIGHT to set up the whole thing thinking that I’d leave early to take Leta to school. Luckily Leta was with her father last night and this morning. Had she been with me and witnessed this I’m certain she would have been convinced that every time we opened the door to the garage a dead body would be waiting for us.

I can see that conversation now:

“But how do you KNOW that there won’t be a dead body in the garage?”

“Because I fired the man who would have put it there.”