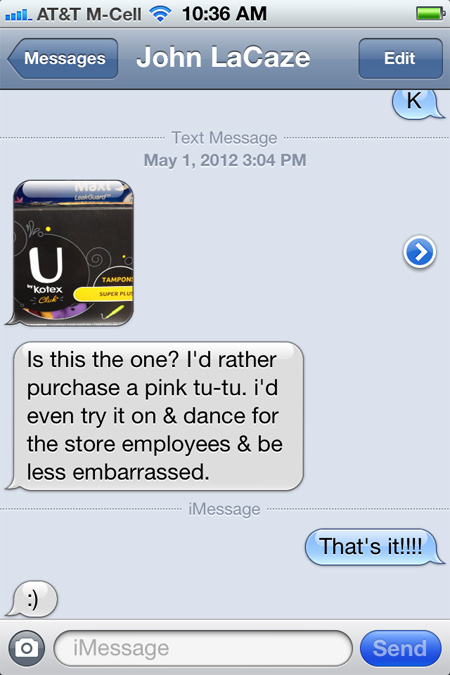 One afternoon last week, I don’t even remember what day it was (why have I not blocked this event out of my brain entirely?), Tyrant came upstairs into the office and he was carrying Marlo. Let me back up a second and tell you that before Tyrant joined the team here he didn’t really care for kids or dogs, or, you know, being a decent human being. Oh! And I may not be able to get him back for all the pranks he’s pulled on me over the years, but I can have him pick up my tampons:

Marlo is now Tyrant’s favorite little buddy. They make coffee together in the morning, play tag in and out of the living room and routinely go outside and pick flowers. It was on one of these flower-picking excursions in the backyard that Tyrant set Marlo down so he could cut a few stems from one of our blooming trees when suddenly she yelled, “WOOK! A STHNAAAAAKE! A STHNAAAAAKE!”

Gleefully. With much delight. Total euphoria. A snake, you guys! It’s, like, raining fucking panties!

He didn’t give it much thought because he didn’t believe she would know what she was talking about, but then he heard ITS RATTLE.

Yeah. Yep. THAT kind of sthnaaaaake. OF COURSE it was that kind of snake. It couldn’t just be a sweet little garden snake with a jaunty red hat singing the alphabet, no.

OH! And you want to know why she was able to identify a snake? Because she watches a shit ton of “Go, Diego, Go!” So you can go ahead and tell me that television is rotting her brain and I’ll just go ahead and pretend to jerk off.

He turned around to see a four to five foot long rattlesnake just a few feet from Marlo who was pretty much counting how many ways she was going to cuddle that thing. Santa Claus could have been standing there holding a chocolate fountain and she would have run past him to grab that snake and rub her nose on its belly.

Meanwhile Coco was going crazy (surprise!) and jumping at it (JUMPING. AT. IT.), causing it to curl itself up into the shape of my nightmares. It must have been amused at Coco’s posturing because it snapped its head at her but didn’t land a bite, a warning to get the hell away, you stupid little dog, don’t you know it killed a herd of deer before breakfast.

That’s what he came into the office to tell me, that Marlo had found a snake! And not just any old snake! A rattlesnake! In the backyard! Wheeeee!

The? What are… I mean… UH? We have a rattlesnake in our backyard?! Do we all just roll over and die now, because I’m not sure there is any way to go on living and breathing knowing that it could just slither in the door any second and OH. THAT DID IT. THAT IMAGE RIGHT THERE JUST DID ME IN. Next time you see me and it looks like I’m puking air it’s because my face is now frozen that way.

We called animal control (“Hi, remember me? Yeah, I’m the one who freaked out because a bird looked at her. How have you been?”) and they were pretty much useless. They didn’t have any traps for domestic use, so try to avoid it! Right. Try to avoid it. That is such great advice. I never would have thought of it.

I’m concerned about the kids, yes, but I’m more concerned about one, the idiot dog, and two, the morose dog who likes to hide out in the bushes and may accidentally stumble across this thing and can you even imagine the content he’d have for his poetry except oops he’s dead.

Tyrant called the vet who had a myriad of stories to tell, and her advice was to avoid the vaccine and instead take the dogs to snake training. Snake training?! Yeah. That was my reaction, too. You take the dogs into a room with LIVE SNAKES OH MY GOD I’M DEAD.

So, who would like to come sit on my back porch with a gun?