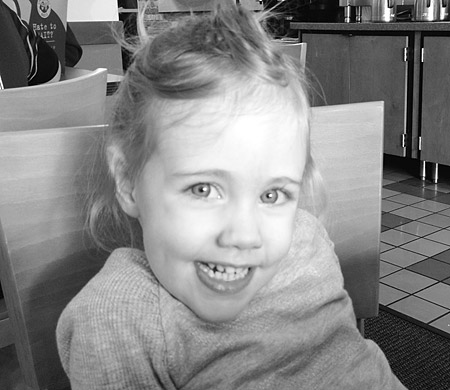 Three-years-olds. They are awful, horrible people. I didn’t say they were the WORST people but only because I’m sure there are murderers out there who listen to Nickelback.

You’ve never lived with a three year old? It goes something like this:

Marlo will turn three next month, and oh my. My soft, little dimpled Donette is showing signs of growing horns and webs between her toes. And it has hit suddenly, out of nowhere. One day she was full of wonder and singing Itsy Bitsy Spider in a funny voice and then BAM she’s looking me straight in the face as she takes her bowl of cereal and dumps it on the floor. She didn’t even break eye contact when she dropped the bowl and pointed at it, like, WITNESS THIS, BITCHEZ.

Last week while Leta was at her piano lesson I took Marlo to the store to pass some time. And normally, the old Marlo, the sweet two-year-old with the adorable lisp, she would have reached up and grabbed my hand as we walked through the door. She would have pointed at all the colorful packages and gasped. She would have toddled up and down the aisles causing every woman there with a ticking biological clock to strip naked and have sex with the guy stocking chicken broth.

But this Marlo, the nearing-three Marlo, she ripped her hand from my own when I lovingly reached down to hold it, hoarsely groaning, “STHOPPPP MY HAND.” That’s the phrase she uses when she wants to be left alone. When I brush her hair she screams, “STHOPPPP MY HAIR.” When I wipe her mouth she shrieks, “STHOPPPP MY FACE.” Fine, I’ll say. And then the adolescent me cannot resist licking both of my hands and rubbing them from her forehead all the way down to her neck.

Has anyone ever debarked their three-year-old? Details, please.

This Marlo picked up cans of soup and tried to stick them in her shorts. When I took the cans away she showed her competitive streak and threw her body in an arc to the floor, almost as elegantly as her sister once did. But here’s where Leta wins: Leta didn’t care if you walked away. She tantrumed because it was her body’s way of processing conflict. Marlo? Marlo cares. She tantrums because she wants the attention. So when I walk away and remove her audience/victim, she hops up and runs after me while screaming, “WAIT! WAIT!” Excuse me? Were you saying something? Because I was seriously underwhelmed with that performance and I’m going to leave a scathing Yelp review.

And then. UGH. It was one of those parenting moments depicted in movies and sitcoms, and when it happens in real life you’re like, GROSS. Network television GETS ME.

I had Marlo in my right arm, a bag of groceries in the other. And as I was unlocking the car she wrestled her way off of my hip to the ground and took off toward the back of the car. Instinct kicked in and I dropped everything: keys, purse, groceries, dignity. I managed to lunge two steps and grab her by the arm just as a car whipped by not even two feet from her face. My heart throbbing in my throat, I picked her up, put my face probably a little too close to hers and said very sternly, “DO NOT EVER DO THAT AGAIN.”

To which she replied in a mocking tone, “Blah blah blah.”

Oh no, you did not just blah me. Let’s cut to commercial so that we do not have to bleep my masterful violation of that one commandment saying never to take the Lord’s name in vain JESUS BALL SACK VICE GRIP ON YOUR NIPPLE CHRIST.

I bit my lower lip and tried to lower my heart rate as I opened the door and set her in the car seat. As I was buckling her in she laughed, shook her head back and forth and sang, “Dangewous! DANGEWOUS! DANGEWOUS!”

That was a week ago. She is still in a time out. Don’t worry, I’ve checked on her a couple of times to keep her hydrated.