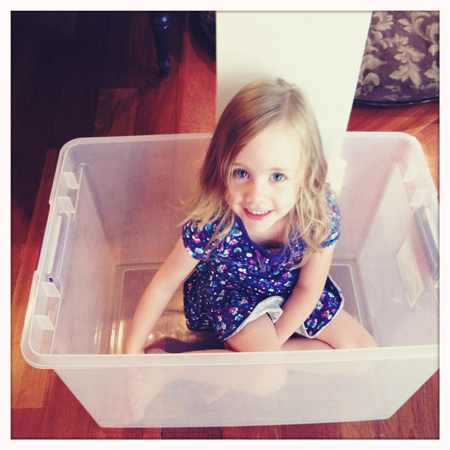 A few weeks ago I mentioned here that Marlo has started holding her poop (here we go!), and since then things have not progressed as much as I would have liked them to. She isn’t yet approaching me politely and asking, “May I be excused to eliminate my bowels, Master?” So, you know. I have failed motherhood.

We started her on a pretty strict regimen of Miralax, but if she goes one day without a dose her body can outwit the poop and she’s back to using all of the days on earth to hold it inside. I will get to the advice the doctor gave me, I promise, that’s coming, but you have to let me get there when the storyline calls for it. There are rules in blogging, people.

There is this one crazy person out there on the Internet who finds every mention of me anywhere and leaves a comment about how I am The Most Horrible Person Who Ever Lived because I wrote about giving Leta an enema when she was two. This person will not drop it, refuses to move on with life. He or she brings it up wherever and whenever they can. Heather Armstrong gave her daughter an enema AND WROTE ABOUT IT, so one, not only does my daughter have no hope of growing up to be a functioning human being, but two, YOU ARE READING ME. You! You right there! You are enabling and encouraging my monstrous behavior BY READING ME. How do you sleep at night?

You know the world is totally fucked when someone like me has a platform to write about enemas.

So, yeah. I gave Leta an enema when she was two. Turns out, a lot of parents have to give their kids enemas because constipation is pretty widespread among kids that age. Two days ago the doctor sat across from me and Marlo and said, “Have you tried giving her an enema?” She SUGGESTED it. A medical practitioner endorsed the administration of an enema. And here I am writing about it.

I told the doctor that I had indeed given Marlo an enema, and then all that Miralax we’d given her in the five days previous to that enema proceeded to make it’s way out of her body. Not all at once, no. Just every thirty minutes for the next two days. And the reason we were sitting there in that room is because we thought she might have a urinary tract infection as a result. And here I am writing about it.

The exact same thing happened to Leta, and I was terrified that once again I was going to have to live through the agonizing experience of watching my child fight and scream in pain while a nurse inserted a catheter to extract urine. Trust me, this is not something you want on your bucket list.

I had told Marlo that we were going to the doctor, and because that kid is a certifiable weirdo she walked around singing a joyful song about going to the doctor. When I put her in the car she asked, hopefully, if she was going to get a shot like last time. She wanted to get a shot. Maybe I shouldn’t have smoked dope when I was pregnant?

I answered, “No. You are going to pee. In a cup. So that they do not have to catheterize you. Okay?” Because I visualize positivity like a badass motherfucker.

“I’m going to pee! In a cup!” That is the only thing she said for the next hour. Like she had never heard any other words in her life. She said it to the man standing next to us in the elevator. She said it to the woman who checked us in. She announced it to the patients sitting across from us in the waiting room. She told the nurse who weighed her. And guess what? That kid peed the shit out of that cup.

Can I get a PHEW? Thank you.

From now on when anyone in my life accomplishes something awesome I’m am going to refer to it as peeing in a cup. You’re welcome to join me.

While the doctor gave me more advice about her constipation the test results from her urine sample came back. She did not have a urinary tract infection and was most likely just irritated from all the wiping that had taken place in the two-day aftermath of the enema. Glory to God in the highest, peace on earth goodwill toward men, the spirit of God like a fire is burning, popcorn popping on the apricot tree.

I have now written about giving both of my children enemas. On my website. For people to read. Oh, the horror.