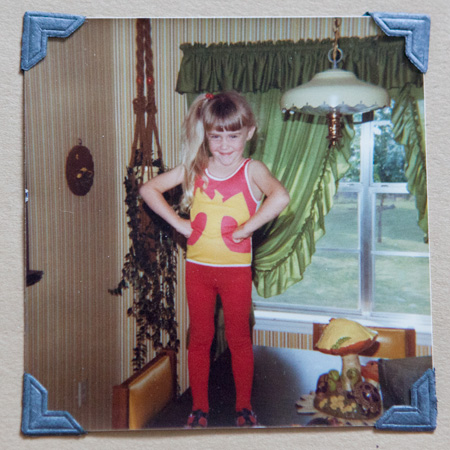 Where do I even begin with this?

We can start with, WHO LETS THEIR THREE-YEAR-OLD STAND ON TOP OF THE KITCHEN TABLE? Apparently, the future Avon World Sales Leader, that’s who. So for those of us who may have accidentally turned around at the grocery store and slammed our child into an end cap full of potato chips (raises hand), or looked away for one second as our kid fell backwards off the couch (raises other hand), at least we aren’t as deliberately evil as that woman.

Because if I had fallen off to one side I’d have knocked my head on that ghastly wallpaper. Designers in the Seventies must have all gotten together and said, “Whoever recreates the most convincing color of baby poop wins!” This designer won.

If I had fallen to the other side I’d have impaled myself on that enormous ceramic mushroom. At the hospital the doctor would have been like, “She fell on what?” And my mother would have puffed up her chest and said, “I’ll have you know it is a CENTERPIECE.”

I’m assuming she inherited that chandelier and those curtains from a polygamist.

The macrame plant holder? Cami pulled it out of her wardrobe, traveled back in time and hung it from the ceiling.

My mother did, however, let me wear my Wonder Woman Underoos as actual clothing, so despite the felonies she committed in interior design, you have to admit that she was pretty badass.

She’s taking me to dinner for my birthday tonight and we’ll spend the whole time talking about Marlo who is the same age as I was in this photo. She doesn’t have any Underoos, but I do let her wander around nude. There’s hope for me.