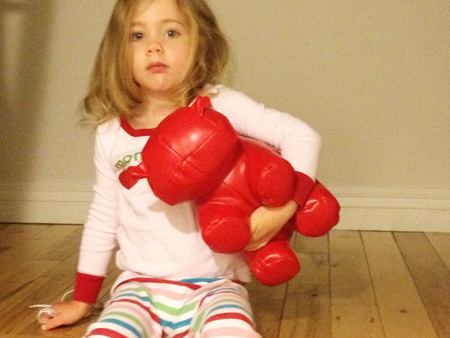 Last night after several days of being apart from my girls, I picked Marlo off of the ground as she ran to give me a hug. I squeezed her as tightly as I could without, you know, pulling a whole Of Mice and Men OOPS moment. When she pulled away to look me in the face I told her how much I had missed her and asked her how she was doing. Her smile spanned her whole face, and after taking a huge breath she answered, “I’M THREE!“

I’m totally going to borrow that. From now on when someone asks me how I’m doing and I happen to be doing really well I’m going to tell them that I’m three. This will also be my answer if I have recently pooped my pants or tried to bite a wall.

I was nervous that I’d have to start at square one with her sleep routine because she’d been traveling and not in the habit of sleeping in her bed. With the door closed. And her leg chained to the wall. So after we read stories and sang songs, I kissed her, said goodnight and braced for the impact. I bet if you had extensive video footage of people who are the parents of a three-year-old, you’d find that at least four or five times a day we cover our heads or shield our groins for no reason simply because those specific movements have become as routine as breathing.

Right then I covered my head.

Remarkably she slept all the way through the night. I had set my alarm for 5:30AM thinking she’d be awake, so when it went off I turned on the monitor and expected to hear shrieking. Instead I heard the deep, rhythmic breathing of her sleep and continued to listen to it until after 7AM. I COULD HAVE SLEPT IN UNTIL 7AM. If you are trying to decide whether or not to have kids, I think you should take this paragraph into careful consideration.

When she did wake up she called out for me, so I went to her room and scooped her into my arms to bring her back to my bed for a few minutes of cuddling. Before we got up to see if Leta was awake and head downstairs I told her to sit still so that I could run to the bathroom. I wasn’t gone for more than a minute, and when I returned she was rummaging around my bedside table and shoving a fourth Ricola cough drop into her mouth.

I know it was the fourth because when I asked her what she was doing and she opened her mouth to answer me, the other three fell out.

Damn, I missed that kid.