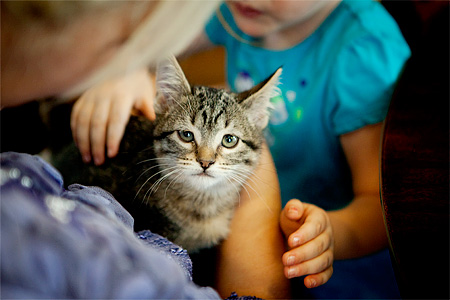 Cami and her fiancé recently moved to up to Salt Lake City from Provo into an apartment about a mile from here, one that allows pets. Well, shit. I just gave the whole thing away. You know exactly how this ends now: the chimpanzee went crazy and ripped her face off. She died from blood loss. Now I have to find somebody else to model clown clothes. The end.

You still want the story? FINE.

Yesterday she accompanied the girls and I on a stroll through Memory Grove, a gorgeous park in a canyon just north of downtown set aside to honor American Soldiers. We wandered slowly along the stream that branches off from City Creek so that Leta and Marlo could explore the various memorials set up along the perimeter. Just as we were about to enter a more wooded area I noticed a booth about a hundred yards away, one set up by a feline rescue organization. You’re thinking, wait. I thought you said CHIMPANZEE. And I’m like, EXACTLY. Dude was jammed inside a cat carrier. We HAD to take him home.

Cami has been talking about adopting a cat for weeks now, and each time she brings it up I point to Coco and say, “What if your luck is as good as mine?”

I know all of you know this but it bears repeating: adopting an animal is serious fucking business. It affects every aspect of your life. Especially if that animal is the walking embodiment of the tagline for a popular children’s breakfast cereal.

But she wouldn’t let it go, and when she saw that booth she turned to me with the hugest frown on her face.

“You’re not going to let me go over there, are you?” she asked, her hand gripping my arm.

Oh my god, seriously. How many times do I have to ask the people in my life this question: have you met me? Not only were we going to go over and look at all those precious, abandoned cats, we were going to scoop the sleeping two-month-old kitten out of its cage, bond with it for over a half hour and then take it home. Because, why learn from past experience? They make Prozac so that I don’t have to!

Cami adopted a kitten. Right there. We took it home and THAT’S when the chimpanzee ripped off Cami’s face.

Marlo and Leta couldn’t have been more excited. They bonded with it, too, so we decided to bring it back to the house for a few hours. When I pulled into the garage I immediately hopped out of the car and ran to the door so that I could lock the dogs safely in the backyard. However. I wasn’t fast enough, and Chuck instantly smelled that there was something wrong, something disturbing. I had to drag him to the back door, and when I put him outside he stood at the door, his eyes fixed through the glass in the direction of the garage, waiting. Coco? Coco didn’t notice a thing. She was just happy that we hadn’t gone missing! We’d returned! Who would have ever thought that we would come back home? IT NEVER HAPPENS!

I kept the dogs in the backyard while we played with the kitten in the kitchen, letting her wander and explore the corners and dark places made by cabinetry and furniture. I’ve never witnessed a more mellow kitten, one so calm and measured in the presence of a child like Marlo who is that kid in the cartoon hugging an animal so tightly that its eyeballs have popped out: “I will name him George, and I will hug him and pet him and squeeze him!”

But then the kitten wandered into view of the back door where Coco saw it for the first time. Jesus, I wish I had that reaction on video. That dog SHOOK HER HEAD, like she could not believe what she was seeing, and then she almost broke through the glass, barking at such a frenzied, high pitch that a whale showed up and tried to mate with her.

I had Cami take the cat upstairs to the guest room because I can’t leave the dogs in the backyard for more than an hour or both of them will get bored and begin to destroy things. Chuck had already dug a hole in a flower bed two-feet deep, and Coco was eating poop that had very recently come out of Chuck’s body. OH MY GOD, why did I let Cami adopt an animal? Doesn’t she know they’re awful? They’re awful and then they either rip your face off or they die and leave you heartbroken. Animals are assholes.

When I let the dogs inside Coco made the rounds to count everybody and then settled on the floor next to my feet. Chuck, however, ran upstairs and pressed his nose to the door of the guest room, and when he realized he could’t get in he paced the entire house. Down the hallway and back. Up the stairs, down the stairs. Around and around the island in the kitchen. Always making his way back to the door of the guest room. This went on for hours. By the time Cami took the kitten home he had walked at least two marathons inside the house. His imaginary balls were so chafed. That dog should have at least done some fundraising!

Why he was more interested in the cat than Coco, I’ll never know. But if I had to guess I’d say it’s because Coco has never experienced me bringing home a Coco. She’s never had a Coco move in and destroy her life. What’s the worst thing a cat could do, right?

Chuck knows the answer to that question.

A cat could be a Coco.