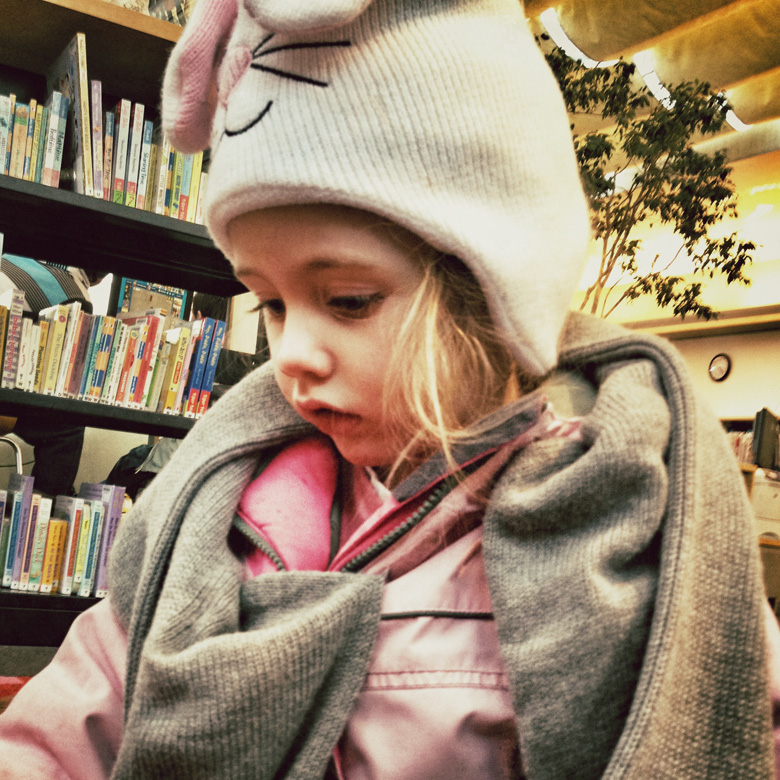 Have I mentioned here how different my kids are from each other? Yeah? Like, too many times? You want me to shut up and change the subject? You want me to stop asking questions? Who crowned you blog police? Oprah? Jesus? Zuckerberg? In that order?

Yesterday I took both girls on a trip to the library because Leta keeps running out of reading material. Her homework requires her to read only 20 minutes a night, but I let her read until she falls asleep so she’s been hitting the 45-minute mark. That’s hundreds of pages a week. Marlo? Marlo sings the alphabet like this: “… Q, R, S, A, B, C, W, X, A, B, C.”

When we arrived at the kids’ section Leta took off and Marlo headed straight for the amazing little side rooms they’ve designed for children to explore. One room looks like a cabin, another like a faraway planet. I sat down on a nearby kid-sized couch so that she could examine each room with the lead of her own imagination. In other words, I’m lazy.

I was flipping through a children’s book that was sitting on the cushion next to me when I heard my child scream, “HI!”

I turned to see her cornering a much smaller child, and before I could get up to tell her to lower her voice she continued, “WHAT YOUR NAME BE?”

What your name be.

Apparently, you can take the woman out of the South, but you can’t take the South out of her children.

After he answered her I told her to keep her voice down which is a really dumb thing to say to a kid her age. They think whispering means to yell in a really raspy voice. It’s what would happen if Don Corleone was only allowed to communicate through a megaphone.

And that’s what she continued to do, scream-whisper, dragging the boy by the hand through the planet room, up and down an installation that looked like an iceberg. And can I just say, WHOA, my kid is big. The boy’s father told me he had just turned two, so, yeah, of course she was bigger. But she looked like a bumbling giant about to swallow a whole meal. I wouldn’t have blinked an eye if she had tried to put his torso in her mouth.

I apologized in advance to the boy’s father if Marlo suddenly mutated into The Hulk and explained, “It’s so weird to have a kid who experiences no stranger danger. She’ll talk to anyone.”

“He will, too,” and he pointed to his son. “I’m glad they’re getting along. He’s usually the one initiating things.”

“My almost nine-year-old is somewhere browsing books,” I said. “When she was this age she’d have been clinging to my leg, desperately trying not to make eye contact with anyone.”

I nodded and remembered the months leading up to Marlo’s birth, wondering aloud here if this baby would be exactly like her sister. And so many of you who have multiple children were like, LISTEN. WORRY YOURSELF NOT. And good god, were you right. Which is why I think I should share these differences here for those of you wondering the same thing. Every kid is wildly, beautifully, hysterically different from the one who came before and any who come after. Witnessing those differences emerge is one of the very best things about the years I have spent as a parent, says the youngest of three children who is the only one who votes Democrat and thinks marijuana should be legal HI MOM HI DAD SURE GLAD YOU LOVE ME.