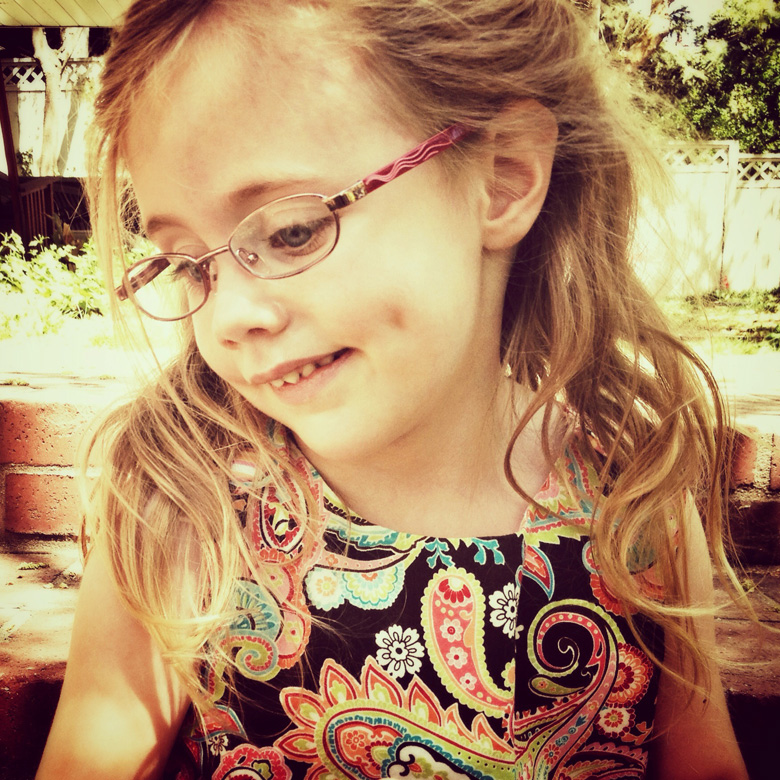 Last Friday you turned four years old. You had asked me the night before if you were going to be four when you woke up, so the first thing out of your mouth there in the dark as I walked into your room was a jarring, “AM I FOUR YET?!” I whispered yes because it was very early and your sister was still asleep, but before I could even turn on your light you screamed, “I ALWAYSTH WANTED TO BE FOUR!” Dude, look at you tearing through your bucket list.

The previous day I had received a call from one of your camp counselors informing me that while on a field trip to a local park you had taken off your glasses and set them down somewhere. Somewhere. I imagine that it sounded more like, “Sthomewhere,” when they asked you where they were. They had tried diligently to find them, but they were sorry to inform me that they were lost. They felt terrible and I think I surprised them when I laughed. Because “sthetting them down sthomewhere” is not the fate I had expected for your glasses. No. I expected a call from the police telling me that you had stolen a car, tied your glasses to the bumper and written YOLO, BITCHEZ on the rear window and they found you stunt driving donuts out on the Bonneville Salt Flats. With a hostage in the trunk.

And yes, you got glasses a few months ago. You probably won’t remember life without them, but here I am with my vision still going strong and I have two bespectacled children. I don’t know anything about glasses, only that I have to make sure that you and your sister keep them in good repair and are able to find them. It’s now a part of the evening and morning rituals: brushing teeth, brushing hair, appropriate attire, books in the evening, backpacks in the morning, and then finally SHOW ME YOUR GLASSES. Twice last week your answer to me in the morning was, “I don’t wear glassthesth,” while your sister ran to your room and retrieved them from your dresser. You are so lucky to have her, Marlo. Remember that. And give her a fair price when you hire her to write your term paper. She will need that money to make your bail.

When I picked you up from camp that day they explained again what had happened and apologized profusely. I shook my head and said that I was surprised that it had taken this long and that I’d have a talk with you about leisurely taking them off sthomewhere. As we walked to the car Leta asked you to explain to her how exactly you had lost them, and you stopped cold, straightened your arms angrily at your side and yelled, “I DIDN’T LOSTHE THEM. A lady took them.”

A lady took them. That night Leta and I imitated you saying that over and over again until Leta was blue in the face from laughing so hard.

“I have a granddaughter.”

“A monkey came through my window.”

“My cat has blue clawsth.”

“Tomorrow when I can walk.”

All of these ill-informed and dishonest things that come out of your mouth, they become inside jokes between me and your sister. And that has brought us closer together, the mutual joy we experience because you exist. The one about the cat in particular had us giggling for days. We were headed out the door for school when you stopped us all at the door and said, “Be careful, Mom. My cat is outsthide in the sthtreet and you could run her over.”

Leta’s face curled itself into total confusion. “You got her a cat?!” she asked. “Why did you get her a cat? You haven’t ever gotten me a cat!”

“I AM NOT LYING,” you yelled. “My cat has blue clawsth. If you run it over there will be blue all over the sthtreet.”

Leta started laughing and began to explain to you that cats don’t have blue claws when I stopped and corrected her. “Blue CLAWSTH.”

Some people are appalled that I’d ever bring attention to your lisp, and they can have their outrage. They are entitled to it. But they do not live with you and do not understand how fundamental it is to your spirit. Already you are beginning to grow out of it, and that makes me as sad as the day I had to put all of your newborn clothes into storage. For everyone who knows you, it’s one of the best parts of their days, hearing you talk. It’s as much a part of who you are as your giant blue eyes, the dimple as deep as a crater, the way you trip over your feet and immediately jump up to assure everyone, “I’m okay! I’m okay!” The elaborate tales you weave involving animals trapped inside the walls of your closet and the way your lisp emphasizes the severity of the situation. It’s marvelous. It’s hilarious. Its melody hums inside our chests. It’s Marlo.

I won’t lie, I was very scared of three. I was terrified of the inevitable tantrums and meltdowns that I had previewed with your stubborn older sister. And here on the other side of it I will tell you that the last year with you has been joyous. You’re a lot more spontaneous and easy going than your older sister, and I am not dissing her in any way by saying that. You two are just different. Example: your sister is self-motivated to do her homework. You, I imagine, will indulge your pyromania with sheets of multiplication tables and wooden siding you’ve ripped from the back of the neighbor’s house.

When you broke your arm and we spent over six hours in two different hospitals, you didn’t complain once. You went along for the ride. That’s how I would explain your personality to people. You are up for anything, you want to go along for the ride. In fact, you hope that ride is bumpy, turns upside down, shoots through a ring of fire, and is being chased by cannibals.

You personality is, “Who’s up for committing a felony?!”

You personality is pushing a new doll in a new stroller around the living room at your birthday party, stopping in front of your cousin and shout-whispering, “Watch this baby. If she cries, you yell at her.”

You are the youngest grandchild on both sides of the family, but that’s not the reason everyone fights to to be around you. That’s not the reason they show up at the house and before they even say hello they ask, “Where’s Marlo?” pushing past me and running to swing you in their arms.

You’re the child people envision when they think about what it might be like to have a family. You are the kid sitting on my shoulders, your head thrown back in laughter, an expression of eternal joy. You cuddle with your whole body, your arms and legs wrapped around my torso, your head burrowed deep under my arm, an unspoken love filtered down into a fleeting embrace. You clap and squeal when confronted with good news. You make funny faces, you attempt to make crude nosies, you run and hug every animal you see whether or not they want to be hugged. You tell everyone to be quiet so that you can show them your “wedgie dance” where you pull your shorts into the crack of your butt and waddle it around while singing, “NA NA NA NA NAHHHH.” It’s funny, yes, but the best part is that no one finds it funnier than you do.

I want you to stay like this forever. Please don’t go. Remain here in this tiny body with your stubbed toes, your hands covered in purple marker, your hair tangled in coconut-scented sunscreen and the remains of a pink popsicle, here where you save me every day from the overwhelming circumstances of my adult life, here where you heal the dread that wakes me up because what if one of the things I’m juggling hits the ground? Stay here with the bubbles and let me pop them with you, let me get lost in your purity, free from deadlines and bills, free from anger and heartbreak and tears that come from intangible pain.

You are happiness in all of its definitions, in all of its forms, unable to be contained, unable to stay here forever. And because you won’t, because you will run head first into the burning building of what it means to grow up, of what it means to develop a sense of guilt and dread but also an appreciation for beauty and the ability to value who and what you are in these words that I have written, I’ll just look forward to the bumpy ride. Take me with you.