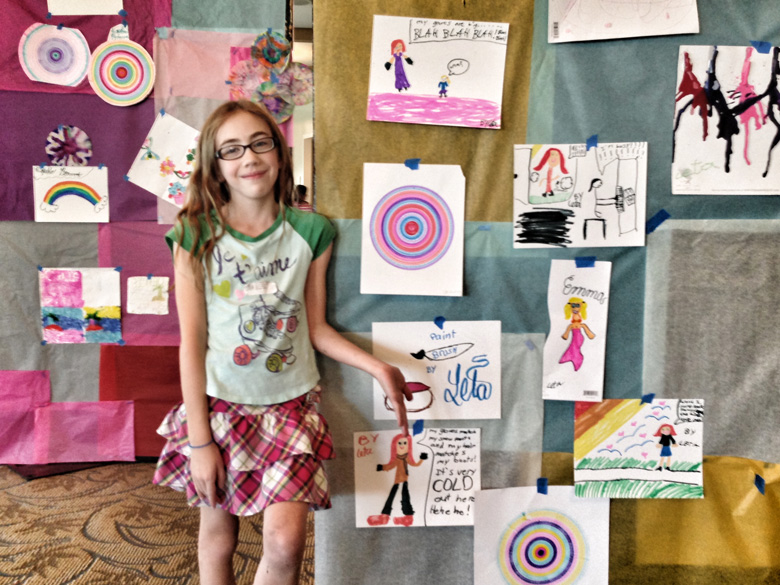 One night last week Leta’s camp group put on an art show and had an “over night” at the facility. She was really excited to show me her projects and the donuts and cookies and unlimited refills of lemonade laid out for the guests. But the thing that had her head spinning in circles was the idea of getting to stay up late. Remember that feeling as a kid? It’s kind of hard to, though, when you look at any horizontal surface and the first thought that comes to your head is I could lie down right there.

Park bench. Sidewalk. The countertop at Carl’s Jr. The lid of spreadable butter. I could nap the shit out of any of those places.

Leta still goes to bed relatively early. I’ve always been strict about my kids and their bedtimes because sleep has such a profound effect on their mood and behavior. So at 8pm I have her start her routine: pajamas, teeth, hair— wait, I should stop there and mention that I still have to help her brush her hair because… well, because she has my hair. And when I was her age I’d peer up at my mother in the bathroom mirror and she’d look like Edward Scissorhands carving a vomiting hippopotamus out of my head.

You guys, I’ve got detangler (Avon, of course!

), and that is helping. But she wakes up and it’s like, I have got to call a landscaper right now. It’s nuts. Some of you mentioned a specific kind of brush awhile ago, and oh. I’m googling it now… whoa… THERE IS AN INDUSTRY BASED ENTIRELY ON MY DAUGHTER’S HAIR. What is all this stuff? When I was her age I just screamed when my mom brushed my hair. They don’t have to have tangled hair or record their favorite songs off of the radio onto a cassette tape? Jesus. Our children are going to be living with us for the rest of our lives, you know this, right?

So, yeah. 8PM. She’s in bed usually by 8:15 and that’s when we talk. All the things we didn’t cover on the ride home from school/camp or during dinner. How is she feeling about this? Or this? Sometimes she doesn’t want to talk and I know not to push her. Pushing her annoys her, closes her up even more, slams the door. So I tenderly walk way from the desire to cradle her like a newborn and demand that she stop it, stop it right now. Stop these limbs from crawling out, branches unfolding, reaching for new air and sun. Stop not needing me for everything.

During the few days a week that I spend away from her I can feel the folds of my heart curling up like dried paper, brittle from the ache of missing.

I leave her to read herself to sleep, a privilege of her age and trustworthiness. Normally I check her room to see if the light is still on and it’s always off by 9. They were going to be staying up until at least 11:30 at this overnight, and as I was talking with a few other parents during the art show I found myself to be the only one enforcing this bedtime. It was especially shocking to them that I was making her go to bed this early during the summer. Which is fine. Look. Kids are different. Parents are different. NOTHING IS RIGHT OR WRONG. If your kid can go to bed at midnight and be fine the next day, then you certainly do not need the advice that I was so thoroughly unprepared and unqualified to give you.

It gets difficult when she complains that other kids get to stay up later, and she’s so totally incapable of understanding why I want her to get so much sleep. Incapable, maybe unwilling. I say unwilling because she stayed up until almost 1AM on that over night. I found out the following day in three different ways when I picked her up: one) her mood, two) her mood, three) there is this element of someone’s disposition called a “mood” and that is number three.

She was so unreasonable and hysterical and beyond the ability to form coherent sentences that when I asked her what time she had gone to bed the night before she screamed, “I DON’T EVEN KNOW!”

“I TRIED TO MAKE IT TO TWO O’CLOCK, BUT I JUST. WHATEVER. WHATEVER!” She wasn’t yelling. She was just spitting consonants and syllables because that was the only way they could make it out of her mouth.

“Leta,” I said as soothingly as possible. “I have a very hard time—”

I was pushing her. She wanted to close up. I knew to stop. I knew to leave it and go home and crawl up next to her on the couch as she fell limp and exhausted into the curve of my underarm.

But right then I knew to leave her there in the backseat of the car, alone with her thoughts, growing up and out into 2AM nights and days where she’s old enough to find a ride home and recover without me leaning over and smelling the detangler in her hair.