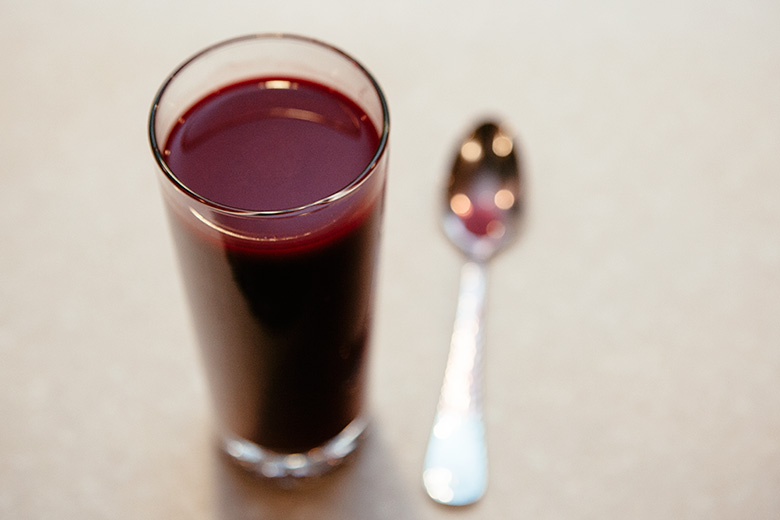 (Forgive any typos, I’ve been awake all night with Leta who has yet another high fever. Damn these winter bugs.)

On Tuesday night Leta had a double piano lesson, an unusual event for that night of the week. Last week she missed her lesson due to illness and this week her teacher is out of town for the normal Thursday night event. I usually look forward to these nights that I get to spend out alone with Marlo, the two of us eating dinner at Whole Fruits where, as I’m paying for dinner, she will tell the cashier, “My mom is going to buy me three cookiesth from over there,” having not discussed this with me beforehand.

I did not buy her those cookiesth. At least, not right then.

Tuesday night I felt trepidation, however, being on day two of a five-day juice cleanse. Yes. A juice cleanse. One of those things. Those fads. Those ridiculous things that people do to their bodies that some would argue have no nutritional benefit whatsoever. Juice and only juice for five straight days. You’ve already skipped to the bottom of this post to leave a comment calling me an idiot. Listen. My being an idiot has nothing to do with deciding to do a juice cleanse and everything to do with my I.Q. So try to be accurate in your comment.

Our Whole Fruits makes a killer chicken tikka masala that I always put on the same plate as a mound of rice for Marlo. She calls it “the sthpicy sthtuff” and mixes it with a few bites of her rice, and when she noticed that I wasn’t filling the plate with it she tapped me on the leg several times.

“What? I’m getting you rice,” I explained. “You were really excited about the rice.”

“Meow,” she said in return.

Marlo does this thing that is a lot more adorable than I am giving her credit for where she will say “meow” in a very clipped voice, very soft and low, her lips barely moving. And she knows it’s frustrating to everyone but her and yet simultaneously hysterical.

“Meow is not helping me.”

“You tapped my leg for a reason.”

She finally took mercy on me and repeatedly used her index finger to point to the chicken tikka masala. “The sthpicy sthtuff.”

I added a few spoonfuls to the plate thinking that the aroma would knock me over with a hunger pang, but this has been the most surprising thing about this cleanse AND THERE HAVE BEEN MANY SURPRISING THINGS AT LEAST TWO ALREADY.

I don’t feel hunger like I thought I would. Here I am on the morning of the fourth day of this cleanse and the only time I felt actual hunger was when I forgot to drink the lunch portion Tuesday afternoon. Okay. That’s not true. Twice. I experienced hunger twice. Once Tuesday afternoon. The first time was the first night when Leta was eating a bean and cheese burrito and I sized that thing up and realized I could fit the whole thing down my throat without chewing it. TECHNICALLY NOT A SOLID FOOD SINCE I WOULDN’T BE USING MY TEETH. I also contemplated eating the granite countertop.

I had this idea that since I’ve already eliminated most of the bad stuff from my diet that this cleanse would be a lot easier than it has been: I don’t eat any grains. I rarely consume any dairy. I eat no processed sugar. But day one hit me like a hammer to the head and the fatigue has been grueling. I battled several hours with my brain on the first night over whether or not to give up, ultimately calling on the same quadrant in my skull that kept my feet moving during the marathon. And so here I am on the morning of day four still going, still thinking that people who enjoy these cleanses are certifiably insane.

WHO ARE YOU PEOPLE? Take out your batteries and show them to us.

Mornings are fantastic (minus this morning, this morning was not fantastic). I feel rested when I get out of bed, and I haven’t been able to say that in a very long time (minus this morning, I was not rested this morning). However, there is a debilitating afternoon slump that verges on paralyzing. I eat a lot of animal protein, so I’m guessing my body is missing this component of my usual diet. I get so tired that I feel like I could sleep through a Republican winning the presidential election.

Why did I do this? I’ve talked with several friends who’ve done something similar, all for different reasons. I got a little off track with my diet in Haiti and continued down several winding paths throughout the holidays (good lord, the bowls and bowls of roasted pistachios). I wanted a hard reboot. A fresh start. I wanted to look at my cravings (HELLO, SALT), examine them from a distance and see what I could do better. I also wanted this exercise in self-discipline that many religious people including Mormons go through as a means of self improvement. This isn’t technically a fast, but there is a similar goal: the delay of gratification. If you listen to your brain during the more painful moments, you learn quite a bit about yourself and how your body copes. You realize how strong you can be. It’s interesting to grapple with your weaknesses in such a visceral and raw way.

I’d never do this for longer than five days. It’s just not compatible with my exercise regimen. This isn’t for everyone, no. It doesn’t cure diseases. It will not solve your credit problems or improve your relationship with your father. It will not organize your closet or clean out your garage. You might lose weight but I’m willing to bet you’d put most of it right back on once you went back to your normal way of eating. I’m sharing this here only because it’s an honest account of what this feels like in case you were ever considering the same endeavor. These are all my initial thoughts on this process. It’s not fun, and when it’s over I will most likely examine the pros and cons in a more thorough way and share that with you. (Earlier I saw a box of raisins—RAISINS—and I thought, “What a glorious food!” Glorious. If I saw a the sun setting over the ocean right now I think my brain would explode.)

But here, just on the other side of halfway through, I’ve learned so much about myself. It’s already been worth it.