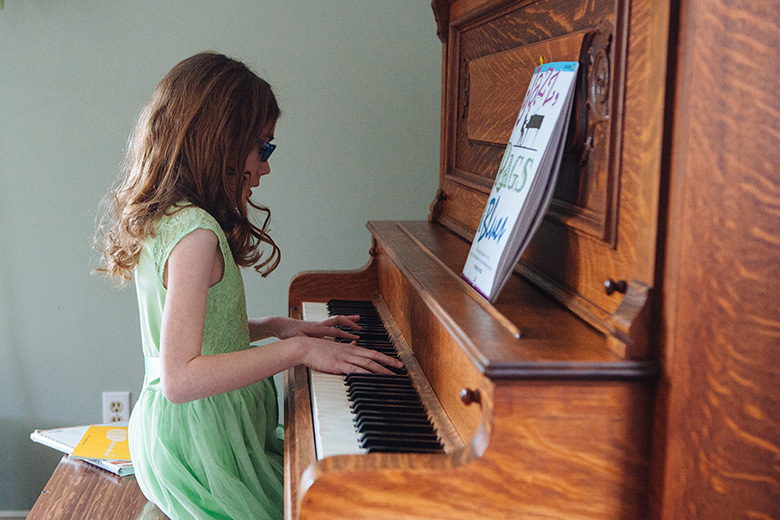 Leta is rapidly coming up on three years of piano lessons, the one extra curricular activity that I’ve required she stick to. I’ve already let her give up wrestling, bobsledding, welding, and scab collecting, but piano? Nope. It hasn’t been easy. I’ve had to strap her to the bench a few times with some bungee cords and drip water on her head until she hit the right notes, but it worked.

The truth is, it hasn’t always been easy. New songs for her can be frustrating and every time she brings one home there is the eventual meltdown wherein she slams her hands on the keys and proclaims she will never be able to play it, but then two weeks later she has it memorized and can play it upside-down while eating a bologna sandwich.

Fourth grade homework and projects have for her been a painful introduction into what time management and self motivation looks like, but when it comes to hard work I’m not sure there has been anything more revelatory to her about it in her life than piano playing. It takes a lot of hard work to learn a new song. It is then even harder to perfect those pesky sixteenth notes. What is hardest, however, is stopping a game on the iPad to sit down at the piano to spend valuable afternoon hours practicing a song written in the 17th century. WHY CAN’T SHE JUST PLAY THE THEME SONG TO FROZEN.

The problem is that she’s good. She’s really good. And now that I know and her teacher knows how good she is, it would be a tragedy to let her stop. I’ve recently written about some more serious things here (GROSS SELF HELP REVELATIONS) and, sorry, I’m about to do it again: in the next few years there is a window of opportunity for Leta’s talent to grow, and I am fortunate enough to have the resources and time to help her. I feel a duty to her talent as her mother, and I know that if I don’t work as hard as she does toward feeding it then I will deeply regret it. Helping the piano player that is in her fully develop is one of the greatest gifts I can give to her.

Recently her work and project load got so busy that even though she could play most of her pieces well she would dramatically slump on the floor when I told her it was time to practice. She even started to race through practicing, and the two pieces she had to have perfected for an upcoming Federation were no where near where they needed to be in terms of precision. Since she has far surpassed my ability to read and play music I talked to her piano teacher about this, about what I could do to encourage her. Should I go back to dripping water on her head? Maybe lock her in an empty, dark room and blast the sound of crying babies through a set of speakers? Dress up like Kathy Bates in “Misery” and nibble the handle of a baseball bat?

She suggested that we split up her practice sessions, twenty minutes here, twenty minutes there, twenty minutes back over here. Breaks in between. I decided to augment this approach by sitting in the room with Leta to give her words of encouragement. This is time I can give her since I work from home and have a laptop. So that’s what we’ve been doing for the last month. We’ve been practicing piano together with a timer set for twenty minutes. Within days of starting this technique her attitude had done a total 180. Instead of knocking herself backwards with the momentum of her rolling eyes, she started skipping to the piano. And not just because I was shooting a gun at her feet.

Those two Federation pieces have been at the center of every practice, and can I just say that when I looked at the sheet music I got a nervous rash, died and was unable to be resuscitated by professionals. I’m still dead and blogging this from the Spirit World. MORMONS WERE RIGHT DAMMIT.

There are very specific spots, specific transitions in both songs that have given her problems since the first day she started learning them. Who wouldn’t have problems? Those guys in the YouTube videos surely had problems and if they didn’t then it must be really nice having poop that doesn’t stink.

Federation was Saturday afternoon, and in the days leading up to it those specific spots were still rearing their heads. We’d been concentrating on those spots during practice, but my god, those songs are hard. She had rarely played through either piece perfectly, and on Saturday morning she asked me how I thought she would do in front of the judges.

“Have you been preparing?” I asked in return.

“Yes! Every day! Multiple times every day!” she responded.

“Do you feel prepared?”

“I know. Some parts seem almost impossible, don’t they? I’m already so proud of the work you’ve put into working through those parts. You’ve worked really, really hard. I think you’re prepared, Leta.” I then hugged her as hard as I could and kissed the top of her head. One day she will be too tall for that and she’ll wipe the kiss from her shin.

She was a total bundle of nerves as we got dressed and ready to leave. She was more nervous than she ever has been before one of these events, pacing, biting her lip. I could tell she was counting out the music in her head. This stark change from previous times let me know that this really meant something to her, and when I realized this I was like OH GOD OH GOD OH GOD. That feeling a mother bird has when it watches its baby falling out of the nest and is thinking flap your wings, flap your wings, flap your wings JESUS CHRIST WHY DIDN’T I INSTALL A PARACHUTE.

Marlo loves accompanying us to these events because there are long halls through which she can run and pretend she is a kite. A deranged kite with a death wish. When we arrived at the building and found the performance room Leta and I did our best to indulge Marlo while we waited, although every other minute one of us was whisper-shouting KEEP IT DOWN. Several times Leta took in a huge breath and held it for a while, an involuntary way of dealing with her nerves. Several times Marlo came up and butted her head into Leta’s stomach causing Leta to cough out that breath, Marlo’s voluntary way of dealing with the fact that not only was this not her show but it hadn’t even been picked up for another season.

Finally the woman in charge peeked her head through the door of the small room and called everyone in: us and other groups gathered for two other piano players. We all clambered in, the three of us at the very back of the room. SEE: DERANGED, HEAD-BUTTING KITE. We barely had time to settle into our chairs before Leta was called to the front to begin playing. FLAP YOUR WINGS OH MY GOD.

Within seconds she had placed her sheet music in front of the judges, announced her pieces and sat down on the bench. Both she and I took a simultaneous gulp of air before her fingers hit the keys. And so it began.

Audio and video recording are not allowed during these events, but if I had broken the rules you’d see my gangly ten-year-old sitting in front of that piano delivering every note with an accuracy she had not ever performed, an accuracy and a feeling for the movement and rhythm of the music that goes to the heart of why she is so good. She understands music. My child couldn’t have played either piece better, and the best part is that she knew it. She was so proud of herself. THIS. This is what I want for her. This. THIIIIISSSS!!!!!!!

When she came to sit at the back of the room her face was beaming and flushed from hours of nerves. I was smiling so wide my face hurt. Marlo had climbed into my lap by that point and was cradled in such a way that I couldn’t release one of my hands to give Leta a very quiet high five. She leaned over and whispered in my ear, “I did so good, didn’t I!” It was most definitely not a question.

Marlo fell asleep about two seconds after Leta sat down and remained out cold for both of the other performances. A couple of times she verged on a jarring snore but I shifted my weight enough to stop it from happening. THAT would have been so awesome.

“Sorry my child interrupted the song you’ve been practicing for the last six months by snorting like a dying pig.”

When it was over and everyone stood to leave I tried to maneuver her onto my shoulder so she could continue to snooze, but she jolted awake.

“I TOOK A NAP!” she shouted before anyone stepped foot out of the room. “I TOOK A LONG NAP! I JUST WOKE UP!”

Might as well tell those other kids that their piano playing is so boring that you’ve taken shits that had more expression.