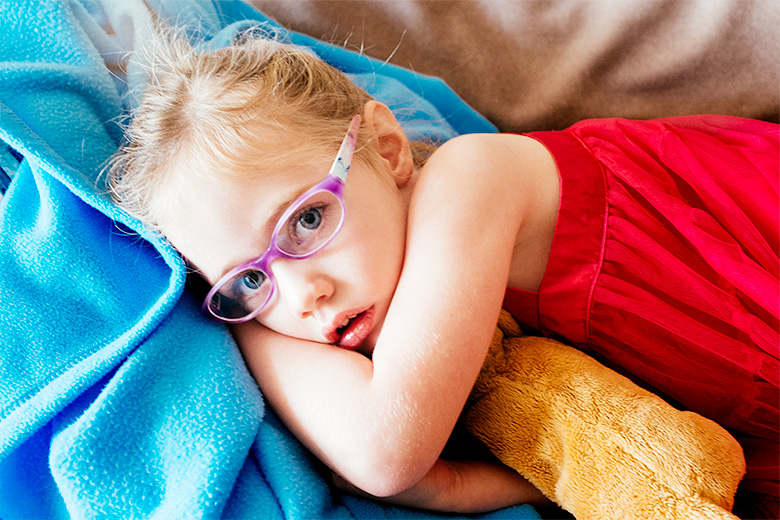 I immediately ran to her room where she was in tears and saying that she felt like she was going to throw up. I carried her on my shoulder to my bathroom, felt the heat coming off of her face, and had her kneel at the toilet while I fumbled around in my vanity for medicine and a thermometer. She didn’t throw up, but she did have a 101 degree fever. So I gave her some ibuprofen, grabbed a towel, and headed for my bed, a dimly lit walk to what would be my prison cell for the next few hours. Listen, I know. Only a horrible mother would say something like that, but you already know that I am perfectly comfortable with that distinction. If my kids were to give me an honest Mother’s Day present it’d be a coffee mug that says, “World’s Worst Morning Person.” And $20 to cover the copay for my therapist.

For the next three hours Marlo demanded water, colder water, water that was colder than that. Had I not heard her? She barked that the wet wipe she was using to blow her nose wasn’t wet enough. She complained that it was too hot and then too cold and then too hot again. She shook her leg constantly like she had to go to the bathroom but refused to go to the bathroom. And, of course, she never fell back asleep. That shit only happens in commercials. And only because the kid pretending to be asleep was forced into acting by his mother who is exploiting his childhood for money. Let us sit back and judge and wag our fingers. Can you even believe her? I totally hate her.

At 7AM I turned on a “movie,” her word for anything on television, and told her that if she needed to throw up it would be nice if she could keep it on the towel, or maybe cup it in her hands and wait with it there until I returned. I needed to get Leta out of bed, let the dogs out of their crates and feed them breakfast. The usual start to morning madness. I know I’m not the only person who loathes mornings, so maybe if you, too, cannot stand that part of the day you could just nod and let me feel the vibration of it over here so that I know that I’m not alone. Thank you.

Oh wait, all of that collective energy was just undone by own mother who walks more than 20,000 steps before 7AM. With makeup on. In a dress. On the phone with the President.

Once I got the dogs outside I realized that I didn’t really have anything else to do until it was time to take Leta to school. Because, well, she’s ten years old and takes care of all of her own needs. After checking to make sure that Marlo hadn’t decorated my room with vomit, I accompanied Leta when she got dressed and brushed her hair and teeth but only to make myself feel useful. Then we all gathered in my bed and watched “movies.”

“Mom,” Leta leaned over and whispered in my ear. “Why does this morning seem so easy?”

I pulled my head back with a jolt in involuntary agreement. “You’re right!” I agreed. “I guess… neither of us is arguing with Marlo.”

“THAT IS IT!” she conceded loudly.

This makes it seem like Marlo is a lot of work and that is the exact point I am trying to make oh my god. For one morning I experienced what it would be like to have to get a ten-year-old ready for school in the morning and no one else and the ten-year-old even pointed out how easy it was. I’D WALK 20,000 STEPS IN A DRESS BEFORE 7AM IF I ONLY HAD TO GET ONE TEN-YEAR-OLD READY FOR SCHOOL.

All you parents of four and five and six kids are shaking your heads at me and I am shaking mine right back at you because YOU DIDN’T STOP AT ONE KID EITHER.

It goes without saying that all of us love our children blah blah blah love love love, the dimension Marlo brings to our lives far outshines the chaos she brings to the morning routine. I absolutely adore having two girls and have never once regretted the decision to try to have a second child. BUT. Here. Let me do this: all you parents who decided to stop at one kid and have ever felt guilty that that one kid doesn’t have a sibling? Guilt serves no purpose in this world and it certainly didn’t ever get an almost five-year-old sister to put on her damn pants in the morning.