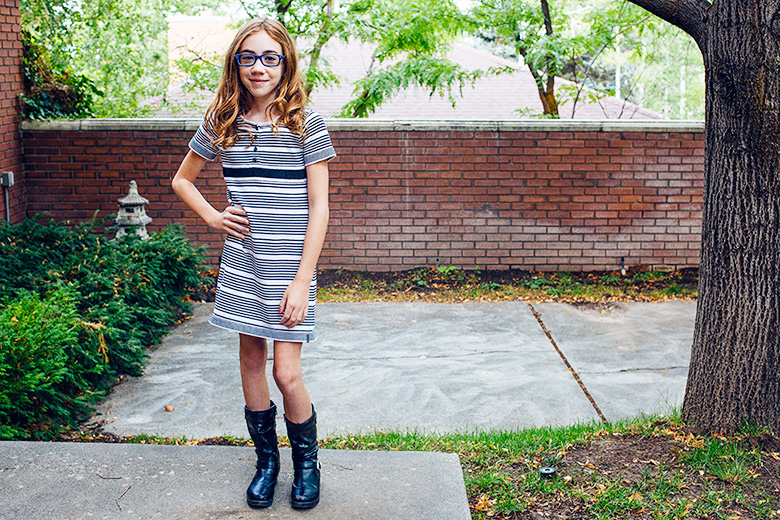 Despite the fact that both girls are attending the same school this year—TANGENT FORTHCOMING: one drop off? One pickup? Just one? ONE?! What… I mean… like… I just… In the days leading up to the beginning of the school year I daydreamed about what I would do with that extra time. I know it’s not a block of three straight hours, but when the most significant deficit in your day is time, 25-35 minutes is a lot. Do you have any idea what you could do with 25 minutes? You people who do not have kids or dogs, sorry, but your imagination is not nearly as evocative as those of us who do when it comes to this specific question. Put down your handcuffs and stilettos. Because in 25 minutes we could fly to Tahiti, take a detour to the moon, grab a tulip from a field in the Netherlands, and get back home with at least three minutes to spare. It’s a scientific fact.

I thought maybe I’d drop them both off and then use that extra time to park my car, hop out and make snow angels in the grass along the sidewalk. Sure, there’s no snow on the ground now, but shhh! That is just a technicality. It would be symbolic. A return to youth when time was not even a concept except in terms of measuring boredom.

“I have had nothing to do for ten minutes and life is awful.”

For some reason I do not understand why Leta started a week before Marlo did. I’m sure there is a good reason, and even if there isn’t I am in no position to argue with anyone. My kids attend one of he best public schools in the city, and I know enough teachers to understand that there are budgets and meetings and all sorts of things that have to get approval. Entire movies and whole seasons of television shows have been dedicated to dissecting this process in education, and my role in it is to make sure that I’m involved enough in their schoolwork to help them learn and excel as much as they can. And to roll down my window, lean out as far as I can and scream “WHO IS MY SUGAR BOOGER? WHO? WHO?” as my fifth grader walks toward the front door.

It gives her something to think about during those ten minutes when she has nothing to do.

On Leta’s first day of school we had a pretty calm morning because I had done a lot of preparation beforehand. The night before I had packed her lunch and inspected her backpack to make sure that she had all her supplies. I even helped her pick out what she’d wear and how we’d do her hair. I know I’ve said this before, but do you have any idea how much I want to play with her hair? When I was a kid I wanted to grow up and have a daughter specifically so that I could braid her hair and curl it and pin it up in a bun. We’d spend hours playing with curlers and hair dryers. I really didn’t consider any other aspects of parenthood like, you know, strings of sleepless nights and diapers and vomit and, you know, the possibility that my daughter might not want anyone to touch her hair.

Rarely does Leta let me do anything with her hair, so her first day of school was my Christmas. She let me curl it and style those curls with several different products. And then I got to move a few strands here and there, and I know that the word “squee” is one of those words people are so tired of hearing, so tired that they have written missives on the internet chastising anyone who dare type it. Guess what, those people? SQAAAAHHHH-WEEEEEEEE.

My heart squee’ed. It’s just that simple and beautiful and perfect.

Marlo was very excited for Leta, and as we all climbed into the car together she rattled off everything she could think to say about the playground and her teacher and how beautiful Leta looked. In the middle of her monologue I realized I had left my sunglasses on the countertop in the kitchen and quickly ran inside to retrieve them. As I took a step back into the garage I grabbed the door behind me to shut it not realizing how quickly it was coming at me, and suddenly I lost my eyesight for two seconds. Pain filled my entire body and began to expand like an inflating balloon. I didn’t know what was going on as an ugly, involuntary groan erupted from my face.

The noise I was making was worse than getting trapped in an elevator with a whistler.

I finally located the source of the pain in the middle finger of my left hand. It had gotten caught in between the door and the the doorjamb, and the resulting half-inch gash was spilling blood onto the floor. I almost sliced the top of that finger completely off.

Here’s the thing. Are you ready for the thing? Because this just makes no sense to me. Or at least it didn’t until someone explained it to me. THE THING: I have given birth to an eight-pound baby without drugs. I have run a marathon. I was once forced to listen to modern country music. I have and continue to live in Utah. I KNOW PHYSICAL PAIN.

I have endured some pretty awful, terrible, ongoing trauma. But this? This pain was unlike anything I have ever experienced. It was different. It was what I imagine it must feel like to get struck by lightning and live to tell about it. When I was relaying this story to a friend she explained that fingers and toes contain some of the densest areas of nerve endings on the body and provide the richest source of tactile feedback. Which is why when you stub your toe you involuntarily break every single one of the Ten Commandments in the two minutes that follow.

Leta hopped out of the car and came over to figure out what was going on. Later she would explain that she thought I was yelling at the dogs to get back in the house which is kind of funny given that whatever noise was shooting out of my mouth had scared both dogs inside. When she asked me what was wrong, the pain muffled my ability to pronounce words. Finger come out and “shfingah” and door came out as “muuuuaaahgggghhhrrrrrrr.”

I knew she wanted to be a little early to school and at that point we were cutting it close, so the part of my brain trained to deal with extreme physical pain kicked in. I pointed toward the car to indicate that she could get back in now, and when I got to the driver’s seat I grabbed a receipt for gas sitting in a cup holder and wrapped it tightly around the wound. A receipt. For gas. For 10 gallons at $3.47/gallon.

Could I have walked inside and grabbed something more helpful, say, a bandaid or even a paper towel. NO. NO I COULD NOT. We would be early, so help me god, and from now until forever I will always press “yes” when asked if I want a receipt after pumping gas. BECAUSE YOU NEVER KNOW.

Except now you do.

Watch your fingers and toes, the school year has begun.