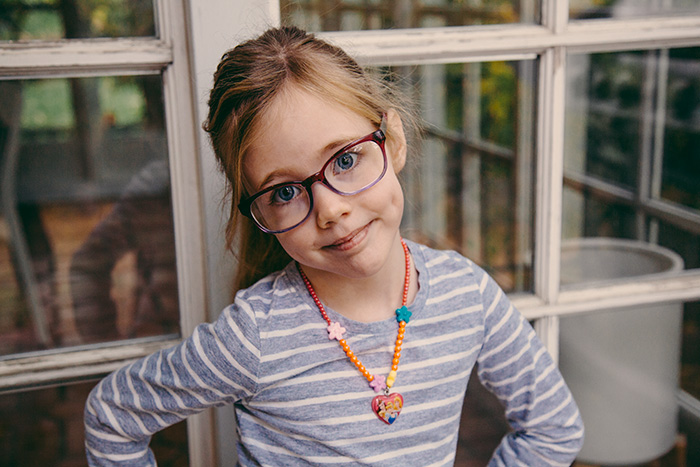 I wish I could conduct a survey before I get into the details of this post and ask what it was like for you if you were young when you first started wearing glasses. Because every single person I have talked to who was not an adult when they first looked through a corrective lens has some version of “I had no idea that trees were made up of individual leaves” or “I had no idea that bricks had edges” type of story to tell. It’s been astounding and at times sad, but across the board my friends have said, “Fuzzy was just normal.”

Over the last two weeks I have taken both girls to see an eye doctor—Leta because she had an eye exam scheduled, and Marlo because a test at school had shown that her current prescription wasn’t strong enough. Their father used to handle everything concerning their eyes because I haven’t ever had to wear glasses and am totally unfamiliar with the language and technology around the health of eyes. That whole world is completely alien to me. But circumstances have changed, and I have had to educate and immerse myself in this strange world of vision charts, phoropters, lenses, frames and having my children’s eyes dilated to the point that they look like huge fans of Phish.

I became a student of these doctors during these exams, asking as many questions as I could get in about certain measurements, technical terms, equipment and potential things to look for. Leta’s exam was mostly uneventful. She’d need a tiny bit more powerful prescription, and her left eye exhibits a small amount of Esotropia when it is covered up. Eso-whahhh? Yeah. I looked at her doctor and said, Explain like I’m five.”

Her doctor set it out like this: normal eyes tend to move slightly, almost unnoticeably outward when they are not being used. Her left eye turns inward. It’s nothing to be too concerned about now, but we’ll always check this tendency at subsequent exams. If he did not explain this correctly please do let me know and I will show up at the clinic, hand on my hip and go, “Do not make me get all Memphis on your ass.”

(Hat tip Kristen Howerton, although Kissimmee has such a better ring than Memphis.)

Marlo’s eye exam, however, was a totally different bowl of soup. First, there was this:

She did that for the entire 30 minutes the doctor was running late. Leta and I have memorized this and reenacted it together at least twenty times to different songs. And that’s the best part! Marlo was doing this TO NO MUSIC WHATSOEVER. Because she is brilliant.

When we finally got into the exam room, Marlo hopped up on the seat and performed like a champ. I had the doctor explain everything he was having her do and why, and noticed him scratching his head, blinking furiously and making an involuntary noise after almost every step in every different test. I thought it might be a tick of his when he finally said, “I’m going to need to do those first two tests over again. I’m just not sure these measurements are right.”

“Can you talk me through that statement,” I asked him.

“Well…” he said turning to cross one arm over his chest and place his chin in the hand of the other. “Do you know what astigmatism is?”

“I have heard the word used before, yes. However, explain like I’m five.”

Keep in mind that this is the kindergarten definition of things: this condition concerns the horizontal and vertical axes of the eyes, and when one axis has a different focal point than the other axis, things looked distorted or blurred. This can be caused by a cornea that has an irregular shape.

That’s when a light went off in my head. “There is a history of keratoconus in our family. Could that have anything to do with this?”

His eyes broadened, and as he took his chin off of his hand he did a one-take nod.

“I’m going to go get the head pediatric ophthalmologist to see if he can get the same readings I am.”

After performing two different tests on Marlo that head ophthalmologist confirmed what the doctor had measured in terms of astigmatism: kids who measure +1.5 or above in one eye are usually prescribed glasses. Marlo measures over +4.5 in both eyes.

When I asked if that measurement was alarming the head pediatric ophthalmologist explained, “With her current prescription she can’t even see 20/50 with her glasses on. A child her age should be seeing 20/30 or better, and the problem is that if we don’t start training her eyes to see things more clearly she could by the age of eight lose the ability to get any better.”

“Wait… what?” I blurted. “Good lord god, what I don’t know about eyesight. Sorry if you’re Mormon and that offended you.”

“That’s okay,” he said with a chuckle. “We see kids in here all the time who are what, 10, 11, 12? Kids who haven’t ever had an exam. And because we couldn’t get to them sooner we can only correct their vision to a certain point. We can’t correct it completely or even get anywhere near it.”

“Why does she try to take her glasses off all the time?“

“Probably because they aren’t helping at all,” he answered. “Why have this ‘thing’ sitting on your face when it’s not helping you see better? She needs to wear the right glasses all the time. Don’t let her wander around without them on. Here’s our plan of action: get this prescription filled, make her wear them, and then come back in three months and we’ll see how close to 20/30 she is. If we don’t like the amount of progress she’s making we might have to do alternating patch therapy.”

“You put a patch on one eye for a few days to strengthen the other, then you switch eyes,” he explained.

“My child will be a pirate.”

“Your child will be a pirate.”

This prospect may prove a little too inciting for my child.

I will cut through the more tedious parts of this story that deal with driving down to the mall, choosing frames and having their heads measured—wait! I took a free eye exam and it showed that I still have 20/20 in both of my eyes! They’d very much like me to pay for the more thorough exam, and at some point I will, but Mama may have done an embarrassing moonwalk right there in the middle of the store.

Because Marlo’s astigmatism is so pronounced for her age they offered to make her a temporary set of lenses so that she could see while her other ones were being made (they usually take from seven-ten days to manufacture them). I picked them up the following day, and when Marlo put them on she acted as if she had been stung by a swarm of bees. She couldn’t get them off of her face fast enough.

“I HATE THOSE GLASSES!” she screamed.

“Wait, what? I asked. “You loved these frames in the store yesterday. What’s wrong?”

“They fall off my face and move around and they don’t feel good AND I HATE THEM!”

I held my breath and imagined the uphill battle ahead of me. Would I need to go back and have her try on a different pair? Did they measure her head wrong? Was she just being stubborn? An hour later I decided to try one approach before giving up. I asked her to put them back on so that I could take a photo, and if she would keep them on for 20 minutes she could have a treat. When that 20 minutes had passed she was on the couch flipping through the pages of a book, totally enthralled and having forgotten my bribe. She didn’t take them off until she went to bed four hours later.

The next morning she woke up and the first thing she said was, “Where are my glasses?”

It’s been three days and she has only taken off her glasses before going to bed each night. You guys, fuzzy was normal to her. Seeing clearly freaked her out.

My baby girl can see now.