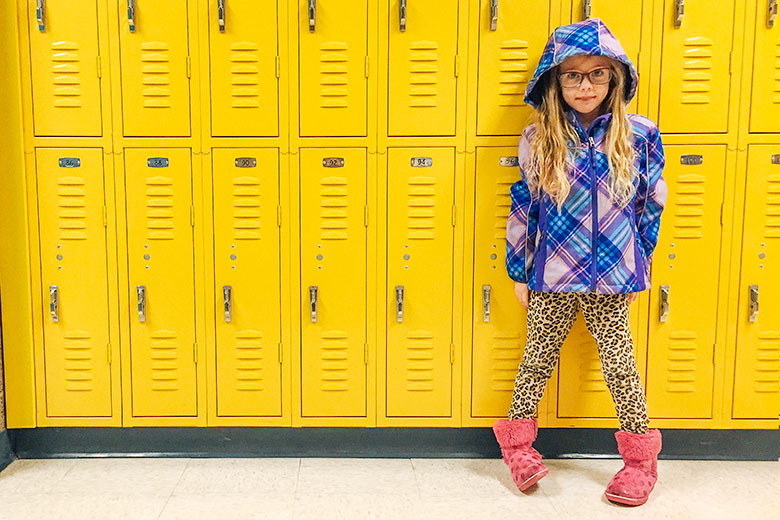 The girls and I have our morning routine down to a fine science, one with moving parts that are at times heavier and not as well-oiled as others. It starts when my alarm goes off at 6:30 AM, and every morning when I turn over to hit snooze I have the exact same thought: “Really? Really?”

Yes, it’s an exasperated thought, and maybe you have more of a leaping lily of a personality where you wake up before the alarm, rush to the window and greet squirrels with a kiss. I’ll high five those squirrels at night, for sure, but in the morning I would gladly shove them off of the ledge.

Usually that exasperated thought is followed by a somewhat more positive one: “Oh, thank God she slept through the night again.” And then I’ll sigh and fall right back asleep for another nine minutes. Marlo very rarely wakes up in the middle of the night anymore, at least not until she got the stomach flu a couple of weeks ago. That illness blew a two-and-a-half month record to bits, and I’ve slowly been getting her back into her rhythm. Meaning I have had to tighten the bungee cords that strap her to her bed.

I hit snooze twice, a delicious 18 minutes of alone time where I prepare myself for the onslaught. There is this looming sense in the morning that we’re on this hamster wheel, you know? Does that make sense? Like, are we seriously right where we were yesterday morning about to do the exact same things we did? But by bedtime that apprehension has transformed into a feeling of victory. We DID do the exact same things we did yesterday! TAKE THAT, THINGS.

I usually have to wake Marlo from a sleep so deep that all of her covers have been kicked off and she’s lying across her entire twin mattress like a starfish, mouth wide open. I have to wake Leta from an even deeper sleep, but instead of her covers being thrown off she’ll be tangled up inside them, limbs jutting out from knots she has tied from spinning circles around her bed in her sleep. They both sleep like water in the sense that if there is a space in their bed to fill, by god, they will use their body to fill it.

Marlo usually helps me get the dogs out of their crates and pours a scoop of food into their bowls as Leta makes her way downstairs for breakfast. I knew this day would eventually come, but wow, there really is such a delicious sense of payback when the child that woke you up at 5 AM for how many years? A lot of years. So many years. When that child wearily wipes the sleep from her eyes and complains that she couldn’t possibly be more tired, it’s very hard not to steeple my fingertips and order Smithers to release the hounds.

Yesterday morning I must have been thrown off by the rain outside, the rain in December, the rain that should have most certainly been snow, and have I ever been that happy to see rain? I don’t think so. My idea of heaven is a desert wasteland where temperatures reach over 300 degrees and I get to sweat for hours on end and then take a hot bath. You could say that my older dog takes after me quite a bit in his affinity for heat and being a moody, miserable fuck.

I saw that rain yesterday morning and was so elated that it wasn’t snow that when we went back upstairs to get dressed I forgot myself. I veered from the routine. I normally enter Marlo’s room first, open her drawers and pull out the clothes she’ll wear for the day before opening the door to the bathroom between her room and Leta’s. But I forgot the step where I grab her clothing and opened the door to the bathroom first.

I was lost in a kind of weird, dream-like reverie about the fact that I wasn’t digging out from three feet of snow (YES I AM AWARE OF THE GLARING PRIVILEGE IN THAT STATEMENT) when I turned around and watched Marlo throw her body onto her bed.

“What…” I started to question.

“Mom!” she yelled as she threw her hands into the air and then let them fall dramatically to the bed beside her, indicating that she was almost too exasperated to address this in any way. “Are we going to get this done or what?!”

Are we going to get this done or what.

My five-year-old, so thoroughly frustrated with my lack of following through with protocol. Before you judge me, remember that the other one I raised was deconstructing Shakespeare at her age and negotiating peace treaties between warring nations.

Later Marlo would continue her verbal critique of my job. We were waiting in the car for the bell to ring, the noise signaling that it was time to walk her to her classroom. It was pouring rain outside, sheets of water falling from the sky, and we were as usual a bit early and playing with the windshield wipers to pass the time.

“Mom, I really want to go inside,” she insisted.

“Marlo, we’re still really early. Do you want to wait for several minutes inside the door?” I asked.

“YES. THAT IS EACTLY WHAT I WANT!” she responded not at all enthusiastically.

“Okay…” I said, and then wrapped my scarf around my neck one more time.

“I don’t, no. That’s why we have to walk really quickly into the building,” I explained.

“Whoa,” she said as she put up her hands and flashed her palms as if to indicate “slow this shit down a bit.” I shook my head as if I did not understand and looked her directly in the face.

Not sure you can handle this.

I repeated that back to her and then asked, “You don’t think I can walk into your school while it’s raining?”

Book smarts and street smarts. I gave birth to both.