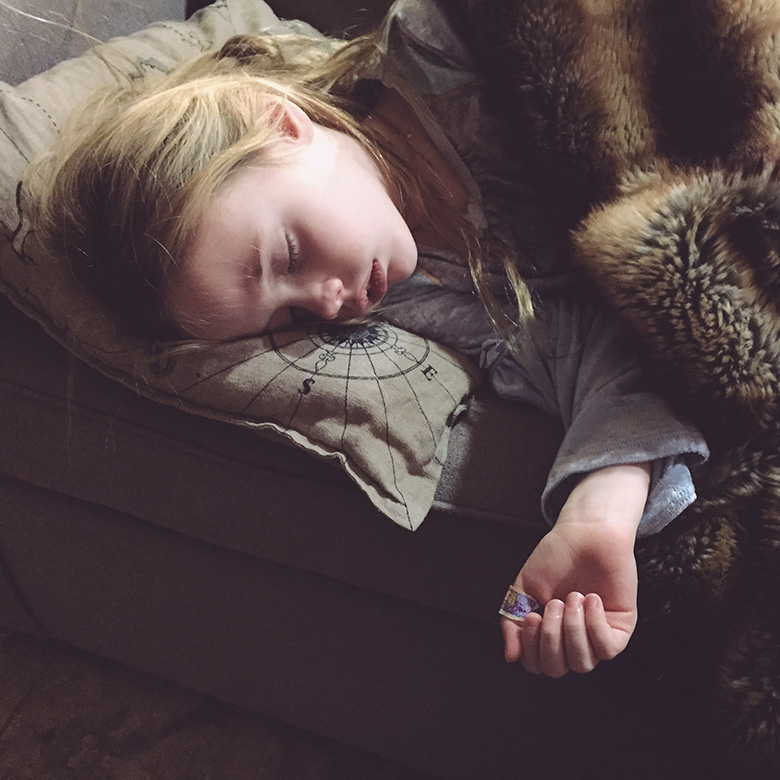 Yesterday at around noon I got a call from the secretary at the front desk of the girls’ school letting me know that Marlo had come to the office feeling under the weather. She asked if I’d like to speak to her, and when I said yes I heard her hand over the receiver and say, “No, you hold that part to your ear. That part, Marlo.”

If it doesn’t look like a cell phone how on earth is she supposed to know how it works?

“Mom,” she finally said into the right part of the phone. “I have a terrible headache, and when I take off my jacket the cold keeps coming in.”

“The cold keeps coming in?” I restated more than asked because I wanted to remember it for a nihilistic poem I will eventually write that will win awards.

“Yes,” she answered without any of her usual fervor. “It swooshes in and in and in.” When I told her I would be right over to pick her up she immediately blurted, “I love you.” Something was horribly wrong. Marlo does not usually end a conversation on the phone with any salutation. Never a “goodbye” or “talk to you later.” Instead, she just drops the phone. When you hear the thump as it hits the floor you know she’s done talking.

When I retrieved her from school she was lethargic and silent, signaling one of two things: she was either sick or possessed. We’d spent several hours the night before at InstaCare to investigate a sore on her thumb, and when the whole experience was finally over and the doctor did not cut off her thumb she celebrated with elaborate song and dance and would have bought everyone at the bar a whole round of shots. When we walked back out into the lobby from the exam room she stood in the middle of the floor where everyone waiting could see her and dramatically wiped the invisible sweat from her forehead.

“PHEW!” she yelled. “HE DIDN’T SLICE OFF MY FINGER!” As I ushered her toward the exit I turned around and made several physical gestures to the startled audience to indicate that surgical removal of her finger wasn’t ever an option. I don’t think anyone there believed me.

Lethargy is not Marlo’s idea of a good time. Fucking shit up? That’s more her speed.

When we got home from school she sluggishly climbed into a ball on the couch and remained inert and burning hot for several minutes before she looked over at Chuck. He was lying in one of the dogs bed on the perimeter of the living room gnawing on an antler chew I had bought both dogs as gifts in New Mexico. She sat up, blinked several times and even took off her glasses to rub her eyes.

“He’s not hurting the reindeer is he?” she asked on the verge of tears but too weak to actually cry.

“Hurting the reindeer” would be one of many wonderful things to come out of her mouth for the rest of the afternoon, throughout the night and all the way up until her fever finally settled down at 5 AM this morning. Other expressions included:

“They are stopping the yawning!” I could not get her to identify who “they” were so I assumed she meant the Republicans.

“P-O-P spells ‘reading a book.’” Leta was asking for dessert and was in the middle of spelling popsicle in case Marlo wanted one and wasn’t allowed to have one.

“My nose isn’t blowing.” This is probably a pretty common one with kids who get confused about the mechanics of things, so I gently explained that she had to blow her nose in hopes of helping her to remedy the situation. I knew instantly that her fever was coming down when she blurted, “STOP ARGUING WITH ME!”