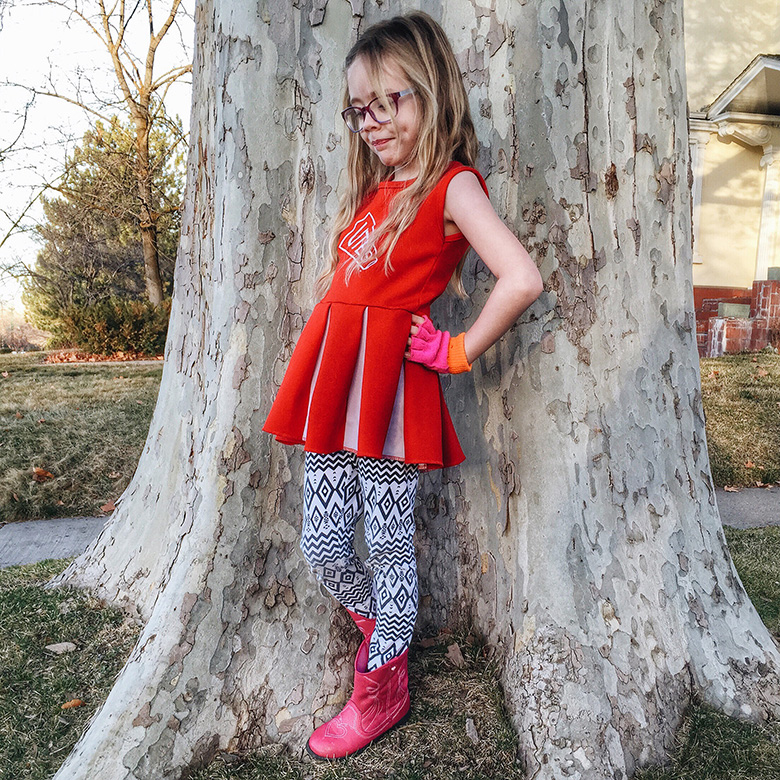 Every morning last week Marlo would take a bite of her waffle at breakfast and ask with a mouth full of syrup, “Is today St. Patrick’s Day?” And when I’d tell her that it wasn’t until the following week she’d let out a huge sigh, one so dramatic that you would think that she’d just been spared a death sentence.

“Okay, phew!” she’d say while wiping imaginary sweat from her forehead. “I haven’t picked out what I’m going to wear yet!” If there was any question as to whether or not this kid is the granddaughter of the Avon World Sales Leader, we just cleared that up.

She’s so very different from her sister this way. So very different from me, even. That gene in my mom that makes her apply lipstick before walking outside to retrieve the mail skipped right over me and landed squarely inside Marlo, a five-year-old who is at her happiest when allowed to change outfits at least four times a day, a five-year-old who is very picky about which pants she wants to wear with which shirt, and when parents at school give her a crazed side glance like WHAT IS EVEN GOING ON, I want to explain, “Southern. Her lineage is Southern.”

I mean, look at this. All her right down to the gloves:

Leta on the other hand doesn’t even look at what she’s grabbing out of her drawers, some random pair of pants, whatever shirt is sitting at the top of the pile of folded shirts. She doesn’t care as long as it fits. Right now she’s a little frustrated because all the pants I bought in the fall and had taken in at the waist are now only four months later hitting her about two to three inches above her ankle. She’ll point toward her feet and ask/scream, “What is happening?!”

What is happening. Oh god. She wasn’t ever supposed to reach this stage in her life. She was always going to be a little kid and I’d never have to explain what an “underwire” is. This makes me want to call my mom and ask her how in the hell she survived it when a boy broke my heart and I discovered The Cure.

(If she has a voodoo doll named Ryan that she regularly pokes in the face I am so going to forgive her for forgetting my 24th birthday.)

“Leta,” I’ll answer. “It’s called ‘growing’ and it happens to everyone.”

“I know what growing is MOM. But there’s NO WAY I’ve grown this much.”

“You’re right,” I say as I close my eyes and nod. “I’ve been secretly shrinking your pants because getting both of you ready and out of the house in the morning wasn’t chaotic enough.”

On Tuesday morning I walked into Marlo’s dark room, sat down on her bed and started lightly scratching her back like I do every morning to ease her awake. Usually she mumbles, “Scratch harder,” or, “Keep scratching,” or, ‘When you’re done scratching my back scratch my arm.” One day that kid is going to sell more Avon product than anyone else in the world.

But on Tuesday she sat straight up when I sat beside her and blurted, “Are leprechauns real?”

5-yr-old: Are leprechauns real? Me: No. 5-yr-old: So they aren't hiding under my bed? Me: No. But monsters? Probably.

She really was scared that one might be hiding underneath her bed, and that instantly reminded me that Leta was terrified of leprechauns when she was this age. WHAT THE HELL ARE THEY TEACHING KIDS ABOUT LEPRECHAUNS IN SCHOOL ANSWER ME. What is happening?! I don’t ever remember being afraid of a damn leprechaun. I mean, they make delicious cereal with colored marshmallows! They have gold! They are teeny tiny and can fit in your pocket like a gummy bear.

Wait… let me google…hm… OH DEAR: “Leprechauns are a type of fairy, though it’s important to note that the fairies of Irish folklore were not cute Disneyfied pixies; they could be lustful, nasty, capricious creatures whose magic might delight you one day and kill you the next if you displeased them.”

Listen, whoever is teaching this to my five-year-old, I want you to meet me face to face so that I can high five you.

She chose to wear a green dress and several green barrettes in her hair, whereas Leta grabbed a T-shirt that had words printed across the front in several different colors, one of them green. I wore no green at all and subsequently suffered several pinches from the backseat on the way to school. A certain someone found leprechaun footprints in her room later that day DON’T KNOW HOW THOSE GOT THERE.