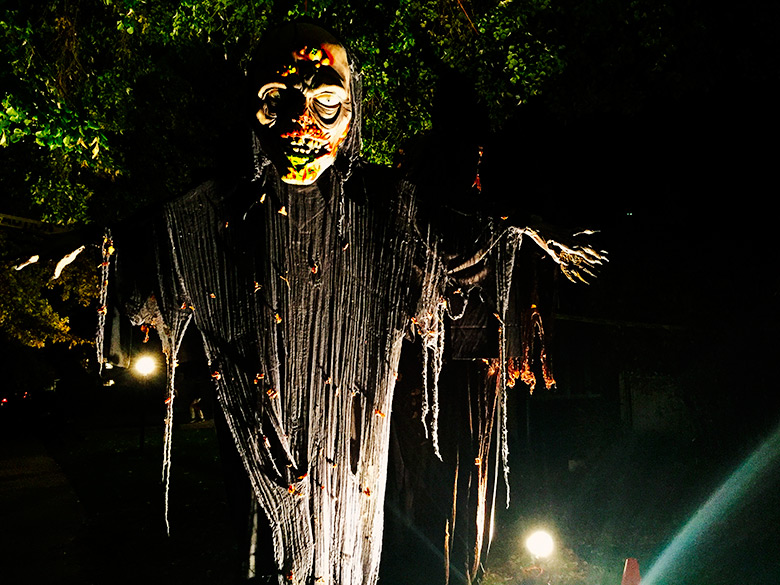 Saturday night the girls and I continued our annual Halloween tradition by celebrating with friends Lola and Gigi and their parents Ivy and Josh. I suppose I should use the term “celebrating” loosely since this is probably my least favorite holiday (which I touched on a little bit here), and should change that to say “we are going to make it through this fucking night alive so help us god.”

Sure, kids are cute in costumes. Wait, nope. I’m not even going to pretend to be enthusiastic about that. Because a lot of customs are super half-assed (a white wig and mustache do not transform you into a very convincing Einstein, CADEN), and the ones that are not make me hyperventilate thinking about the amount of work that went into their creation. Like, I was watching elaborate step-by-step Pinterest boards walking the streets that night. I calculated over 70 years of time that went into costume-creation that could have been spent on something more important like, oh, I don’t know, watching reruns of “Welcome Back, Kotter.”

“I’d do the very least I could to help dismantle white privilege except I’m a little busy over here getting the dress on this goblin to hang just so.”

Yep. I am an unabashed scrooge about Halloween, but that does not mean that I don’t try to make it as fun for the kids as possible. We trick or treat for hours in costumes, and I let them eat a shit ton of candy. It’s just what parents do. I don’t like having to stand behind Leta every afternoon to make her play certain sections of her concerto over and over again in preparation for her performance next week, BUT I DO IT ANYWAY. You want to know why? Because I am a kick ass mother. Because I’m really fucking good at this. Because I am a parent who shows up.

First, I have been doing this for… how long? Almost 15 years. Yeah. That long. My website could get a drivers’ permit, y’all. How scary is that? There are probably a handful of websites you could think of right off the top of your head which if anthropomorphized would be the most horrifying drivers, and you’re going, “Holy shit, I’d much rather be in a car with TMZ behind the wheel than dooce.com.”

I AGREE WITH YOU.

While I’m on that tangent I’ll just go ahead and admit that I am a pretty aggressive and punishing driver, and ATTENTION RESIDENTS OF SALT LAKE CITY: anyone who tries to make a left turn ANYWHERE on South Temple deserves to be followed home and have the golden trumpet of the angel Moroni shoved straight up your butt.

POINT IS: how long have people been saying to me, “Oh, you’ve crossed the line this time, Heather! UNFOLLOW!” Or, “NOW you’ve gone too far, UNSUBSCRIBE!” Turns out people have been saying that for a really long time. The entire time, in fact. And you’d think that people would realize that the number of lines I have yet to cross and will eventually jump over while wearing absolutely nothing except pasties that are shooting fire is endless. Gleefully crossing lines is the shit I’ve been peddling for 15 years.

But they don’t realize this. And by hating Halloween I have finally, FINALLY AFTER ALL THESE YEARS, gone too far:

ME! I’m the one who brought the pooper to the fun party. And I do believe that this comment is one of those instances that deserves this photo in response.

Someone else told me very recently that they are not ever going to read my “blog” and they hissed when they said it and gave it an inflection that made it sound like Hepatitis C. So, you’re not going to read my blog. Hmm…

Second! This here bringer of the pooper to the fun party experienced what was by far the most enjoyable Halloween as a parent. The best one. And I know exactly why. I can pinpoint the exact reason, and you are going to want to know right the fuck why. Because it didn’t have anything to do with neon fireworks or Anglo-Saxon Jesus descending from the sky or a giant hole opening up and swallowing everyone dressed in a costume, burping in satisfaction afterward.

In fact, Marlo refused to wear half of her costume and complained that her legs hurt the entire time we roamed the neighborhood. I didn’t care at all because I was right there in it. I was living it to live it. I didn’t have to stage photos of my kids or dogs (I’m still not over my grief, so that stays plural for now) in their costumes that I’d need to post online. I didn’t have to take mental notes the entire night for a recap of the experience I’d have to write in order to maintain page views. I was not thinking about CONTENT CREATION and it was fucking glorious.

Did I post photos that night? I did. I certainly did. Because I wanted to. Not because it was required as a means to pay my bills. The sense of relief and freedom I felt almost put me into a coma.

I am constantly taking photos and videos with my phone now. It has very quickly become my favorite pastime, and my friend John wrote a piece for Slate that really gets to the heart of why I document my life like this:

At this point, some helpful person will point out to all of us that our experiences with our children are to be lived in the moment, so stop trying to photograph them. But it is possible to live in the moment and photograph it. Experience is not limited by the search for the photogenic. The fellows who were able to capture the moment at Rouen Cathedral in the daylight and Saint-Rémy-de-Provence at night almost certainly felt those moments deeply as they were taking place. They couldn’t have created those images otherwise.

I have found that since I have stepped back dramatically from this website that my desire to document my life in photos has increased tenfold. And I know it’s because the joy in doing it has been restored. I also see other people online who are headed straight into the arms of the monster who crushed that joy, headed for panic and frustration and burnout because the living of their life has been commodified. The living of their life has been filtered down into the number of unique visitors. And I’m not saying that living that way is wrong or bad. But I am testifying that not living that way has intensified every color that fills in the lines of the world around me.