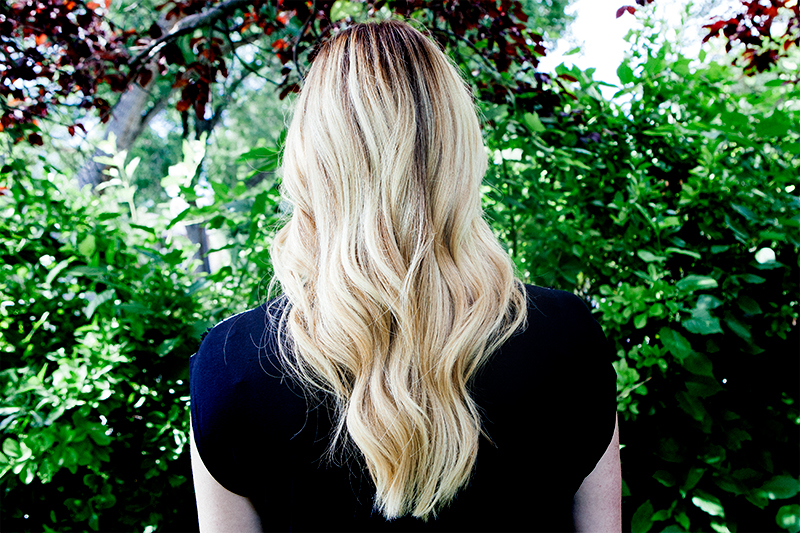 This post is in partnership with 2-Minute Club who is offering $20 Off + Free Shipping on Pura D’or shampoo and conditioner system with code DOOCE.

At the age of five after my family moved across town into a different school district in the middle of my kindergarten year, my mother promised me that if I would go two weeks without crying all day for hours on end that she’d reward me with my first trip to a salon. This may seem like an odd reward for a five-year-old to anyone who is not from the South, but the fact that I was born in Tennessee and didn’t come out of the womb wearing a crown and a custom pageant sash completely demolished my Apgar score.

Somehow I made it two weeks without crying, and maybe that’s what I should have offered Marlo three years ago when her abandonment issues prevented her from any semblance of a normal drop off at school. Instead of spending $130 a week on therapy sessions I should have said, “How about we hit up a salon where someone who has never seen your hair and should not be working with hair at all whatsoever will cut if off within an inch of your scalp. And in the following months as it grows back in random patches resembling stainless steel scouring pads, we can use your head to scrub toilets.”

Because that’s exactly what happened to me. And I felt better!

That was the first time we realized what we were dealing with in terms of my hair, that things were complicated. It was abnormally thick around my scalp, a bit thinner at the ends as it grew out. I would scream for hours as my mother attempted to brush out the knots that had formed during the night as I slept. As I got older, it developed a tight natural curl, except it was nothing like a scene from Felicity, no. I looked like a kid who’d been passed off to live with a distant, depressed aunt who would dress me each day according to her obsession with Bob Ross.

I let it grow out to my waist in high school knowing I could use it as an impenetrable curtain behind which I could hide my face and crippling insecurities, one of them being the giant mop of curls jutting out from my head. People knew me by my thick curly hair which in no way diminished that they also knew me as the scowling prude who would openly pout at any grade less than an A+. I was super fun at all the parties I didn’t get invited to.

I embraced the unique nature of my hair by the time my grades earned me a full scholarship to college—pout on high school prudes! save yourselves years of unwanted debt!—but by the time I ended up in Los Angeles the curl started to ease up. I still had thick hair—so thick that when I started earning money and seeing a stylist on the regular she would invariably say, “Your hair is so deceiving. I keep thinking we’re almost done and then there’s more and more and more.”

By the time I’d moved back to Utah the tight curls had all but disappeared. My hair still has a natural wave and texture to it, but those amazing, luxurious curls I had detested in high school had become a distant memory. Stop pouting high school prudes! One day you’re going to grow old and die!

Which brings me to now. Some women lose a lot of hair right after they have a baby, and there are a lot of explanations for this, all of which you should not google. Stop. Don’t do it. PUT DOWN THE MOBILE BROWSER, BRITTANY. This is perfectly normal, and if your partner steps into the shower, sees a giant wad of your hair in the drain and makes a joke about a gorilla, you are allowed to flush the toilet right as that person puts their head underneath the water.

I didn’t ever lose hair this way, but my hair now in my forties has lost a lot of it’s natural texture. I’ve also had several consultations with the stylist I’ve been seeing for over ten years because parts of my scalp have lost a lot of thickness. She once suggested I see my doctor to check out my hormone levels, which I did. But my doctor also said, “You’re how old?” She didn’t need to say anything else. Once you start receiving that yearly reminder to get your mammogram you’re suddenly well aware of the side effects of mortality.

A couple of months ago the people at 2-Minute Club asked if I’d like to try out their Pura D’or line of shampoo and conditioner for hair loss due to breakage and hair loss prevention. And I looked over my right shoulder, and then my left, and then silently whispered to myself, “But I am not one of the very bald men in Utah I have dated?” I did think about the loss of thickness around my scalp, so I looked at what this product could possibly offer me.

Three weeks ago I started the Gold Kit that is specifically formulated to regenerate and revitalize hair follicles at the scalp. It uses 17 key ingredients to do this, none of which are chemicals. In fact, it contains no parabens, is hypo-allergenic, cruelty-free, MADE IN THE USA SING IT LEE GREENWOOD, color safe, and. Best of all. Y’all. It’s gluten free. It fits within your diet although you probably shouldn’t pour this in your kale salad. It does not say, however, if it will fix you a piece of artisanal avocado toast.

Because it doesn’t contain harmful chemicals it’s also perfectly safe for for new mothers, so you can pair this with the gummy vitamins you’re stealing from the older four-year-old. It takes about three months to start showing is most significant results. In fact, after an eight-week clinical study, nine out of every ten users noticed measurably improved volume to their hair. You’ll start to see thicker hair returning just about the time your baby can grab and shake a toy. So, be warned: they can and they will yank that thicker hair right out of your head.

This formulation (there are two others, the Blue Kit and Pro Kit, all with a combined 13k reviews) is great for thinning hair (kind of a check mark here because I don’t have a receding hair line, but the loss of thickness around my scalp is noticeable to me), frizzy hair (check mark here when I visit humid climates), hair loss due to breakage (CHECK TO THE MARK), and distressed hair (DING DING DING). If my hair were a person you would stop answering its text messages because every single one of them would be the distressed face emoji surrounded by a whole bunch of misspelled words. You have that one friend. You know what friend I’m talking about. And someone needs to be the Solange in that relationship and take that friend’s phone away.

Turns out stress is just as bad for the health of your hair as it is the health of every other part of your life, and every time (which means all the time) someone sees me pull stray hairs out of my mouth or off of my clothes or, god forbid, out of a plate of food, I explain, “Marlo did this.” She didn’t put it there, no, but she arranged for it to happen.

The things you have to think about before you decide to have children now include, “How embarrassed am I going to be when I pull a strand of my own hair out of a bowl of someone else’s tomato soup?”

It’s only been three weeks, and while I can’t tell a difference around my scalp just yet, I’ve noticed a total change in the texture of my hair. It feels less limp right after I wash it, less wispy after a blow dry. This means I have to use fewer styling products to give it that texture. 2-Minute Club would like to offer you $20 Off + Free Shipping on Pura D’or shampoo and conditioner system with code DOOCE.

(Please note that this is a subscription but you can cancel at anytime without any commitments or fees.)