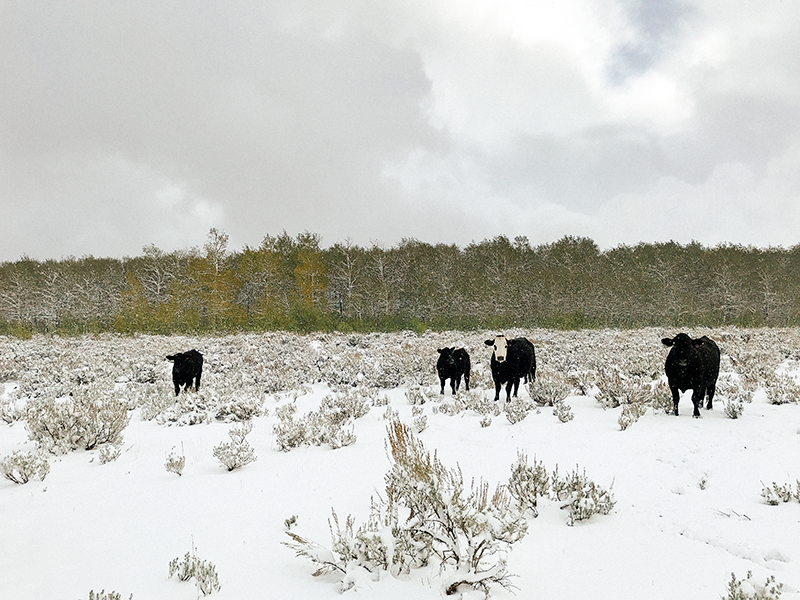 This isn’t another post about farming or agriculture, and I don’t think this will elicit as much hate mail as I got for wanting to get pigs out of confinement. But who knows. I have a knack for pissing people right the fuck off including one very specific crossing guard who sees me coming on the drive to drop Leta off at school and deliberately walks out in front of my car and holds up the stop sign EVEN WHEN THERE ARE NO KIDS IN THE CROSSWALK. Note, this is at a crosswalk, not a four-way stop. I have no idea what I did to make her so angry as to recognize my car, but Leta watches this happen every morning and laughs so hard about it that Marlo feels left out of the joke in the back seat. I’m furious, Leta’s laughing, Marlo’s pouting, and at some point I’m going to get out of the car, walk over to her and whisper in her ear, “You smell like an infected vagina.”

But would you look at these cows.

They’re looking at me like, what the fuck, Armstrong. It’s September and there’s almost a half a foot of snow the ground. You did this.

I’m not going to lie. Waking up to this after sleeping in a cabin on a ranch in central Utah at an elevation of 10,000 ft. was breathtaking. I simultaneously wanted to hug the entire earth and punch someone in the throat. You thought I was going to say balls. Stop trying to predict me.

Seeing that much snow this early in the season elicited a piercing wince because of what a nightmare the snow in Utah has been like over the last two years. At the old house I had to start paying a service to shovel my driveway after several failed attempts to find a teenager who would want to do it for a reasonable price. Maybe earn an extra few bucks to buy some weed? I wouldn’t tell his parents. Or Leta. Oh my god. Do not tell Leta that you have smoked weed. Like, keep that shit to yourself because her 7th grade health class spread the horrifying propaganda that once you smoke your first joint you might as well just call it because you’re going to end up homeless and dead from a heroin overdose. After you’ve stolen a car to drive to a Greek restaurant to murder your nemesis and his girlfriend who’s missing seven teeth. While littering the air with the most horrifying and lewd words in the English language. MOIST ORIFICE DISCHARGE MOTHERFUCKERS!

We were driving home from piano one night when she told me about this drug and alcohol chapter they’d been studying, and when I pulled into the garage I said, “Leta, marijuana is legal in several states. People use it for very good and helpful reasons all the time.”

“Yeah, I know, but when you don’t have a reason…” she trailed off into a 13-year-old Heather B. Hamilton thought of, “I am not ever going to smoke a joint because so far being alive and not homeless and not dead is working out for me.”

“Your father and I have both tried marijuana,” I explained. “Most adults have at some point in their lives. I’m sure that the parents of your friends—”

She was totally serious.

“Well, I got so paranoid that I certainly thought the cops were on their way!”

I guess you could say that I don’t bring this up with her anymore given that for at least an entire day of her life she thought the Salt Lake City police were going to show up at my door and cart me away in handcuffs for the joint I smoked when I was 25 years old and living in Los Angeles where one of my bosses routinely snorted cocaine off of his mousepad.

I had sex with a coworker one time on top of that desk. Leta is going to lost her shit when she reads this.

I think that was a tangent. Don’t worry! I’m on my meds! My podcast is called Manic Rambling Spiral for a reason!

A couple of winters ago I wanted to pay a teenager a practical amount of money to help me keep my driveway and walks clean during the winter but I couldn’t find one. And every independent company I called was booked for the season. So I had to call Satan’s Army and hire them to help me with the insane amount of snow that dumped itself in front of my house, and in December 2015 I wrote them a check for snow removal that was equal to my fucking rent.

Same thing happened last winter. I was just writing ridiculous checks to this company who charged me every single time they came out to shovel the snow. Sometimes they’d come FIVE TIMES during the course of a snowstorm, and then they wouldn’t even show up for the next one. You’re sitting there shaking your head going, “Why didn’t you just shovel the damn snow yourself, you asshole.”

I owned a professional-grade tractor snowblower, and my stepfather almost killed himself once trying to remove snow from my driveway that slanted at a 45° angle. I tried using a regular shovel once and it took me over three hours to try to remove a foot of snow from all my walks. I’m checking my pockets and purse here, and shucks. I don’t have three free hours to shovel snow every time it snows, do you? Do you have three extra hours in your day? You do? Can I borrow them? Because I’d like to smoke some weed and get arrested but I’m too busy raising kids by myself and earning money to pay for health insurance.

All these pre-existing conditions don’t heal themselves.

Oh, and I don’t know if I ever talked about this, but the day that I rented a truck to move all my furniture to this new house? It snowed 18 motherfucking inches. We couldn’t even get the truck up the road to my house, let alone into my driveway. Oh wait, I reference it in this Instagram post:

Day four of the move and I have a genuine smile on my face because meds. Five carloads packed and unloaded today in the middle of another snowstorm (?). Tomorrow we clean, and once the the piano makes the treacherous journey to the new place we can pour my mother and stepfather a giant shot of whiskey. Those motherfuckers make me want to believe in god, and I will never be able to thank them enough for sticking it out through this whole ordeal. We love you, Linda and Rob. ❤

Still on those meds!

All of this to say, I appreciate the beauty that is snow and Utah and the combination of the two and how I am free to move away someplace warmer, no one is stopping me, so shut up already. I just had this thought when I saw those cows, like, yeah, dude. I get you. You get me. Let’s cuddle before you are shipped off to be eaten by humans.

See that knack? I’ve got the knack. You’re totally jealous of that knack. You only wish you got email telling you that you should die of cancer. Which I will most certainly get if I consume meat, so everyone in this scenario is happy. You’re welcome.