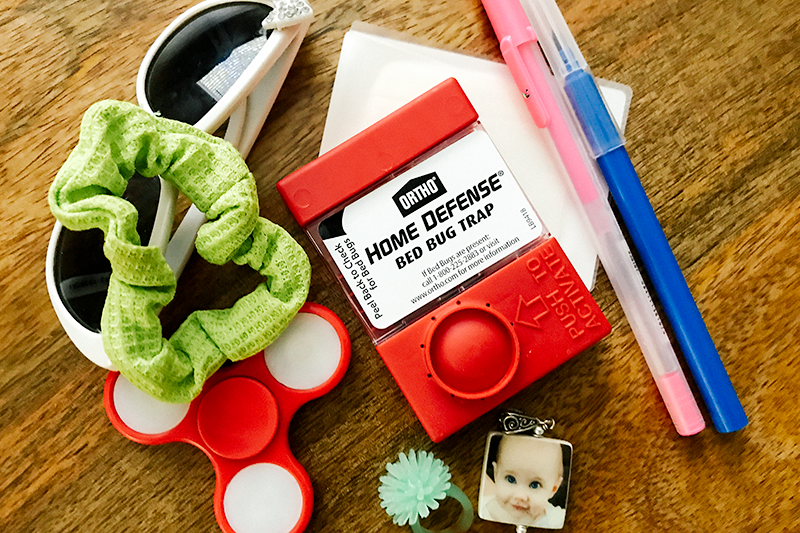 This post was sponsored by Ortho Home Defense but all opinions are my own.

A few days after I returned from Paris, my neighbor knocked on my door with one hand while gripping at his hair on top of his head with the other. He was frustrated, beaten down almost, and he just stood there shaking his head. When I asked him what was wrong he said, “This rat problem is more than a one man job, Heather.”

There are worse ways a neighbor could start a conversation with you. Offering to show you a belly button lint collection comes to mind. But that was one of the more startling interactions I’ve had upon opening my front door, and it only got worse when he told me that he’d seen one walking along the fence between our yards. And it was as big as a cat. A very well-fed cat.

Since moving into this house we’ve seen our fair share of spiders and what’s called a Boxelder bug—don’t google that because we had an infestation in the back yard so big that it looked like a giant, swarming black hole of death. Then came the rats, and even though I bought a huge package of traps and set them all along the fence the only thing I caught was Coco’s curious, peanut-butter seeking snout. She’s fine. She only cried for a week. It’s just a flesh wound.

Then came the moths, and in the middle of the night about a month ago Marlo appeared at the side of my bed and announced in the most eerily calm tone, “There is a moth as big as a bat in my room.” Oh. You don’t say.

She was not exaggerating or frightened. She was more annoyed than anything else, and the two of us chased that thing around her room as it darted in zigzags leaving huge dents in the drywall—this scene stars two lanky, long-limbed maniacs running around in pajamas with tangled masses of hair on top of their heads, both of them brandishing a strappy sandal as a weapon—until I finally cornered it, apologized for the murder I was about to commit, and ended its life in dramatic fashion all over the self-portrait Marlo had painted of herself in second grade.

“We can pretend that when you painted this you’d just spilled coffee all over your face or grew a beard,” I said in the fog and hysteria of four o’clock in the morning.

And then a couple of weeks ago Marlo woke up with a giant, round welt on the back of both legs, one on the back of her knee, the other on her calf. And they itched like crazy. They didn’t look like any bite I’d ever seen before, and because she didn’t have a fever I sent her to school with some anti-itch cream, shrugged, and hoped her legs didn’t fall off during math.

That’s when I remembered that someone last month had sent me an email about a new bed bug detector. I found the email and said, “Hi. Hello. Hey there. You still there? Yes. Yes! I would love to work with you. Sorry for the late response, but I had to deal with rather large, well-fed rodent WALTZING LAZILY ATOP MY FENCE.”

So they sent me what’s called the Ortho Home Defense Bed Bug Trap which offers an easy-to-use, first-of-its-kind way for regular consumers to detect bed bugs. Have you ever read the bed bug horror stories? No? THEN DO NOT GOOGLE BED BUG HORROR STORIES. Heed that warning. There’s a statistic from Ortho that reports 58% of Americans would rather be naked in public than have bed bugs AND I AM AMONG THOSE VERY SMART AMERICANS. The Ortho Survey was conducted by Wakefield Research among 1,000 nationally representative U.S. adults 18+, between June 28 and July 5, 2017. Those two welts on Marlo’s legs brought back all of the imagery of one horror story that has this piece of dialogue in it:

I said, “They’re not cockroaches, they’re bedbugs, and they’re eating you.”

Those two welts on Marlo’s legs made me feel super delinquent about all the traveling that I have done without being cautious about encountering bed bugs. And so first and foremost, I will be traveling with one of these things from now on. It’s super easy to use, and because bed bugs are notoriously difficult to spot with the eye it will become as essential as my travel-sized hair dryer, the bag of extra cords and chargers I have tucked into the bottom of my suitcase, and all those protein bars I have stuffed into my purse because you never know if you’re going to get stuck somewhere and all they have on the menu is black licorice.

Or coconut. Ugh. The list of foods I cannot tolerate is surprisingly small given how picky I was growing up, but coconut appears about seven times on that list. If you even think about tricking me into drinking a sip of coconut water, I just might pay to have you kidnapped. Just a sip of a kidnap.

The Ortho Home Defense Bed Bug Trap (you can find them here: http://www.ortho.com/bedbugs) uses a newly-identified, patent-pending attractant pheromone to lure bed bugs out of hiding by tricking them into thinking they have reached a safe shelter. The trap then holds them permanently in a sticky pad, allowing me and you to quickly confirm their presence through a viewing window. That’s when you are totally allowed to lose your mind. No one gets to make fun of your reaction, not even Marlo. And she’s ruthless.

I have set one up in Marlo’s room since her legs were ground zero for my cause of worry. The traps can work in as fast as an hour. You just push down on the top of the trap until you hear a click and monitor it by peeling back a viewing window. If you detect them in your home, you can use a whole line of Ortho bed bug treatment products—for instance, with Ortho Home Defense Dual-Action Bed Bug Killer, a fast-acting aerosol that kills bed bugs and their eggs—or call the number on the viewing window. If you find them in a hotel, you are totally allowed to lose your mind. No one gets to make fun of your reaction, not even Marlo. And she’s ruthless.

It’s now available at most major retailers and Amazon where you can also find the whole Ortho product line to fight bed bugs, all for under a fraction of what I would pay for peace of mind.

I’ve had this trap in Marlo’s room for three days, and the good new is I’ve caught nothing so far. The bad news? Don’t let your eight-year-old know that you’re putting a bed bug trap in her room, especially one where you can peel back a flap to see if you’ve caught any. Your eight-year-old won’t sleep a wink that night and will ask seven times an hour, “Are there any in there yet? What about now? Now? Now? You sure? Check again. How about now?”