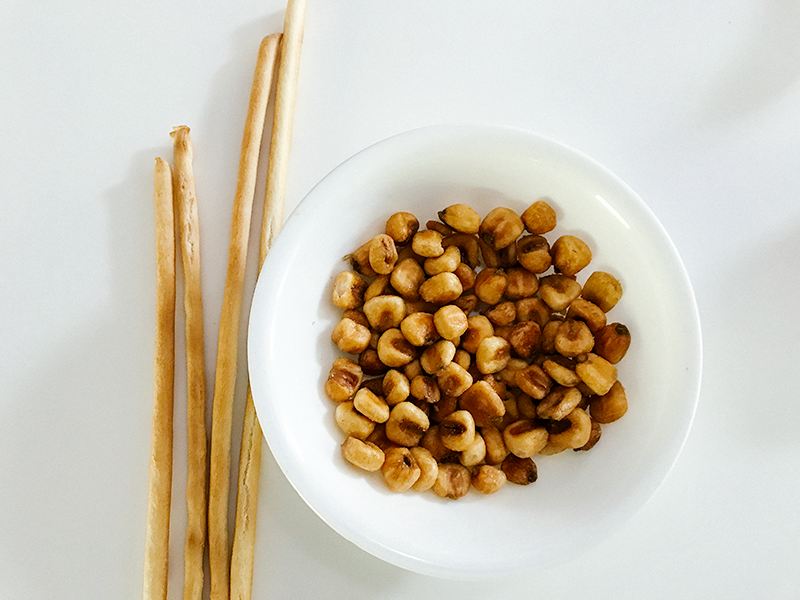 I developed a terrible habit of eating corn nuts while I was in Paris—record scratch. Yes. I just typed corn nuts and Paris in the same sentence, and it is all Paris’ fault. They sell them in these clear bags right alongside raw almonds and walnuts and dried apricots to make you think, oh! Look at these crunchy little organic kernels of health! I must have some to complement the dinner I will eat at 10 PM. Which is a little early, I know, forgive me.

We’ll start with a couple of glasses of the most incredible wine you’ve ever tasted and forget to get around to the actual food. You thought there was some undiscoverable secret as to why Parisians are so thin? Lean in and let me whisper it in your ear: It’s called calorie restriction. But, shh! Let’s continue to delude ourselves into thinking it’s just their joie de vivre!

So now I buy them here, at home, in America, where corn nuts are Corn Nuts, translated ARTERY CLOGGER—this is only slightly different from ARTERY BLOGGER—and last week after dropping Marlo off at a mid-week piano practice I realized I didn’t have any in the snack drawer at home. TANGENT: Marlo had a friend over for a playdate this weekend and while passing through the kitchen on the way to her room she asked her if she wanted some goldfish crackers. Without waiting for an answer Marlo grabbed the handle to the snack drawer and pulled it open to reach inside, and her friend jumped back in horror and gasped, “That’s a HUGE snack drawer!” Exactly as if she were looking at a dead body.

What can I say? My kids are snackers. They’d much prefer a plate of assorted and multi-colored carbohydrates, each an unnatural texture and shape, than a hearty bowl of soup. They practice calorie restriction without knowing what calorie restriction is, so I have a drawer the size of a coffin full of calorie-filled things that they will ingest so that they don’t wither up and fall over. Right now there are three giant tubs of Nutella occupying a ton of real estate in that drawer because you know what you can dip into Nutella? Anything! Including things with nutrients! Broccoli and chocolate? Mmm mmm good!

Back to the Corn Nuts: So I stopped by the 7-Eleven around the corner and started to approach the man at the checkout with a couple of bags in my hand when I suddenly realized, “I am approaching the man at the checkout, and I only have two bags of Corn Nuts in my hand. That’s it. Nothing else.” Turns out this is way worse that the dream about showing up to high school completely naked.

Who does this? Someone who is up to no good, is who! That person is going to pull come crazy ass shit, is who! I think even someone cracked out on meth would be in their right mind to think, “This looks highly dubious. I should grab some Twizzlers and an energy drink, too.”

I don’t even have the excuse of being high! If I’d been high I would have approached the counter with arms full of things that make far more sense than what I was carrying completely sober.

“You having a good day?” he asked me as I placed two bags of Corn Nuts and on the countertop. Two bags of Corn Nuts. That’s it. Nothing else. I nodded and mumbled an affirmation to let him know that I wasn’t ignoring him, that I wasn’t trying to hurt his feelings by not looking in the direction of his face. AS IF HE CARED. Because I am fucking crazy.

“Will this be all for you?” he continued with the exact question, the precise words I had hoped he would not ask me because YES. I CAME TO 7-ELEVEN JUST FOR SOME GODDAMN CORN NUTS. I expended precious fossil fuel and went out of my way for two bags of Corn Nuts and I wanted to assure him that I am a decent human being who cares about the planet and I wasn’t about to do anything weird or freaky although I might go back to that aisle and grab two more bags because you should see how fucking huge my snack drawer is.

You guys. I made it out of there with my dignity all caught up in the back of my throat. I was ready to puke it up all over my shoes, but I left that 7-Eleven with just two bags of Corn Nuts and nothing else. And I was really proud of myself for not caving in and grabbing all sorts of things I didn’t need like watermelon gum and roasted sunflower seeds and a Mountain Dew Slurpee, until I went back to that same 7-Eleven again yesterday to gas up my car. The pump told me I had to go inside to collect my receipt, and YEP! OF COURSE! Guess who! Same guy was at the counter and the moment I walked in he pointed at me and yelled, “Corn Nuts!”

That was a super fun gas receipt. So fun that I walked over to that aisle, grabbed two more bags of Corn Nuts, slapped them down on the countertop like a royal flush and said, “Damn straight, Monsieur.”