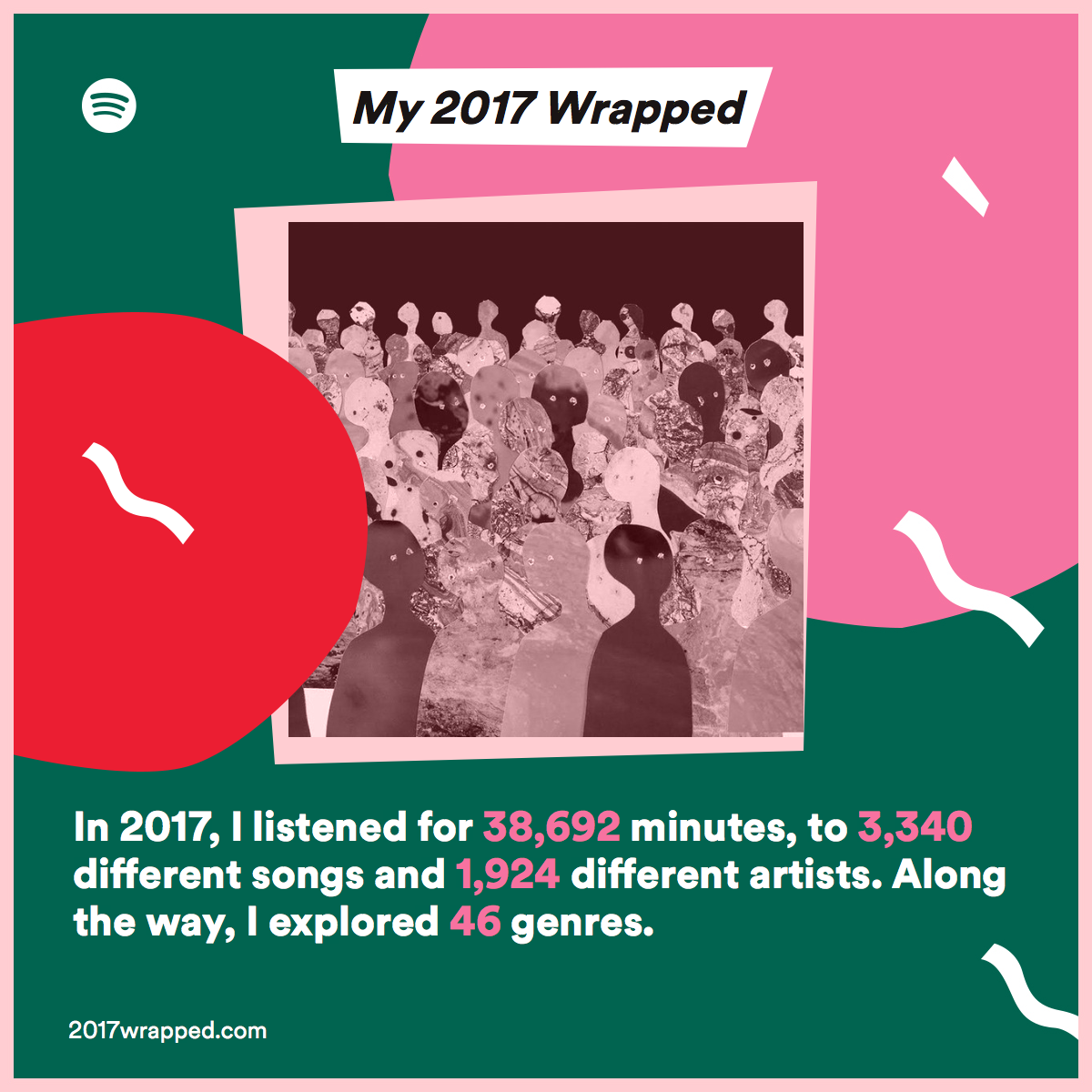 Last week Spotify released its year end summary of user’s listening habits, including an individualized playlist of someone’s most played songs of the year. First of all, the timing of this is almost as egregious as Costco playing Christmas music the day after Halloween. GRUMBLE. There’s an entire month of the year ahead of me, and you’re going to tell me that whatever I listen to in the next four weeks doesn’t count toward this analysis? What if I were to discover my favorite song of all time—this won’t even hypothetically happen because no moment in music will mean more to me in my lifetime than the build that starts at 3:37 in Radiohead’s “Let Down”—BUT LET’S JUST GET HYPOTHETICAL FOR A HYPOTHETICAL MOMENT.

Four weeks, Spotify. That’s an awfully long time to discount when it comes to me and my ability to discover music that I really, really like. No need to box me in like that, bruh.

I’d been eagerly awaiting this year-end examination because I was certain that I knew exactly what my top five or six songs would be, each one of them for a reason of their own. And the rest of the list would all be from my June playlist because I listened to those songs for hours and hours and hours while wandering the streets of Paris alone. Goddam, those hours. Some of the best hours of my life, hands down. I love my kids, sure, but anyone who has fallen love with Paris is like, “Kids? What kids?”

And I was right! Sort of! The playlist on my app does not match up with the platform they used for the analysis AND I HAVE SOME SERIOUS QUESTIONS. First, remember when I said that “Strangest Thing” by War on drugs was going to be the best song of the year? Yeah. Second most played song of my year:

SPOTIFY YOUR ALGORITHM HAD A HICCUP. POSSIBLY AN ANEURYSM.

Also, you can see exactly where my children’s vehement request for a certain song threw things off a bit. Although, that song? And when and how it was released? Such an interesting study in All The Things I Have Learned In Therapy About Toxic Dynamics And How To Identify When Someone Is Gaslighting Me.

“Nobody made you do anything, hun” should be one of the official themes of 2017.

Second, can we talk about my child and the superhero comic that needs to be based on her personality?

People saw this and immediately told me to look up synesthesia which, I will admit, I may not remember ever paying attention to that word if I had ever heard it before and immediately thought of some kid looking at words on a piece of paper and seeing highlighted, zigzagging messages from aliens. And suddenly Marlo is abducted by the government. That’s where my brain went. It didn’t go to “perhaps your child has an interesting way of perceiving the world.” It jumped straight to “WE ARE ALL GOING TO DIE ALONE.”

A close friend of mine named Heather even called me (I ANSWERED A PHONE CALL WHEREIN THE PERSON DID NOT TEXT BEFOREHAND BEHOLD THE LOVE I HAVE FOR THIS PERSON) and said that her father experienced synesthesia. He’d always told her that her name was brown. And you know, I’m fine with that. Like some people pointed out, dirt helps things grow! Plants and trees and crops that feed people! And here I am helping Marlo grow—yeah, no. Whatever. I’m not going to pretend that “your name is dirt” is even remotely flattering. Fuck you, dirt.

But then I googled “synesthesia” and started to think about both of my kids and how they talk and learn and I remembered when Marlo was not even three years old. I was putting her to bed and singing her the same four songs I’ve always sung at night when she started to beatbox to “Twinkle, Twinkle Little Star”. And it sounded amazing. Perfect. Like she’d been practicing it for months, except she was just improvising. Cue to a week ago when I was driving her to her therapy session which at that time of night is a 45-minute drive to and from. I’d downloaded my Top Songs of 2017 playlist to my phone and set it on shuffle. These are the songs we have listened to on the drive to school every morning this year—whenever we were in the car, really—and that kid knew every single word to every single song. More than I did. She’d tap the back of my seat in rhythm with drum solos and I almost pulled the car over, turned around and said, “GIVE ME BACK ALL OF THOSE YEARS YOU TOOK OFF OF MY LIFE BECAUSE YOU WHINED ABOUT PRACTICING PIANO, MAESTRO.”

Now, hold up. Shut it. Don’t give me your sad little story about hating piano practice and how it’s the worst memory of your life and if only your mother had understood NUH UH. This kid has performed in front of judges twice now and scored a superior both times. She gets music. Music runs through her body. I recently watched her strum a guitar while someone else played the chords to a song she had never heard, and she intuitively knew when to pause, when to stop, when to dramatically begin strumming again. I’ve never seen anything fucking like it. It blew my mind to bits. I have still not recovered. When the song was over we were all like, how? Why? When? DUDE! and she was all DUH, IDIOTS.

She stopped short of calling us all “half-assed dimwits” but I am going to encourage her next time.

That night I gave them both a “test” of sorts where I read out numbers between one through nine, all in a random order and told them to tell me what color each number is—Marlo has since told me that when she speaks she sees the words spelled out in front of her, each letter a different color, although some words have a color all their own. Marlo thinks seven is red, Leta thinks it’s purple. Marlo thinks nine is green, Leta thinks it’s pink. For two, Marlo answered “White.” Leta answered, “It has no color.” Two days later I gave them the same test with their previous answers in my hands and they gave me the identical answers they had given me the first time. You guys. I don’t remember the color of the shirt I put on today. I’m removing my coat to check. Oh! It’s green! I totally forgot! AND I PUT IT ON LESS THAN FOUR HOURS AGO ON PURPOSE. I think the color of my eyes is blue but I’m old and I’d have to check.

Thirdly. Item number three: of course my most played song of 2017 is “Answer” by Phantogram. Of course it is. Absolutely. I knew it would be the night that I heard it for the first time and then sent him a link to it via text. And waited for his response. And he texted back, “The 2:15 mark is awesome.” I already knew I was in love with him, and that response only confirmed it.

I knew that moment would catch him like it caught me. Check out the 2:15 mark: