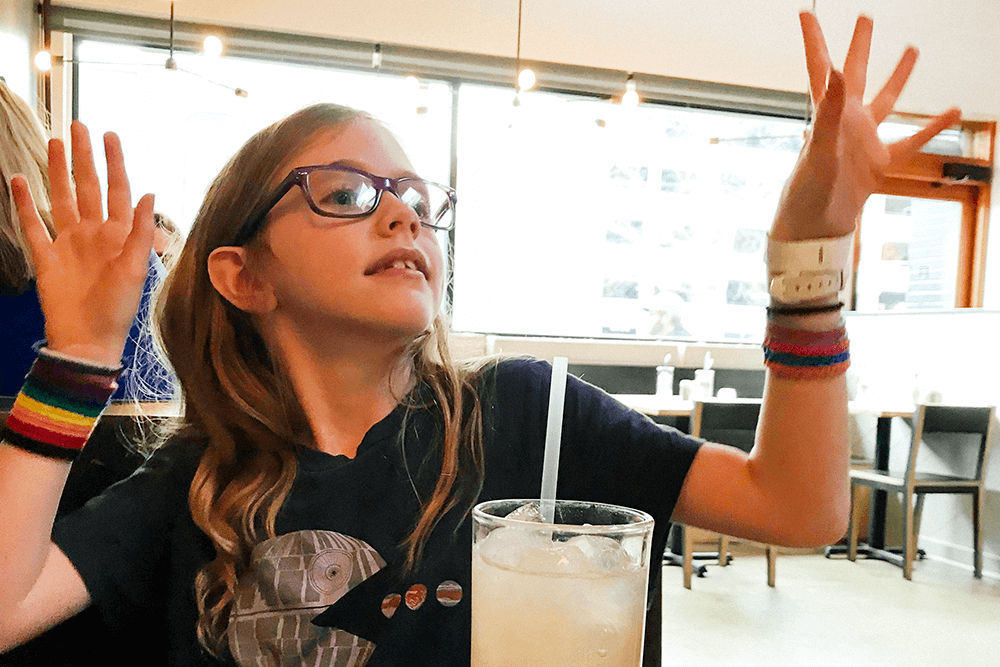 Last week I met my book deadline, sent it to my editor on the 18th exactly two years after running the Boston Marathon. I go into great detail in the book about how training for that marathon sent me into the worst spiral of depression I’ve ever experienced, but you’ll have to read it all to understand why. HINT: It’s probably a bad idea to act astounded at how much food your girlfriend is consuming in order to run 35 miles a week and even worse to express that astonishment. Because then she might have to claw your face off.

Now begins the revision process, the editing and rearranging. I already cut out a part about a run-in with a rogue catamaran and the night I spent in a Guatemalan prison. I also didn’t leave in the paragraph about the fried crickets I accidentally ate because I had put them in my mouth to eat them. True story! I even saved a few to mock the trend on Pinterest and Instagram of people taking photos of disembodied hands holding an ice cream cone (photo in this post). STOP DOING THIS. First, people in this world are dying and you are taking a photo of your fucking hand holding a fucking ice cream cone. Wake up. Second: WE KNOW YOU DID NOT EAT THAT FUCKING ICE CREAM CONE. The whole thing is a lie. You’re a liar. Change your username to FRAUD.

I do not have a strong opinion about this as you can tell.

I have let life sort of pile up around me as I scrambled to meet my deadline, quite literally. There are over 300 books people have sent me sitting on the floor of my office, all in teetering, haphazard stacks. I’m paying Leta to help me go through them all so that I can feature them here at some point—she’s saving up to take a cooking class so that I will stop bugging her to fix me a damn hot dog. And I have never let my desk become so cluttered with paperwork and bills. I find it impossible to concentrate when I cannot see the surface of my desk so I am currently writing this on my laptop in my living room as I stare at the overflow of books piled two-feet high on the coffee table. And yes, I am wearing pants despite the official mommy blogger dress code. They’re gonna put me on probation.

I also couldn’t get to the grocery store before the weekend, before I found myself in a situation wherein I would be forced to grocery shop with Marlo. In case you didn’t know this about me: I don’t shop with children. ANY kind of shopping. I hate to shop, every kind of shopping, and I love my older daughter so much that for her birthday I took her to Old Navy so that she could use a gift card someone had given her and I pretended to appear perfectly calm the entire TWO HOURS she picked out clothing when in reality I was choking back a full-on panic attack. Like, I really thought I might pass out and knock over a giant display of plastic flip-flops.

On Saturday Leta went bowling with some of her friends, and we were totally out of milk, white cheddar Cheese-Its, Unicorn Marshmallow Lucky Charms, and pasta noodles. That is the current menu my children eat—sometimes Leta gets a little wild and agrees to ramen—and after I dropped her off I had to take Marlo with me to the grocery store. She wanted to steer the cart, and immediately she proved exactly why I don’t shop with children. That kid would not stop ramming me in the back with that thing, and eventually when I’d stopped to look at salad dressing only to feel the cage of the cart nudge me yet again in the butt I turned to her and said through clenched teeth, “If you do that one more time I am going to empty out the Lucky Charms and remove each and every single one of the unicorn marshmallows SO HELP ME GOD.”

Later that night when Leta realized that the food drawer had been stocked with white cheddar Cheese-Its, she thanked me for providing her with nourishment. And I was like, yeah. About that. When I told her Marlo had accompanied me, her eyes got big and a huge smirk appeared on her face.

I chuckled. “Well, you see. There’s this thing about Marlo—”

I let out a giant cackle. “It went exactly like that,” I said.

Also, in reference to the title of this post, does anyone remember the Walmart commercial from the very late Nineties featuring two women dressed as clowns who work as greeters at the front door? And one of them says at one point, “Shoppin’ to me is fun!” And she says it in kind of a Southern accent, and she says it like they accidentally caught her saying it to her dog because she doesn’t have any friends. Me? I’m the only one who remembers? Whatever. 20 years later, I still say that line in that exact accent anytime someone tells me they are going shopping. Good luck out there SUFFERING.