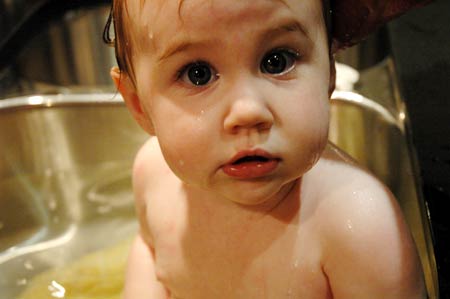 You turned ten-months-old a few days ago. Why didn’t I write this a few days ago? YOU’RE NOT ALLOWED TO ASK QUESTIONS LIKE THAT YET.

One thing that needs to be discussed right now, up front, before anything else:

YOUR WILL. IT HAS BEEN MADE KNOWN.

Somewhere in the last month I crossed that line from caretaker of a baby to caretaker and disciplinarian, and I’m not so sure I’m ready for this. I certainly didn’t think it would happen this soon, and to demonstrate just how little I know about disciplining a child I’ll recount for you a scenario that happened over the weekend while we were staying with my mom:

I had you sitting in my lap and had given you a magazine to entertain you, but when you started tearing out full pages of that magazine — it was Grandmommie’s magazine, and if you didn’t notice already, nothing in Grandmommie’s house gets TORN UP, ARE YOU CRAZY? — I promptly took it away from you. That was the first dumb thing I did, I realize now, because you just don’t take away something from a baby without replacing it with something else. I guess this is what they refer to as distraction, or the phenomenon called Babies Don’t Know No Differnt.

Once you realized that the magazine was indeed no longer in your possession you began screaming, so I turned you around so that you were facing me and I said — and I can’t believe I’m going to admit this because it is just so dumb — I said, “Leta, that’s unnecessary.” Unnecessary? UNNECESSARY? Who says that to a ten-month-old? Like you would understand perfectly that the situation called for a more appropriate response.

After the word UNNECESSARY left my lips you did something rather horrifying, and I’m still trying to recover. You, you CLAWED AT YOUR FACE you were so mad. Literally CLAWED. You were just so furious that you couldn’t think of any more rage-filled way to portray your disgust. WITH YOUR OWN HANDS YOU CLAWED YOUR FACE. I immediately turned to my mother and said, “What the hell have I given birth to?” And she did that annoying grandmother thing and walked over to comfort you because I had been SO DAMN MEAN by making sure you didn’t destroy her precious magazine. And you know what you did? YOU KNOW WHAT YOU DID? You reached your arms out TO HER signaling that you wanted HER and not ME. Just for that you can’t date until after you’re married.

My friends with kids use words like NO and STOP to signal that someone should cease being involved in what they are doing, but not me. No, I use words like UNNECESSARY and LET’S DISCUSS and PLEASE ELABORATE. I honestly don’t think I’ve ever told you NO, it just doesn’t come to me. If you pick up the scissors I accidentally left LYING RIGHT THERE next to you, I’ll grab them and say, “Why would you want these? The metal on your tongue will taste acidic!” Leta, your mother is a freak. I’m warning you now so that you can warn your friends later.

Over the past month you have discovered that you can just SCREAM, and it’s not like all the screaming you did before. Sometimes you scream because you’re distressed, yes, but now you’re usually screaming because you seem to like the fact that you can actually make such an annoying noise. It’s like you’ve discovered this talent, like singing or dancing, except your talent is making this high-pitched BAAAAAAAAAAAHHHHHH! and the H’s at the end are so off the scale that only the dog can hear the pitch, and Leta, you’re giving him seizures. You do this scream CONSTANTLY, no like seriously, all the time. A few weeks ago we were driving somewhere and you sat in the backseat and did that scream for thirty minutes straight. Jon turned to me and said, “Does she do this all day?” And I nodded, and he continued, “YOU ARE A SAINT, WOMAN.”

And then I turned to him and said, “I apologize for what I’m about to do, but it must be done.” And then I turned the radio down, gripped the steering wheel, and yelled as loud as I could, “SHUT UP!” Except it went more like, “SHUUUUUUUT UUUUUUUP!” And I know I’m going to get email from people telling me that I should never say such a horrible thing to my child and I’m going to tell those people right now that THEY WOULDN’T LAST 10 MINUTES WITH YOU. And anyway, I wasn’t yelling it at you, really. I was yelling it at the Universe which has seen fit to punish me with the child that was supposed to have been sent to my brother as punishment, but things just got messed up. You and your uncle can just go throw fits together, okay?

You’re probably wondering at this point in the newsletter if I have anything good to say, and I do, I’ll get to that in a second. But there’s all this other stuff that you keep throwing at me AND I NEED A MOMENT TO CATCH MY BREATH, PLEASE:

1) You’ve learned how to undo the velcro straps on your diapers while you’re lying on the changing table.

2) You pee on your father one out of every three times he carries you to the bathtub.

3) When you’re really mad, as opposed to your normal moderately angry mood, you tighten up your whole body and grunt, hold your breath, and steam actually comes out of your ears.

4) You must have something in your hands at all times, or you remember that scream I told you about? Yeah, that scream happens, and when we’re in public places that can be embarrassing. Like the time I took you to the grocery store and you wanted to hold my keys or my wallet and NOTHING ELSE. I tried to give you a candy cane, NO. A box of doughnuts, NO. An US Magazine with Jessica Simpson on the cover, NO. But you kept dropping my keys, and I don’t want you to eat my driver’s license, so I gave you neither my wallet nor my keys to hold. So you did that hand waving thing you do, which is normally very cute, and that BAHHHH BAHHHH thing simultaneously. So I was that woman running at the grocery store with the frog in the front of the cart waving its arms and screaming. By the time we got to checkout I had given up so I shoved my wallet into your mouth and plugged you up like a leaky pipe. So not only did you eat my driver’s license, you covered my debit card in snot. And I lost all my dignity.

Are we there yet? To the good parts? There have to be good parts right? And there are, baby girl. There are, like how you hug me and put your nose to my nose. Like the way you smile when your father comes home from work. Like the way you kick your frog legs before the bath. Like the sound of your laugh and how it heals my heart. Like the size of your pearl-white thighs and how you’ll let me gobble them up. Like how you know which button to push to turn on the TV. Like how you play with the dog’s collar and he licks your face. Like when I do give you my keys you don’t scream for at least ten whole minutes. Like the curve of your round belly and how it hangs over your pants. Like how you love books and their pages and say, “GO GO GO,” as you turn them. Like how I can pick you up when you’re crying and you’ll put your head on my shoulder and try to get closer.

There are so many good things, and I think we’re both learning our roles as mother and daughter, caretaker and torturer. As your father was leaving for work this morning you were sitting on the living room floor screaming, and I said to him, “I plan on having a good day, but you hear that? If I have clawed off my face by the end of the day THAT’S WHY.” And then I made a silent promise to learn how to say NO and YOU ARE THE LIGHT OF MY LIFE much more often.